The Committed Indian Goes Year Round

Share All sharing options for: The Committed Indian Goes Year Round 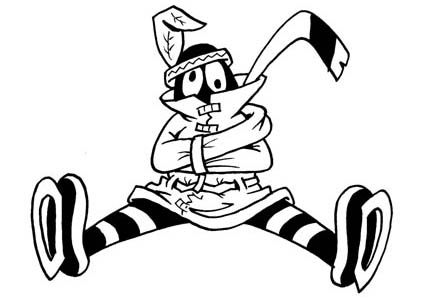 Though it seems a bit odd to say a little more than a mere 24 hours since Lord Stanley's was lifted, thanks to the Hawks power play, Hawks fans' eyes have been turned to the 2012-2013 season for a while now. And we here at the lab got to thinking that this is a pretty big offseason for the Hawks. It's already been eventful, that's for sure. And we thought to ourselves, "Just because the Hawks aren't playing doesn't mean there isn't a lot to read and write about."
Because of that, we're going to try something new in the coming weeks. The Committed Indian - Summer Editions. That's right, we're going year round. These will be online only, slightly scaled down versions of the publication that you've come to love. Or barely tolerate. But that's really the same thing. Our first one will be a Draft Review Issue, which will drop two weeks from today. We'll have a Free Agency Review Issue, as well as a Prospects Camp/Convention Primer or Review (haven't decided). Of course, we'll have to make some stuff up for August, so you all might want to prepare for The Committed Indian's Chicago Bears preview. Because really, why not?
What does this mean to you? Well, we're going to offer our special discounted price for a season subscription of $65 now instead of in September. You'll get the five summer issues, the 41 regular season, and the playoff issues with that. It'll be on offer on until the Draft Issue drops, and then our normal price of $75. So hey, you can save a whole $10, which just might cover a beer the next time you're at the UC. Unless Rocky has his way. For those of you who regularly buy the hard copy outside the UC, don't worry. There's a summer only subscription as well.

Normal sign up methods. You can go to Second City Hockey and hit the link on the left of the page, or just hit this link below:
Committed Indian 2012-2013 Subscriptions
The bottom line is, I love doing this thing, and you all seem to really enjoy reading it. So why should we stop either for five months?