Rock Out With Your Lockout

Share All sharing options for: Rock Out With Your Lockout 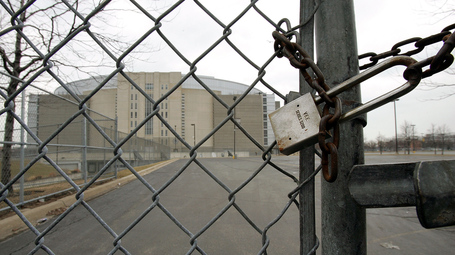 Here we are on Lockout Eve 2012 and I am left wondering if the NHL has learned anything since 2004. This will be the third work stoppage during the reign of Gary Bettman. It is very easy to blame this all on Bettman, and he does deserve a lot of scorn but it isn’t his entire fault. First off Bettman is just a puppet for the owners, they want the lockout. And secondly, just like in any labor dispute, both sides are to blame. The players’ hands are dirty as well and they deserve to be thrown under the bus too.

Most labor disputes these days are not about workers rights like they were when unions were formed many years ago. Be it hockey players, school teachers or airport workers all work stoppages revolve around the almighty dollar. If the players were walking away because they wanted rule changes to promote their own safety than it would be easy to side with them. But that isn’t the case. Both sides are bickering over how to split up a giant money pie, a pie that has plenty to go around and is growing.

When we lost the entire 2004-05 season the NHL’s revenue was 2.2 billion dollars. Under the most recent collective bargaining agreement the league’s revenue grew to 3.3 billion. Now both sides are falling all over themselves to figure out how this fortune should be divided. What they fail to see, or chose not to care about, is that the league cannot handle another long work stoppage. The NHL has finally recovered from the last lockout with record revenue streams and the highest playoff ratings ever. All that momentum loses steam with each passing day where no hockey is played.

The NHL has excitement in the three biggest markets in North America right now. The Los Angeles Kings fans are excited over their team’s first Stanley Cup defense. The New York Rangers made it to the Eastern Conference Finals last season and made a big trade for Rick Nash this summer. The Blackhawks are as popular as ever and are selling out every night. The rabid and loyal fan base in Minnesota can’t wait to see their new free agents Zach Parise and Ryan Suter, who their "broke" owner signed to big money contracts. There is big excitement in Carolina this year, where the game is growing, and they added Jordan Staal and Alex Semin to make a run at the Stanley Cup this year. All of this excitement is lost with another long lockout.

The owners have their billions and the players have their millions. They can afford to wait this out to see just how much more money that can squeeze out of each other. We are the ones who pay the price. The fans, the consumers, the suckers…..