A Tribute To My Hero

Share All sharing options for: A Tribute To My Hero 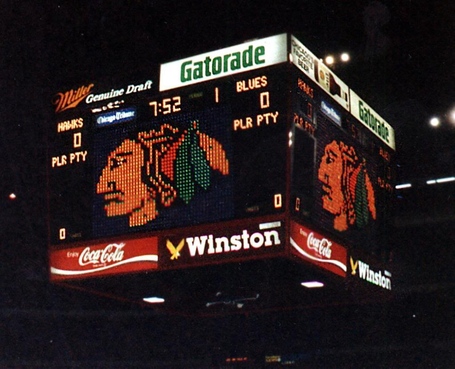 At 5:40 this morning my father lost his nearly two year battle with pancreatic cancer. I wouldn't be part of the Chicago Blackhawks community if it wasn't for my mom and dad. Some of my parents first dates were spent in the standing room only section of the Chicago Stadium watching the likes of Bobby Hull, Stan Mikita and Glenn Hall become legends of the game. Dad instilled the love of hockey in my sister and I at a very young age. We always looked forward to our trips to the Stadium for a Hawks game.

Dad used to tell me stories of how Gordie Howe was the dirtiest player he'd ever seen until Bobby Clarke showed up in the 70's. He told me how he used to yell at Eric Nesterenko to "hit him with your purse!" I loved listening to the story of the 1971 Stanley Cup Final. Dad was in the Army and stationed at Fort Lee in Virginia. Mom and dad had to give away their tickets to Game 7 against the hated Montreal Canadiens. They searched up and down the AM dial to try and find a station carrying the game. They could faintly hear the game and were heartbroken as the Hawks blew a 2-0 3rd period lead of the final game.

One of the greatest thrills I've had in recent years was being able to take dad to games in my seats. Coming full circle, as I have been learning, is a very important part of life. I took dad to the Hawks game on January 9, 2011 as it was Heritage Night honoring the 1961 Stanley Cup champions. It gave dad a chance to see his heroes all on the ice again. This would be the last game dad would ever go to in person. The ticket stub to this game just became one of my most cherished keepsakes.

I will miss my dinners at mom and dad's house watching the NHL package on tv with dad. He used to tell me what team's announcers were his favorite and which ones he couldn't stand. That is insight that can never be replaced. He hated when defensemen would try and pass the puck through the neutral zone. He would yell "skate!" at the television as if he was the head coach standing behind the bench.

Dad gave me the precious give of life and followed it up with the priceless gift of love. Even though he is physically gone he will live inside of me forever. I will see him at every Blackhawks game where a father is explaining what icing is to his young son or daughter. I will hear him every time someone yells "hit him with your purse" or demands that a defenseman skates. I love you dad, my hero, my rock, my best friend......