The Blackhawks stole 2 points from the Detroit with the help of tremendous penalty killing and goaltending.

For the first time this year, the Blackhawks looked like they were finally feeling the effects of the condensed NHL schedule. For the majority of the 1st period it was the Red Wings who looked they played the night before and not the Hawks. Chicago dominated most of the opening frame with fantastic puck possession and a great pace to their game. The Hawks were able to cash in on an early Kent Huskins penalty to take an early lead. On a side note, you know you defense is in trouble when you have to pull Huskins off the fossil pile for your blue line. Duncan Keith was given space to shoot and he took advantage of it by blasting a shot over the shoulder of Jimmy Howard, murdering an innocent water bottle in the process. Brent Seabrook and Marian Hossa assisted on Keith's first goal of the year. The Hawks had a few other scoring chances in the period but could not convert. Even as good as they played, I was a bit worried it was only 1-0 after the first 20 minutes.

The Blackhawks spent a good portion of the 2nd period shorthanded, including giving the Wings a 43 second two man advantage. Detroit's power play looked lost and couldn't really put any sustained pressure on the Hawks. The few times they were able to produce a quality scoring chance, Corey Crawford was there to stop it. For a minute there I thought they had hired Mike Kitchen away from the Hawks, in between periods, to coach their power play unit. The Wings were 0 for 5 on the power play last night and have just 2 goals in 26 chances on the season.

The 3rd period was more of the same, the Wings were skating circles around the Blackhawks. They looked so exhausted that I ran out of breath just watching them. Detroit finally got a puck past Crawford when no one but a body on Johan Frazen and he was able to bury a Damien Brunner rebound for his first tally of the year. The Hawks had to hang on for dear life for the final 15:30 of regulation. I was relieved about getting a point out of the game once it was forced into overtime. At 2:45 of the extra session Viktor Stalberg and Nick Leddy proved that speed kills. Stalberg was able to gain the zone and found Leddy trailing on the play and he slapped the puck past Howard for the 2-1 victory! The Blackhawks did what good teams do, they found a way to win a game they had no business winning.

* The Blackhawks special teams have been brilliant so far this year. The penalty kill has been very good having killed off 22 of 23 penalties this year. The power play is much improved as well. They have converted 7 of the 26 chances into goals and have scored a PPG in 5 out of the 6 games. Sure they still have their "clown shoe" moments but, as a whole the unit looks much improved from the disaster it was a season ago. Good special teams go a long way in the NHL, especially in this shorten season.

* If this is the Corey Crawford we are going to get all season long then we have a lot to be excited about. I was a Crow doubter going into the year so I am very happy to see the drastic improvements in his game. Through 5 starts Crawford has a 1.78 goals against average and a .933 save percentage. It will ask a lot to have him keep up those numbers but a confident Crow is a good Crow.

* In case you haven't seen it yet, here is one of the funniest Dave Bolland pictures you will ever see! 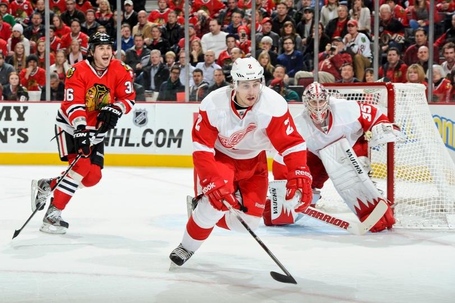 * The top defensive pair of Duncan Keith and Brent Seabrook are a combined -9 while the rest of the unit is +14. Keith has been much improved but Seabrook still needs some work. He looks slow and flat footed out there. I bet he wishes that he joined his teammates at Johnny's IceHouse a bit during the lockout. I am encouraged that Hawks defensemen have combined for 17 points in six games.
* This just in; Todd Bertuzzi is still a raging rectum!
* It was good to see Marcus Kruger getting some props by being named the 3rd Star of the Game. He was awesome on the PK. He might never develop into an offensive threat but he is a solid player. Michael Frolik was another player that didn't do much on the score sheet but had a great game. He was everywhere on the ice and skating at a high level, especially in the 1st period. He did a great job, along with Kruger, on the penalty kill. Great teams have roll players, like these two, who are willing to get their hands dirty.
* Even though they are not going to be the Hawks main competition in the Central, it is still nice to have a 8 point cushion on Wings already.

The Blackhawks will now get a well needed two days off become kicking off their season long six game road trip on Wednesday at the Minnesota Wild. The Wild blew a 3-1 lead to the St. Louis Blues last night and lost 5-4 in OT. Thanks a lot jerks!