The Blackhawks right the ship after a rough final minute of the 1st period to be the Islanders 3-2.

Share All sharing options for: Recap : Not Too Sh-Khabby

The Blackhawks accomplished exactly what they set out to and that was taking 2 points from a pretty solid New York Islanders.  The played a pretty complete game and dominated in the puck possession game, which is when they are at the best. It wasn't all pretty, there were far too many turnovers in the defensive zone, but in the end it got the job done.

The Blackhawks got the scoring started at 9:32 by taking advantage of a tired Islanders 4th line.  After keeping the puck in the New York zone for quite some time, Niklas Hjalmarsson set up shop behind the net. He was able to make a perfectly placed pass across the Islanders' crease to the waiting stick of Joakim Nordstrom, who converted for his first career NHL goal.  Jonathan Toews doubled the Hawks lead by blasting a shot into a wide open net.  Duncan Keith blasted a one timer from the point that went wide but bounced off the end boards directly to Toews.  Brent Seabrook picked up the secondary assist.  The Islanders would score twice in the final minute of the period to tie the game.  The first one came from Josh Bailey after Michael Grabner flew through the neutral zone during a delayed penalty.  The second came from Kyle Okposo, with less than 5 seconds to go, after more sloppy play in their own zone and too many Blackhawks getting caught watching instead of playing defense.

The Hawks were able to keep the puck alive in the offensive end and it led to the first goal of the year for Michal Handzus.  Keith ripped a shot from the point and Kevin Poulin gave up a big rebound.  The puck hopped over the stick of Brandon Bollig but Handzus was there for the put back.  Ben Smith got his first point of the year with the secondary assist.

There was no scoring in the 3rd period but that doesn't mean it didn't have it's drama.  Both teams had to kill off penalties and the animosity was turned up a notch.  Handzus and new father Matt Moulson got involved in a bit of skirmish in front of the benches. Andrew Shaw chirped Moulson from the box as he was already in there serving a tripping penalty.  The Hawks made it through the dreaded final minute of the period and came out with two points.

The winless Sabres are in town tomorrow night with Corey Crawford in net.  Also, Brandon Pirri was just called up from Rockford causing Jimmy Hayes to have a reservation for one at the Rockford Olive Garden on Saturday night.

* Nikolai Khabibulin was pretty good between the pipes tonight.  He was a bit shaky in the 1st period but settled in nicely as the game wore on.  The Islanders were only able to get 19 shots on goal despite taking a total of 40.  The Blackhawks blocked 13 shots and New York send 8 pucks wide of the net.

* Coach Q's line blender was on high speed tonight.  I really hope it doesn't cause the great new site Shift Chart to explode when they process all the data.

* If you had game #4 in the "When Does Bryan Bickell Get Moved Off The Top Line" pool, please collect your prize at the door on you way out.  I really don't think it was a coincidence he was moved off the 1st line after playing some really lazy defense on the Kyle Okposo goal at the end of the 1st period.  Brandon Saad got bumped up to the 1st line with DDN causing some funny feelings in my loins.  Saad actually looked faster when skating with Kane and Toews.

* The special teams were ok tonight.  The power play looked good at times. Patrick Kane seemed to move around the ice much more than usual.  I liked what I saw out of Saad when he got some time with the top unit int he 3rd period.  He was willing to take a beating in front of the net trying to set a screen.  The penalty kill went 2 for 2 tonight which is what you want.  They were saved by a Okposo penalty on their first attempt and were able to withstand the Islanders attack late in the 3rd period.  The Hawks penalty killers did a much better job with getting their sticks into passing lanes and pressuring the puck.  Progress.

* I heart John Tavares.  The only flaw I can find in his game is that he doesn't play in Chicago.  Not only did he have a great lacrosse like assist, when Johnny Oduya gave him some time and space behind the net, but he also did this.

* In case you didn't notice, and you probably didn't, Cal Clutterbuck made his Islanders debut tonight.  He only got 8:35 in ice time but that was enough to finish -1.

* Brandon Bollig attempted a Spin-o-Rama. No, it happened, I saw with my own eyes.  Since he has adopted the nickname B-52, should we use Love Shack or Rock Lobster as his new theme song?

* As you guys know, I am all about calling guys out when need be and also giving credit when it is due.  I have been calling out both Joakim Nordstrom and Marcus Kruger and they both had their best games of the season tonight.  Nordstorm scored his first goal of his career and looked much more comfortable on the ice.  He attempted 7 shots getting 2 of them to the net and dished out 3 hits.  I still think he is in over his head but he showed improvement tonight.  Kruger went 7 for 14 at the dot, but won all 4 of his defensive zone draws.  That will go a long way if he can stay right around the 50% mark. 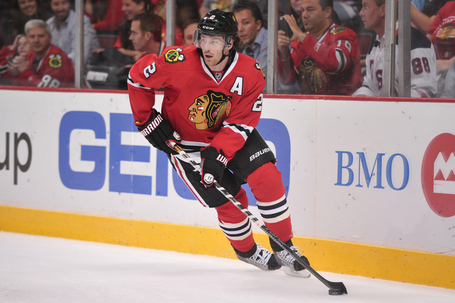 Duncan Keith had himself quite the night. He had two assists, both coming from actually getting a shot from the point to the net.  I like when the defenseman start blasting away from the blue line with traffic in front of the net.  Keith attempted a total of 10 shots, getting 4 on goal and having 3 blocked and 3 miss the net.  He also led the team in ice time, per usualwith 24:02, which was nearly 3 minutes more than any other man in red.