The Blackhawks hang on to go two for two against the state of New York with a 2-1 win over the Sabres.

The scoreboard read 2-1 in favor of the Blackhawks, after 60 minutes, but the game should have seen a lot more goals than three.  Both goaltenders, Ryan Miller and Corey Crawford, were spectacular and kept the goal horn from sounding much more than it did.

The Blackhawks opened the scoring, at 9:26, with some great puck movement within the offensive zone.  Brandon Bollig made a nice pass from the left boards across the ice to Duncan Keith at the blue line.  He passed back to Brent Seabrook who flicked a wrist show towards the net and Ben Smith was in front to deflect it past Ryan Miller for his first goal of the season.  Smith was involved in a scary play a few moments later when Steve Ott boarded him and sent him off to the locker room.  He would return to the ice a few moments later and even did the 1st intermission interview.  Any team that names Ott their captain deserves to suck.  The 1st period ended with the Hawks holding a 20-6 lead in shots but gave me a feeling they should have had a much bigger lead.

After both nearly a full period of both goalies having to make big saves, Patrick Kane doubled the Hawks lead with a power play goal at 19:35 of the 2nd period.  The play started with Kane taking a one time shot that Miller was able to save.  Andrew Shaw was able to dig the rebound out to Patrick Sharp who took the puck around the back of the net.  He was able to make a sweet cross ice pass to find Kaner at the back door for his 4th goal of the season and 2nd on the man advantage.

The Hawks failed to get the puck in deep and then got caught making a slow line change. Drew Stafford got a wrist shot past Crow, at 11:49 of the 3rd period, to cut the deficit in half.  Both teams would have chances over the last 8 minutes of the game to add to the goal total but both goalies stood tall.  The Blackhawks successfully won both halves of their first of 18 back to back games, which should quiet the silly talk of a "hangover."  Well at least until they lose again.  The Hawks are back at it on Tuesday night with a trip to Raleigh to take on the Hurricanes.

* Ben Smith surely looked like he doesn't want to be part of the Rockford Shuffle for the rest of the year.  He was very noticeable on more than just the score sheet.  I was very happy to see him come back after the hit from Steve Ott.  Smith also got some time on the penalty kill, which a role it think he is perfectly suited for.

* It also appeared that Brandon Pirri has learned that he is going to impress Q more with his defense than his offense, which is a great attitude to have.  He was pretty solid on the back check and had one takeaway and blocked shot in 9:29 of ice time. He also won  6 of his 10 faceoffs.

* Ryan Miller is doing exactly what the Sabres were hoping for.  He is playing at a high level to start the season which is only going to add to his trade value.  If he can keep up this level of play it will only cause Paul Holmgren to write an even bigger check come July.

* As good as Miller was, he was helped by a ton of missed shots.  The Hawks missed the net 15 times, 4 of those by Patrick Sharp.

* Marian Hossa did not show any signs of slowing down in the back half of this weekend's set of games.  He finished the game with a game high  6 takeaways.  Hossa is always at his best when he is contributing away from the puck.  The goals will come, watching him play defense tonight made me confidence that he is getting healthy.

* The Sabres were offsides on a 2 on 0 rush, they iced the puck on a power and have scored only 6 goals in games and Lindy Ruff was the problem?

* Any time you need a quick laugh, just remember Mike Gillis traded Cody Hodgeson for Zack Kassian.  What a dope! 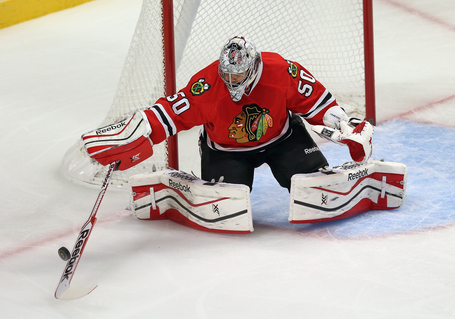 I could have selected either goalie, but this is a Hawks blog so we are going with Corey Crawford.  Saturday was the best game from Crow of the early season.  He did not get tested much in the first half of the game but he was amazing in the final few minutes of the 2nd period.  He preserved the one goal lead before Kaner doubled it in the final moments of  the period.  Who knows what would have happened had the Sabres been allowed to tie the game in the late stages of the 2nd period.