Recap : This Is Shooter's Tour

The Blackahwks blow a 2-0 lead, but comeback to beat the Hurricanes in the shootout.

Share All sharing options for: Recap : This Is Shooter's Tour

The Blackhawks came out like gangbusters on Tuesday night and jumped out to an early two goal lead.  They could not pick up that elusive third goal and let the Hurricanes hang around and eventually coughed up the lead.  In the end the Hawks left with the two points and head back home for a meeting with the Blues Thursday night.

Blackhawks dominated the opening 20 minutes of play and got the scoring started at the 7:56.  Michal Handzus made a great flip pass out of his zone that led Patrick Sharp perfectly past the Hurricanes' defense and into the offensive zone.  Sharp was able to finally get a goal on a breakaway and tallied his first goal of the season and 200th of his career.  Marian Hossa made it a 2-0 lead at 10:08 just as a Hawks power play was expiring.  Andrew Shaw made the play possible by battling the puck away from the Carolina defense.  Brandon Saad shoveled the loose puck to Hossa who flicked a quick little backhand shot past Cam Ward.

The Blackhawks were lucky to get out of the 2nd period with their 2-0 lead.  They had to kill off two penalties but were up to the task.  The Canes outshot the Hawks 14 to 8 in the middle frame.  The good news was that most of the those shots came from the outside and there were not too many challenging shots.

The Canes were able to cut into the Hawks lead at 3:54 of the 3rd period. Eric Staal took a blast from the left of Corey Crawford.  Alexander Semin was able to get inside position on Handzus and was able to slap the rebound back in for his 2nd goal of the year.  Former Blackhawk Tuomo Ruutu picked up the secondary assist.  The Canes tied the game at 12:33 after Joakim Nordstrom could not clear the puck out of the zone.  Ron Hainsey took a slap shot from the blue line that got through a screen and past Crawford.

Neither team could come up with the game winning goal in overtime, even though Carolina got a power play during the extra frame.  Patrick Sharp was the only player to convert on his shootout attempt (no that isn't a typo) to secure the second point for the Blackhawks.

* I am not liking this early season trend of starting off fast and then taking the foot off the gas.  They have blown 2-0 leads against the Lightning, Islanders and now the Hurricanes.  Thankfully they have taken 5 out of 6 points in those games but this is something that needs to end.  You can't start giving away points when you start playing within the Central Division and Western Conference.

* Haven't seen too much of the Corey Crawford is overpaid garbage this week.  Crow was very strong and confident in net last night and he had to be because the guys in front of him did not do too much to help him.  You can't fault him for the game tying goal. It's pretty hard to stop a shot when you are being screened by a teammate all while you don't have a stick.  Crawford was named the #1 Star of the Game and he earned it by making 32 saves, including 4 in overtime, and stopping all three Hurricane shooters in the skills competition.

* The penalty kill is getting better with each game and was a perfect 4 for 4 last night, including having to kill off 2 minutes in OT.  They were helped by a pretty bad Carolina power play that loves to pass so much that even the Hawks' PP unit thinks they pass too much.  Carolina only put up 3 shots on their 4 power play opportunities.  They got a 4 on 3 advantage for a full two minutes in OT, with Brent Seabrook breaking his stick causing Marcus Kruger to give up his for a period of time, and they still only got one shot.  They next time I want to scream at the Hawks' power play for passing too much I will think of that Canes OT power play and shrug it off.

*Pretty easy to say that last night was Michal Rozsvial's worst game as a Blackhawk.  Two penalties, an intentional offsides and screening your own goalie on the game tying goal is the recipe for enjoying the press box spread  on Thursday night.

* Does anybody want to tell Bryan Bickell there isn't a lockout this fall and the season has started?

* You got to see the good and bad of Michal Handzus last night.  His assist on the Sharp goal and winning 55% of his faceoffs were nice.  Letting Alexander Semin go right by him for the rebound  on the Canes' first goal was not.

* The 3rd line was really good last night despite Nordstrom's bad turnover that tied the game up and it wasn't all because of Brandon Saad either.  Andrew Shaw had his best game of the early season. He kept the puck alive on Hossa's goal and was all over the ice. The line combined for 10 shots on goal, 4 each from Shaw and Saad and 2 from Nordstrom.  The rookie even chipped in with 3 hits and 2 blocked shots.  My only problem with the line was Shaw losing 10 of 13 draws.

* Speaking of faceoffs, the Hawks lost 60% of the draws.  Usually when I bitch about how bad the Hawks are at dot I excuse Jonathan Toews from the conversation but not this time.  The captain went just 6 for 21 on the night.  I can't remember Toews ever being that bad in one night. 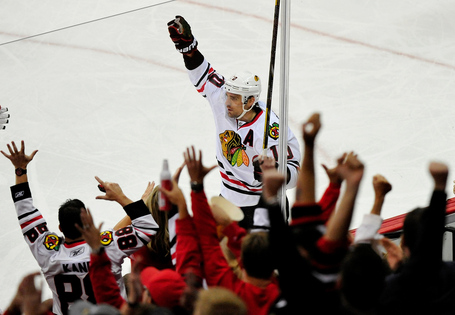 No doubt it's got to be Patrick Sharp.  For all the crap I give him about not being able to score on breakaways and shootouts he sure came through last night.  Not a surprise he finally cracks the score sheet right after the new baby was born. He was probably gripping the stick a less tight last night than he had been while waiting for the arrival of Sadie.  Hopefully this leads to one of those killer stretches where Sharp goes on goal scoring binge.