Blackhawks can't put together a full 60 minutes and lose a point to the Blues, 3-2 in a shootout.

Share All sharing options for: Recap : Wanted, One Gas Pedal

We are still waiting for the Blackhawks to play a complete game.  The trend of the early season is the Hawks coming out strong and putting it on cruise control for the second half of the game.  The Hawks didn't even get to the half way mark of the game before going through the motions on Thursday night.

The Blackhawks came out firing pucks at the net and broke the scoreless tie at 7:42 of the opening period.  Marian Hossa pounced on a Roman Polak turnover and found Brandon Pirri perched in the slot, who wasted no time sniping a wrist shot past Jaroslav Halak for his first NHL goal.  The turing point of the game came when Jonathan Toews took a slashing penalty at 10:09.  Michal Handzus lost the ensuing faceoff, and David Backes was allowed to go scot-free to the front of the net where he deflected a Jay Bouwmeester shot past Corey Crawford.

Hossa would put the Hawks back on top 17:22 into the 2nd period off of a breakaway.  Barret Jackman (more on this pud later) made a terrible turnover, during a Blues line change, and Niklas Hjalmarsson got the puck out to Hossa. Halak stood no chance against Hoss, who couldn't cash in on a partial breakaway earlier in the period.  But the lead was not meant to be, because St. Louis tied the game just 51 seconds later. Alexander Steen was given credit for a tipping in another Bouwmeester shot from the point, but it was actually Duncan Keith who deflected the puck into his own net.  Good thing Duncs isn't a Colombian soccer player.

The Blues out shot the Blackhawks 10 to 8 in a scoreless 3rd period that saw both goaltenders make some big saves.  Neither team could end the game in the extra 5 minutes so we had to endure another wonderful shootout.  T.J. Oshie was the only player to pot a shot in the skills competition.  Halak made saves on Patrick Kane, Jonathan Toews and Patrick Sharp. 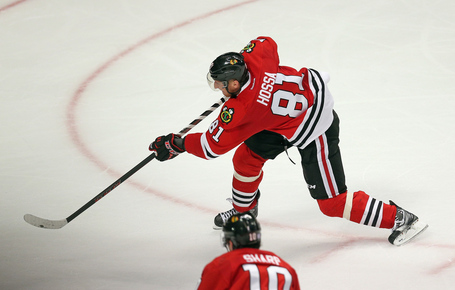 Marian Hossa appears to have gotten the rust off from missing all of training camp.  He made a great pass to set up the first Hawks goal and converted on half his 2nd period breakaway chances. He now has a goal in two straight games for the Hawks and seems to be healthy, which is very good news.

* Let's get my Barrett Jackman rant out of the way, shall we? Where is all the outrage by Blues fans about Jackman's hit? Patrick Kane is very lucky he wasn't carried out on a stretcher like Dan Boyle or Niklas Kronwall.  Jackman has been a career long turd and he showed it all game long. He started early by going after Andrew Shaw after the whistle and continued it with his reckless hit on Kane.  I hope he receives more than just the lousy two minute penalty.  The fact the Blues had a pregame ceremony to honor this sack of crap last year speaks volumes about their organization.  Roman Polak is another jackass, as he tried the same type of hit on Marcus Kruger in the 3rd period. Blues gonna Blues. I am scared to think what has to actually happen before the players around the league start to respect each other enough to stop with the dangerous hits from behind.
* Q was not a very happy camper at his post game presser.  He called the Blackhawks effort after the opening 12 minutes "awful."  There is a lot to improve upon.  It seems that once the Hawks grab a lead they figure the other team will bow down and kiss their Stanley Cup rings.  They have yet to play a complete game and have not scored a 3rd period goal since opening night versus Washington.  With all that being said, the Hawks still have earned 10 out of a possible 14 points which is scary considering how much better than can play.
* One thing the Hawks need to work on in practice is their passing, which has not been very good the last three games.  Turnovers have been an issue against the Blues, Hurricanes and Sabres.  They are averaging 25.3 turnovers the last three games, after averaging just 12.75 in the first four.  Sloppy play at both blue lines with come back to haunt you.
* Overall the Blackhawks did a pretty good job at the dot, winning 52% of the draws.  It figures the only short handed faceoff they lost ended up in the back of their net.  Jonathan Toews bounced back after a terrible night against Carolina to go 10 for 20.  Marcus Kruger had a nice night winning 15 of his 20 faceoffs.  He owned Patrick Berglund at the dot by going 5 for 7 against him.
* It was good to see Brandon Pirri get his first career NHL goal.  He showed some very good hockey smarts by getting to the slot and his wrist shot was an absolute snipe.  He got some shifts early with Brandon Saad and Andrew Shaw, scored a goal and then disappeared.  In fact, he didn't come back on the ice for nearly 10 minutes after he scored and only had 9 more shifts the rest of the game.  Q says he needs to find some offense, well you can start by playing a kid who scored on his 3rd shift of the game a little bit more.
* Andrew Shaw had himself a pretty good game when he wasn't being stupid.  He was very good early in the game helping the 3rd line get some great pressure going in the Blues zone.  He finished tied with Brent Seabrook for the team lead in hits with 6 and had 2 takeaways.  I could do without Shaw taking a selfish roughing penalty while the Hawks are the power play in the 3rd period of a tied game.  Those are the types of plays the prevent Shaw from completely winning me over.
* Not that I lose sleep over what happens in shootouts, but is there is reason Tazer is not going 5 hole any more? If it isn't broke....
Blackhawks Corsi Numbers
Blues Corsi Numbers