Recap : Coming Back To Earth

The Blackhawks double up the Maple Leafs on shots and take home the 3-1 victory.

Share All sharing options for: Recap : Coming Back To Earth

Tonight had the feel of 2013 in the United Center and it just wasn't because of the return of Dave Bolland.  The line combinations and the puck possession brought back many feelings from last season.  Hell, even Bryan Bickell awoke from the dead.  The Leafs have been getting beat in every statistical category this year expect goals.  The "fancy stats" crowd have been screaming the Leafs are not very good, and for at least one night, they are right.

The Blackhawks did not come out with the jump in their step we have been seeing of late.  Both teams felt their way through a rather boring opening period.  The Hawks out shot Toronto 9 to 3 in a period that saw both teams have to kill off two penalties apiece.

Bryan Bickell got the scoring started with his first goal of the season at 5:32 of the 2nd period.  Bicks let loose one of his patterned wrist shots from the top of the circle that Jonathan Bernier could not keep in his glove.  Bickell followed his shot, got the to loose puck and showed some great patience by getting Bernier down and taking advantage of the wide open net.  Andrew Shaw and Marcus Kruger assisted on the goal.

The Leafs would tie the game, with a power play goal, at 7:03.  The puck jumped right over the stick of Johnny Oduya, after being shot around the boards, and Joffroy Lupul found Nazem Kadri in front of the net for the game tying goal.

The Blackhawks would regain the lead at 10:28 with Michael Kostka's first career NHL goal.  Brandon Pirri made a great pass to find Kostka in the slot and his wrist shot had some help finding the net thanks to a screen from Brandon Bollig.  Pirri would give the Hawks and insurance goal, while on the power play, at 16:49.  Brandon Saad made a great pass from the left dot to Pirri, who was left alone in front of the net, for an easy tip in goal.  Nick Leddy picked up the secondary assists on both Kostka's and Pirri's goals.

The Hawks were unable to score that elusive 3rd period goal, but it wasn't because they didn't try.  They had an apparent 4th goal waived off due to goalie interference on Bryan Bickell.  Bernier had to make 11 saves in the period to keep his team in the game, but the Leafs could not get any closer.

* You can't help but feel good about the future of hockey in Chicago when you look at the 3 Stars of the Game: Leddy, Saad and Pirri.  These are the types of games I love to watch, when the secondary players step up and win a game for the Hawks.

* Speaking of secondary players, I like the way the 3rd line of Bickell, Kruger and Shaw played tonight.  This could be the combination that leads to some offensive output for Marcus Kruger.  With Bickell and Shaw getting to the front of the net, there could be a lot of room for Kruger to do some damage.

* It's safe to say that Michael Kostka has earned himself some more playing time.  Not only did he score the game winning goal but he had 4 shots on goal.  Q even put him out on the power play in the 1st period and he nearly scored.  My favorite Koskta play of the night was baiting Joffroy Lupul into to coincidental minors.  I will take the Kostka for Lupul trade off every day of the week.

* The Blackhawks passing seemed much better than it has in the last three games.  They only had 10 turnovers which was a vast improvement.

* A lot of people wanted to throw Johnny Oduya under the bus for the Leafs lone goal but the United Center Ice should have been credited with an assist on the play.  He was in the right place to make the play but the puck just bounced right over his stick at the last second.  There were a lot of bouncing pucks throughout the course of the game.

* For those of you who play SPG, I was never able to access the page to put up the post for today's game.  I will carry the points over to next week's game and the top 2 in points will both get shirts. 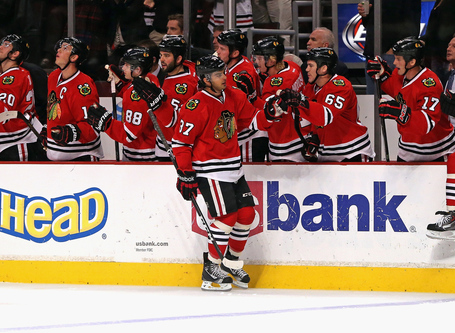 Brandon Pirri is showing signs that he belongs at the NHL level.  He has 3 points since being recalled and is playing a very solid game.  His passing ability is pretty special and it is going to be wasted centering Brandon Bollig and Joakim Nordstrom.  I would love to see him get some extended time on the 2nd line with players who can take more advantage of his play making skills.