The Blackhawks celebrated their 2013 season and kicked off the new season with a 6-4 win over the Caps.

Share All sharing options for: Recap : One Goal x 6 = Victory

From the red carpet entrance until the final horn, the Blackhawks were ready to celebrate 2013 one last time with their fans.  The whole gambit of hockey feelings were felt in the United Center. We had goosebumps when the banner went up, to frustration watching the Hawks give up three power play goals to finally the joy of victory.

It took all of 4:06 for the Blackhawks to take the lead and the legend of Brandon Bollig to begin.  Coach Q put his 4th line on the ice in final seconds of a power play and it paid off.  Marcus Kruger threw a shot at the net that Braden Holtby was able to kick out, but Bollig was in the right place at the right time and put the rebound in for his first career NHL regular season goal.  Niklas Hjalmarsson was credited with the secondary assist. The Capitals tied the game with a power play goal, at 10:42, by Alex Ovechkin who must have been inspired by actually seeing the the Stanley Cup in person for the first time. It took all of 16 seconds for Patrick Kane to give the Hawks the lead back.  He grabbed the puck out of mid air, between the dots, moved to his left and sniped a nasty wrist shot over Holtby's short side shoulder.  Jonathan Toews and Michal Rozsival assisted on Kane's goal.

The 2nd period was the beginning of the Mikhail Grabovski show.  He tied the game at 10:30 with a nice wrist shot, while on a 2 on 1, over the glove of Corey Crawford.  The play started when Joel Ward was able to lift the stick of Duncan Keith in the Hawks end and start the puck down the ice.  Brent Seabrook gave the Hawks the lead back with a power play goal at 14:32.  A juicy rebound from Holty found Seabs' stick and he was able to put the puck past him before falling down.  Marian Hossa and Brandon Saad assisted on the play.

It would be Grabovski scoring two more goals, both on the power play, at 0:59 and 5:16 of the 3rd period to give the Capitals a 4-3 lead.  Saad tied the game up at with a nifty little backhand shot a 7:55.  Saad dropped the puck off for Michael Handzus at the blue line and headed straight for the net and got in between both Washington defensemen.  Handzus made a great lead pass that found Saad's stick for the game tying goal.  The birthday boy Johnny Oduya would score the game winning goal at 13:53, after Saad made a nice play keeping the puck in the zone and getting it across to Oduya.  Johnny ripped a slap shot from the top of the right circle that Holtby completely misplayed.  Not sure if he thought the shot was going wide or not, but the puck hit his glove and went in behind him.  Hjalmarsson picked up his second assist of the game on the goal as well.  The Blachawks had to kill off 1:26 of a 5 on 3 in the closing minutes of the game, but rose the occasion when it was needed most. Marian Hossa iced the game when was pulled down on an empty net breakaway and, by rule, was given credit for the goal.

Overall it was a sloppy game on both ends, which is to be expected on opening night.  The Hawks came out with the two points which was the main objective.  The boys in red will get a couple days off before the Tampa Bay Lightning come to down on Saturday night.

* The banner ceremony was fantastic last night.  The Hawks marketing department does a fantastic job even though I would have rather gotten a mini banner, like we did in 2011, than a blinking bracelet but, oh well.  The ceremony was very gracious and humble.  The retrospectives and the use of the ice as a huge screen was so cool.  Hopefully that wasn't the last one of those I get to go to.

* I am not ready to put Brandon Bollig into the Hall of Fame just yet, but I will give him a ton of credit for making some strides in his game.  If he keeps getting to the front of the net, like he did last night, he will score a few more goals this year.  Just stay out of the box!

* I am not going to panic over the penalty kill after just one game.  Washington has a better power play than any team the Blackhawks saw last year.  I just hope they took some notes on what a big boy power play looks like.  But, would it kill you to win a defensive zone draw when you are shorthanded?

* How did the Maple Leafs let Mikhail Grabovski walk away? I said his deal would be the steal of the summer.  If he produces, and he should on this team, he will set himself up rather nicely for some big dollars in the offseason.

* My man crush on Brandon Saad did not dissipated over the summer and seeing him get off to a fast start was great.  What an embarrassment of riches we have that a player of his talent is on our 3rd line! He will take advantage of not playing against opponent's top six for most of the year.

* Corey Crawford earned his money during the late stages of the game.  He made some huge saves during the Capital's 5 on 3.  Can't really hang any of the goals on him when three were on the power play and one came on a 2 on 1.

*Speaking of earning their paycheck, Niklas Hjalmarrson was fantastic! The second pairing of Hjammer and Johnny Oduya was by far the best duo on the ice.  They finished the night with a combined 4 points, 7 blocked shots and were a collective +8.  Wasn't a surprise to see them on the ice during the 5 on 3 instead of Duncan Keith and Brent Seabrook.

* Mike Green is a terrible defenseman! He has no interest in initiating contact or getting in front of a shot, you know, the things defensemen are supposed to do! But, if he keeps racking up the points he will be a Norris finalist because points are what make you the best defensman in today's NHL.

* Not the greatest debut from Joakim Nordstrom.  He did make a nice play that kept the puck in the zone before Bollig's goal but he looked a bit timid and over matched for much of the night.  He didn't do much on the penalty kill that impressed me but that was, more than likely, because of the Caps' personnel than anything else. The delay of game penalty was a dumb rookie mistake that could have killed the Hawks.  I wouldn't mind seeing Ben Smith out there on Saturday night. 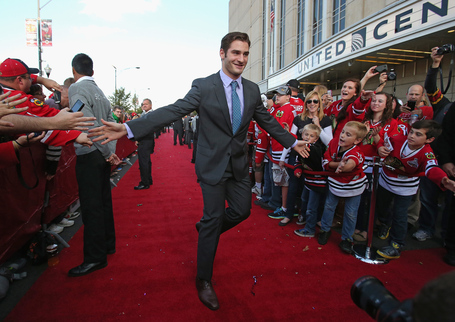 Not a bad start for the Manchild, with a goal and two assists! I am sure Brandon Saad will have his ups and downs during an 82 game season but I am so excited about this kid.

Note: I am having trouble with the Macros I used to get Corsi numbers to pull data from this year's games so no Corsi today. I will hopefully have this smoothed out by Saturday's game.