The Blackhawks endure another lackluster 3rd period, but get 2 points via the shootout.

One of these days the Blackhawks are going to surprise us with a 3rd period goal and a 3 goal lead.  They had their chances to do both last night but instead blew another 2 goal lead and had to earn the extra point with a shootout win.  Now is not the time to start getting crazy over these 3rd period let downs.  I would much rather have this be a reoccurring issue in October than April or May.   Plus, 14 out of a possible 18 points is nothing to be upset over.  Sure it could be better, and their are improvements to be made, but it isn't if the Hawks are playing horrible hockey.

The first 20 minutes went by pretty quickly with both teams playing a fast paced game.  The majority of the period was down in the Panthers end as the Hawks attempted 29 shots.  12 off them found the net but Florida defenders came up huge with 14 blocked shots.  The Panthers only had 6 shots on goal but a couple of really good chances off of turnovers due the Blackhawks defensemen dealing with the poor ice conditions.  The Hawks got a late power play but could only come up with one shot that was kept out by Tim Thomas.

Jonathan Toews would break the scoreless tie at 5:18 of the 2nd period, with a power play goal.  Patrick Kane started the play by making a cross ice pass to Duncan Keith who quickly passed the puck towards the net.  Toews was able to get past the defense and use his back hand to deflect the puck into the net for his 3rd goal of the year.

A few moments later Johnathan Huberdeau was awarded a penalty shot after being tripped up by Michal Handzus, but Corey Crawford was able to stop the reigning Calder Trophy winner.  Bryan Bickell doubled the Hawks lead at 16:49 by, once again, following his shot.  He took a shot from the slot but it was blocked and he followed the puck to the left faceoff circle where he ripped a wrist shot past Thomas. Andrew Shaw and Niklas Hjalmarsson assisted on Bickell's second goal in as many games.

The dreaded 3rd period was more the same for the Blackhawks as the Panthers were able to tie up the game with two quick goals midway through the frame.  Thomas Fleischmann and Dmitry Kuliov scored 2:47 apart from each other to add to the 3rd period woes. The first goal was created by some lazy defense from the top line and Brent Seabrook unable to come up with the puck along the boards.  The second goal was aided by Brian Campbell getting away with a trip on Brandon Pirri and Keith making an egregious turnover.  Steve Konroyd was quick to defend Duncs by saying that the puck was tipped but I am not letting him off the hook so easily.  Why was he even making a pass to the center of the ice in that situation?  The safer play would have been throwing the puck up on the glass and just getting it out of the zone.  Tim Thomas had to leave the game with less than 3 minutes to go in regulation.  He appeared to have aggravated his groin injury making a save on a shot by Andrew Shaw.

The Blackhawks had two chances to end the game in overtime.  Brandon Saad and Patrick Kane got in behind the Panthers defense but both missed the net.  Jonathan Toews started the shootout by scoring through Jacob Markstrom's five hole.  Patrick Sharp iced the game with his second shootout goal in three attempts this year.

* For whatever reasons, the Blackhawks offense takes a siesta in the final period this year.  It isn't that they just  aren't scoring, but they stop shooting too.  Going into Tuesday's game the Hawks had 102 shots in the 1st period, 98 on the 2nd and just 66 in the 3rd period.  Last night followed this trend as well with the Hawks getting 22 shots in the opening 40 minutes but just 6 in the 3rd period.  With the offense struggling in the 3rd period, wouldn't make sense to put Brandon Pirri, a play making center, up with the two Patricks? Even if it is just for a few shifts in the 3rd, it could provide the spark the offense is looking for.

* Ben Smith was very noticeable again last night.  He had four blocked shots including one that led to a 2 on 1 where Smith channeled his inner Stalberg and hit the post.  With Joakim Nordstrom back in Rockford we should be seeing Smith every night, which is what should happened from the very start.

* Andrew Shaw has been putting together a string of nice games, when he isn't ending power plays by taking selfish penalties behind the play.  He led the team with 5 hits and finished the night with a +4 Corsi.  I am surprised he hasn't scored yet because he always seems to be around the net.  As long as he stays somewhat smart, his trolling skills could make people forget all about Dave Bolland.

* Not going to lie, I was miffed when I saw Sheldon Brookbank in the lineup instead of Michael Kostka.  But, I will give credit where credit is due by saying Brookbank played a solid game.  He was only credited with one blocked shot but he broke up two separate Florida 2 on 1's.

* I don't know how a giveaway is officially scored during a game, but how did the Hawks get credited with only 4 for the night? 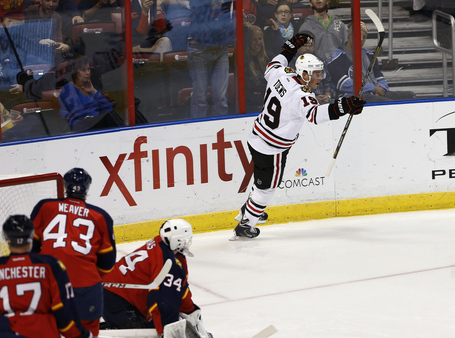 Jonathan Toews broke out of his scoring slump with his power play goal in the 2nd period.  He also scored on his shootout attempt by going back to his patented 5 hole shot.  Toews was also a beast at the dot winning 15 of his 21 faceoffs. He is still taking too many penalties for my liking, as he picked up his 5th minor penalty of the season.  Only Brandon Bollig has more penalty minutes than the captain right now.