Recap : Just One Of Those Nights

Blackhawks lose in OT, but are awarded a gift point after a crazy night.

Share All sharing options for: Recap : Just One Of Those Nights

Good news is the Blackhawks scored in the 3rd period.  The bad news is they lost in overtime and were very lucky to get a point after the sloppiest game they have played this season.  There was more bad than good tonight, but you can't complain about taking 3 out of 4 points on the road.

The Lightning got the scoring started 6:28 into the opening period with a Matt Carle power play goal.  With Michal Rozsival in the box for being a dirty hooker, Carle blasted a slap shot from the point that Nikolai Khabibulin flat out missed. He had a clear look at the puck and it wasn't deflected, but he completely misjudged it.  The Hawks went on to dominate the rest of the 1st period, but couldn't get the puck past Ben Bishop.

The 2nd period did not get off to the greatest of starts for the Blackhawks, as their power play unit gave up a 2 on 1 shorthanded goal to Nate Thompson at the 1:24 mark.  Bryan Bickell got a "greasy goal" at 9:00 of the 2nd, his 3rd goal in as many games.  Brent Seabrook took a shot from the blue line that got deflect through the traffic in front of the net.  Bickell was in the right place and the right time to put the puck into the exposed net.  Marcus Kruger was given the primary assist on the play.  Marian Hossa tied the game just 96 seconds later after deflected a Patrick Sharp slap shot past Bishop.  Johnathan Toews got the secondary assist on the goal that had to be reviewed in Toronto before it was officially put on the board.

Steven Stamkos gave the Bolts the lead back at 17:21 with another shot Khabiblun should have come up with after taking a bad angle on the play.  Patrick Kane took advantage of Eric Brewer whiffing on a shot at the blue line to tie the game with just 1:07 left in the period.  Kane beat both Tampa defensemen and ripped the puck through Bishop's five hole for his 5th tally on the year.

If you thought the 2nd period was crazy, the 3rd period was down right "Abby something."  The Hawks would break the tie with a power play goal at 1:33.  Kane got off a wrist shot from the left faceoff circle that was deflected into the net by Andrew Shaw, who was planted fight in front. Duncan Keith picked up his 6th assist of the year on the play as well.  Victor Hedman (maybe the only Victor in hockey that spells his name with a c) broke the tie at 11:03 on an iffy goal.  Steven Stamkos obviously interfered with Khabibulin, but the refs ruled otherwise.  Replays showed Stamkos had some help by a cross check from Michal Rozsival.

Stamkos would score on the power play to give his team the lead at 17:31.  Jonathan Toews lost the defensive zone draw and Stamkos blasted as shot from the point. Johnny Oduya tried to play goaltender in front of Khabibulin but did more harm that good as the puck changed direction off his stick.  The Hawks would receive an early Christmas gift. at 18:11, when Matt Carle passed the puck back to Radko Gudas in what seemed to be a harmless play.  Instead Gudas must not have expected the pass because it went right between his legs and past a daydreaming Ben Bishop.  Toews was given credit for the unassisted goal.

Gudas would get redemption just 76 seconds into overtime with the secondary assist on the game winning goal.  The defenseman got off a slap shot from the point that wasn't handled cleanly by Khabibulin.  Stamkos was able to dig out the rebound to Martin St. Louis who put the puck up and over the sprawled out Hawks goalie.  The Blackhawks gave the Lightning gift points in Chicago and last night the Bolts returned one of the points back.

* Today's observations could be called "bad, old hockey players" as the gray beards in white had themselves quite the crappy night.  We will start with Nikolai Khabibulin who looked exactly like a 40 year old, backup goaltender should look like.  We have been spoiled in Chicago the last few seasons with our backups being just as good, and sometimes better than, the starter.  That is not the case this season.  If Khabibulin can go .500 in his 15-20 starts this year then he will be fine.  Let's all just hope Corey Crawford stays healthy this season.

* Michal Rozsival did not look good again.  Can we get the Rozsival from the playoffs back because so far this year's version has played like garbage?  He took two bad penalties, one that lead to the Lightning's first goal.  He also helped Steven Stamkos run interference on Tampa's 4th goal by pushing him into the Khabibulin. I think the solution to his problems is actually more playing time, not less of it.  He needs to get himself into a groove instead of playing once every six days.

* Michal Handzus is the third member of our old, bad hockey trio.  I know Handzus is not the fleetest of foot, but the Lightning made him look as if his breezers were full of cement.  Eddie Olczyk called him a "step slow" during the game.  A step slow would be a major upgrade.  There is no excuse for taking that face off violation penalty with less than 3 minutes to go in a tied game.  I could expect that out of a rookie like Brandon Pirri but not a 17 year veteran.
* The ice time chart is a bit out of skew, but that can be expected in a crazy game.  Bryan Bickell only got 9:14 of TOI with only 4 shifts in the third.  Not sure how you let a player who has three goals in three games sit for the majority of the 3rd, but that's Q.
*The special teams were not very special last night.  Sure the Hawks got a power play goal but they went 1 for 6 and gave up a shorthanded goal and were lucky it was only one.  Tampa's shortie was a text book example of what not to do on a power play.  The Hawks had 4 of their 5 players at or below the goal line.  Once the puck came out they were toast.  The penalty kill gave up another 2 goals and proved how crucial defensive zone draws are when you have a man in the penalty box.
* The top defensive pairing of Duncan Keith and Brent Seabrook had a nice rebound night.  The duo finished a combined +7, which is impressive considering the team gave up six goals.  Both players had an assist on the night and Keith finished with 5 shots on goal and 2 takeaways.
*Once again, the Blackhawks had a huge advantage in possession as the Corsi numbers show below.  This is why I am not too worried about where the Hawks are headed as the season moves along.  Once they shore up the penalty kill and their 3rd period play this team can really do some damage.
Player of the Game 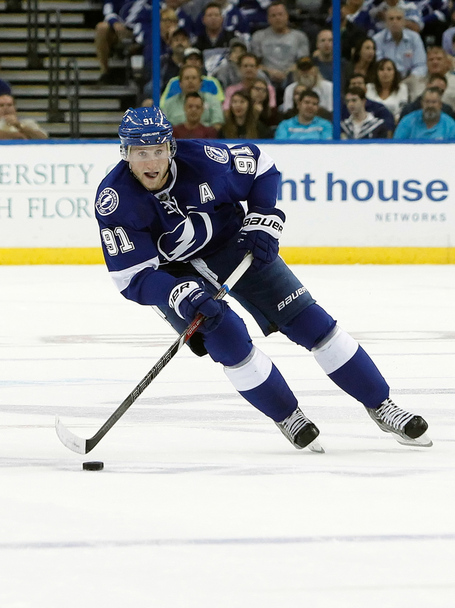 As good as Patrick Kane was last night, Steven Stamkos was a monster.  Two goals, two assists and just a force all over the ice.  His first goal was an absolute snipe that makes goalies wake up in the middle of the night with the shakes.