The Blackhawks lay an egg in a 5-3 loss to the Minnesota.

No way to sugar coat what we saw last night; the Blackhawks stunk out the joint.  They were able to put together flashes of good offensive play, but Niklas Backstrom was up to the challege.  The sloppy and lazy play in their own zone spelled certain doom.

The Blackhawks got an early power play chance but they reverted back to full on clown shoes and could barely even get the puck into the zone let alone to the net.  The WIld had no problem converting on their first power play chance, as it took all of 5 seconds for Zach Parise to score is 6th goal of the year at 12:39.

Kyle Brodziak doubled Minnesota's lead by deflecting the puck past a very deep Corey Crawford at 1:07 of the 2nd period.  The Hawks looked like they got on the board mid way through the period after the puck was knocked into the net during a scrum in front of the net.  After a long video review, in Toronto, that lasted longer than most celebrity marriages, it was ruled that Andrew Shaw deflected the puck with a high stick. To the Hawks credit, they continued to apply some pressure on the Wild after the deflating call.  Bryan Bickell scored for the fourth straight game at 13:46 to officially get the Hawks on the board.  Nick Leddy made a great pass from the bottom of the circle to Bickell in front of the net.  Bickell had patience with the puck and didn't shoot until Backstrom was down.  Michal Rozsival picked up the secondary assist.  Jason Pominville got the goal back for the Wild less than four minutes later, when he was able to rip an uncontested shot from the slot.

Pominville would score again 9:18 into the 3rd period cashing in a bad Leddy turnover, who was trying to pass to Brad Mills in the center of the ice.  The Hawks finally took advantage of a power play with some nice give and go passing from Jonathan Toews and Patrick Kane.  Leddy picked up his second assist of the night on Kaner's 6th goal of the year. The Wild would get their 5th goal of the night from Justin Fontaine, after a missed check by Michal Rozsival led to a Minnesota 3 on 1.  Marcus Kruger cleaned up a rebound from a Brandon Bollig shot for his first goal of the season with just 30 seconds left in the game.

Yes, the effort was piss poor and unacceptable but better in October than say April or May.  The effort better show up Monday night in St. Paul when these two teams meet again.

* I am getting really tired of people telling me how much Corey Crawford sucks whenever he has a subpar game.  You don't hear much out of these mouth breathers when he is excellent, which has been for the majority of the season so far.  Last night was only the 3rd time this year Crow has given up 3 or more goals in a game.  Every goaltender is going to have a bad game from time to time, it happens.  And when he does happen to Corey Crawford there is no need to remind me how much his new contract is worth.

* The Blackhawks defense let down their goaltender for the second straight game.  They were terrible in Tampa Bay and awful again last night.  Brent Seabrook looked as if he had zero interest in playing hockey.  I stated in Friday's recap the more playing would serve Michal Rozsival well.  I am now retracting that statement.

* It wasn't only the defenseman who need to share the blame, the forwards are not playing good defense either.  They are starting to break the zone too early which killed them in the two seasons after the 2010 Cup.  They fixed that problem last season and we all know how that worked out for them.  The forwards need to be more responsible in their own end and help out their defensemen.  We are seeing way too many turnovers due to defensmen being left on an island within their own zone.

* The Hawks out hit the Wild 34 to 15 and lost by two goals.  Kind of defeats the old "Hawks need to hit more to win" arguement, doesn't it?

* The Hawks are going to need more out of their special teams.  How many goals is the penalty kill going to give up immediately after losing a defensive zone draw? The power play needs to do better than 1 for 7 against one of the worst penalty killing teams in the league.  That first power play made me want to poke my eyeballs out.

* The bottom six forwards were pretty good last night.  It seemed any time the Hawks sustained any type of pressure it came from the 3rd and 4th lines.  I liked what I saw out of Jeremy Morin, he was very noticable for most of the night.  As much as I like Ben Smith, Morin was better for at least one game.
* I do like the new Wild uniforms, they are much better than the Moutain Dew jerseys they used to wear.
Player of the Game 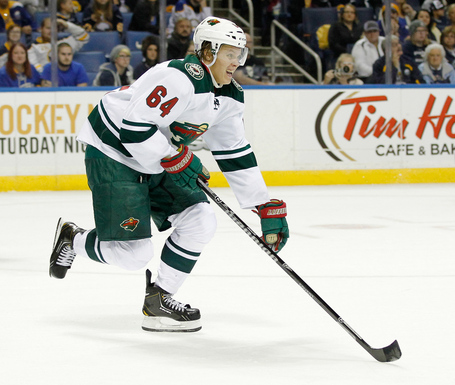 Niklas Backstrom was good and Jason Pominville scored twice but I thought Mikael Granlund was the best player on the ice.  He set up both of Pominville's goals with great passes.  He showed that if you give this kid any room on the ice he can kill you.