Captain Serious To The Rescue

The Blackhawks overcome a horrible outing from Nikolai Khabibulin for a 6-5 come from behind win over the Ottawa Senators.

Share All sharing options for: Captain Serious To The Rescue

Last night was the type of game, about half way through, where you stop worrying about stats and shift charts and just still back and enjoy.  The Blackhawks win resembled a game that was played on an XBox more than one played on the ice.  These are the games that are a lot more fun to watch when your team comes out on the winning side and thankfully the Blackhawks did just that.

The first period made those who love defensive hockey cringe because there was not much of in the opening frame.  Andrew Shaw was given credit for a power play goal 6:54 into the game after a slap shot from Patrick Sharp deflected off of his leg.  Duncan Keith got his eighth assist on Shaw's second goal of the season.  Milan Michalek tied the game with just a minute left in the period, after jumping on a loose puck and ripping it past Nikolai Khabibulin's glove.  Both goaltenders were busy and looked sharp in the first period.  The two teams combined for 27 shots on goal, 12 by the Blackhawks.

The good goaltending ended when the horn sounded at the end of the opening 20 minutes.  The Senators took the lead by cashing in on the last few seconds of a power play.  Clarke MacArthur bull rushed the net and Kyle Turris was able to tip in the puck after Khabibulin could not gain control of it.  All former Senator Marian Hossa needed was 50 seconds to tie the game.  The Hawks got a 2 on 1 thanks to Erik Karlsson forgetting to play defense in the neutral zone.  Jonathan Toews centered the puck to a wide open Hossa who buried the puck five hole.  Niklas Hjalmarsson picked up his seventh assist of the year on Hossa's 100th goal in Chicago.

The Senators would chase Khabibulin from the game after Joe Corvo and Mika Zibanejad (gesundheit!) scored 55 seconds apart.  Shortly after Corey Crawford entered the game, the captain decided to put his team on his back.  A Patrick Sharp shot hopped over the top of the net and Toews was there to wrap the puck around for easy goal while Craig Anderson was sprawled on the ice.  Hossa was credited with the secondary assist on the play.

Johnny Oduya helped Toews tie the game just 1:20 into the third period. He used his speed to gain the zone and made a great lead pass towards to the net where Tazer's stick was waiting.  The captain would register is third career regular season hat trick at 9:13 to give the Hawks a 5-4 lead.  Toews went hard to the net to put a Brent Seabrook rebound back into the net.  Hossa, once again, was credited with the secondary assist.  Andrew Shaw gave the Hawks some well needed insurance at 14:10. Jeremy Morin won a puck battle at the boards and got off a quick wrist shot.  Shaw crashed the net for the rebound and picked up his second goal of the game.  Zack Smith scored on an unassisted wrist shot just 13 seconds later to cut the lead to 6-5.  The Blackhawks would hang on for the final five and half minutes to pick up their second win in as many nights.

* Nikolai Khabibulin was bad, real bad.  Those of you who think this was last we are going to see of him, you are going to be disappointed.  There was a lot of talk about Antti Raanta getting called up, even on the Comcast post game show.  I don't think we are at that point yet.  Raanta has been really good in Rockford, but he has just seven professional starts in North America.  If we get back from the circus trip in November and Khabby is still a hot mess then we can look into making the change.  It is still way too early to be pulling the trigger on calling up Raanta.

* Not all of the blame can be laid at the feet of Khabibulin.  After all, the defense in front of a goaltender can make him look much better or much worse in this case, than they really are.  The Hawks gave up 22 shots in just over 31 minutes.  That is not good, especially when your backup net minder is between the pipes.  Patrick Sharp did not do anything to prevent Milan Michalek from getting off his shot.  Brent Seabrook was over 80 feet away from the net when Mika Zibanejad scored Ottawa's fourth goal.  These are breakdowns that cannot happen.

* Six games in a row with a power play goal.  I'm going to let that one sink in for a second.....  The Blackhawks looked like they have finally learned to stop standing still and fire pucks at the net.  I was going to write a couple days ago that the Hawks would never score a goal five seconds into a power play because they would have to make 13 passes before getting a shot off.  Good thing I never put that in writing because they scored in just nine seconds last night.  They only had one other power play and applied some good pressure despite only getting one shot on the net.  A deadly power play is a great weapon to have, plus it will give your stars more room on the ice because teams will be afraid to go to the box against the Hawks. I am not saying the Blackhawks power play is at an elite level just yet, but they are heading in the right direction.

* After seeing Erik Karlsson for the first time in person I think it is safe to say he is overrated.  He is a great offensive talent with amazing skating skills but he is not much of a defenseman.  He pretty much just stands around waiting for the puck to start out of his own zone so he can join the rush.  I hope he buys Marc Methot a lot of dinners for doing all the dirty work when they are on the ice together.  Watching a player like Karlsson win the Norris makes me think the NHL should have two awards for defensemen; one that honors offensive output and one for defensemen who actually play defense.

* There has been some talk about Brandon Pirri in the defensive zone.  There is no doubt he needs some improvement in this department but he is trying.  Once he figures out where he needs to be on the ice, he should be just fine as long as the desire to play defense remains. 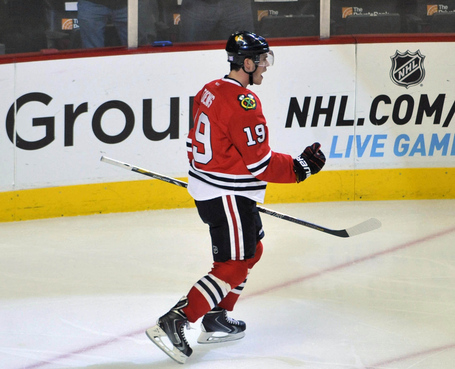 No doubt about this one.  It was great see the captain follow up his worst game of the year with his best one.  Three goals and an assist is an amazing effort and it makes his 39% at the dot much easier to swallow.  Tuesday night was great, but nothing will top the night when Toews had to score his third goal twice on hard hat night against the Penguins a few years back. Those poor ice crew girls......