Recap : The Spirit Of St. Louis

Blackhawks dominate play for all of two minutes and lose, in a shootout, to the Lightning.

Share All sharing options for: Recap : The Spirit Of St. Louis

Anybody who suffers from sleep deprivation was a fan of most of this game.  The Tampa Bay Lightning, a very inexperienced team, came into Untied Center with the game plan to do everything possible to slow down the Blackhawks offense. It worked for the first 12 minutes of the opening period as the Bolts held the Hawks to just 3 shots during that time frame.  The problem with that game plan was that they totally forgot to play offense, as they went the entire 1st period without a shot on goal.  According to Comcast Sportsnet, it was the first time the Hawks held a team without a shot on goal in a period since 1946.

Patrick Kane ended the scoreless tie just 59 seconds into the 2nd period.  Kane cashed in on a sequence that saw both Niklas Hjalmarsson and Bryan Bickell try stuff shots on Ben Bishop while Sami Salo and Victor Hedman stood by and watched.  Kaner stuffed the second rebound given up by Bishop into the net for his 2nd goal of the year.  Brandon Saad picked up a fluke goal on the power play at 9:14 to give the Hawks a 2-0 lead.  Nick Leddy dumped the puck around the boards, which caused Bishop leave the net, but the puck took a funny bounce to the front of the net where Saad tipped it into the open net for his 2nd goal the year as well.  Corey Crawford was given credit for the secondary assist.

Steven Stamkos won an offensive zone draw back to Matt Carle who let go a shot from the point.  Martin St. Louis was able to beat Duncan Keith to the rebound and put a back hand shot past Crawford at 10:08 of the 3rd period.  The Lightning took advantage of their only power play game of the night to tie the game at 11:51.  St. Louis tried to pass the puck towards the net but it was blocked by Keith. Unfortunately, the puck bounced right to the stick of Teddy Purcell who fired it past Crawford.

After a scoreless 5 minute overtime session, in which both teams mustered two shots on goal apiece, the game moved to the fantastic shootout.  Valterri Filipula was the only player to light the lamp in the shootout.  Ben Bishop stopped all three shots by the Hawks from Jonathan Toews, Patrick Kane and Marian Hossa.

* Michael Kostka made his Hawks debut tonight.  I didn't really notice much out of him but that is not a bad thing.  I treat NHL defensemen like NFL offensive linemen; you normally only stick out when you do something either really good or extremely bad so not being noticed means you are doing your job.  Kosta did finish the night with 16:03 of ice time, which included some time on the power play and a shift with Duncan Keith during the overtime period.

* Tampa's first goal is why it is never a good idea for your 4th line to ice the puck.  Jon Cooper was able to put the Stamkos/St. Louis line out there against Brandon Bollig, Marcus Kruger and Ben Smith. Yeah who didn't see that ending badly?

* Corey Crawford's save % leaves much to be desired after two games, but it's just two games.

* The best line of the night was the 3rd line, by far.  They were the first line to establish some pressure in the second half of the opening period.  They came up with a few scoring chances but could not come through.  Brandon Saad, Andrew Shaw and Ben Smith combined for 8 shots and 6 takeaways. Shaw even won 6 of his 11 draws.  They were a combine +24 Corsi on the night too.

* There is no doubt that Niklas Hjalmarsson is early his new contract.  He continues to be the best Hawks defenseman on the ice.  He picked up his 3rd assist of the year tonight to go along with 2 shots on goal.  I love the Hjammer seems to be getting more involved with offense. He also added two more blocked shots to his season totals.

* Tonight's game reminded me off the 2012 playoff series against the Coyotes.  The Hawks dominated the play, but a couple of bad bounces and a goalie playing out of his skull did them in.  All you have to do is look at the Corsi numbers below to come to the conclusion that the Blackhawks pissed away a point.  Hopefully one point won't make or break the Hawks at the end of the year but a few more games like this could add up. 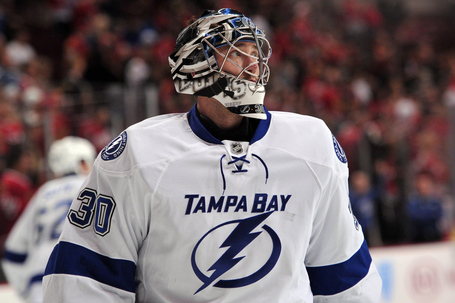 No doubt Ben Bishop stole two points for the Lighting.  They had no business being in this game but Bishop stood tall and gave the Bolts a chance to tie the game and win it in a shootout.  A few more games like this and Tampa fans will forget that Steve Yzerman gave up Cory Conacher to get Bishop.