The Blackhawks score three goals in the 3rd period to power past the Edmonton Oilers 5-4.

For whatever reason, the Edmonton Oilers give the Blackhawks fits.  There is no argument that the Hawks are the superior team but the Oilers always play their best against them. Sunday night was another great example of how the Hawks' depth can wear down teams.  The Blackhawks didn't need their red hot top line to do all the damage.  They were able to rely on some of their role players to lead them to another two points.

The first period was practically unwatchable.  There was no doubt that both of these teams were playing the second half of back to back games.  The Oilers would get the first four shots of the game, but by the end of the period the Hawks would hold an 11-6 edge in shots.  The only thing that saved this period from being a complete waste was a Brandon Saad goal at 18:23. Brandon Pirri was looking to find Patrick Kane from below the goal line but the pass was deflected to the center of the ice.  Saad, who was skating to the front of the net, pounded the puck past Devan Dubnyk.  Brent Seabrook picked up the secodary assist on Saad's fourth goal of the year.

Ryan Nugent-Hopkins would tie up the game just 53 seconds into the 2nd period.  Both Niklas Hjalmarsson and Marcus Kruger went to play David Perron which left Nugent-Hopkins wide open who ripped a wrister over Corey Crawford's short side shoulder.  Sam Gagner would be awarded a penalty shot a few moments later, after being pulled down by Seabrook, but could not convert.  Nail Yakupov would give the Oilers a 2-1 lead with a power play goal at 8:55 by drilling a one timer past Crawford from the top of the right circle.  The Blackhawks would get many chances to tie the game during the second half of the period and finally came through at the 17:18 mark.  Brandon Saad made a great centering pass between two Edmonton defenders and found the stick of Andrew Shaw who beat Dubnyk glove side for his fourth goal of the year.

The Blackhawks dominated the puck possession in the opening minutes of the 3rd period keeping the puck in the Edmonton for large chunks of time.  They were finally able to take advantage of one of many juicy rebounds given up by Devan Dubnyk five and a half minutes into the period.  Bryan Bickell was in the right place at the right time and was able to put back a rebound from a Michal Rozsival shot.  Patrick Kane picked up an assist on Bickell's fifth goal.  The lead wouldn't last long as David Perron tied the game with a power play goal, off a deflection, at 7:58.  The Hawks would retake the lead a 11:44 when Marcus Kruger slipped a shot past Dubnyk, after a nice pass from Ben Smith, for his second goal of the year. Duncan Keith would score his first goal of the season with a 45 foot slap shot, while on the power play, at 13:29.  I can't really blame Dubnyk for that one because when was the last time a shot from Keith actually made it to the net?  It turned out to be a pretty important goal as the Jordan Eberle would score a shorthanded goal to draw the Oilers to within one at 18:32.

* Johnny Oduya had one of his better games of the season.  He was very active in his own zone all night long. He was given credit for one takeaway and a blocked shot.  He contributed on the offensive end as well.  He picked up an assist on the Marcus Kruger goal to go along with his three shots.  Maybe his best play of the night was goading Nail Yakupov into a stupid roughing penalty with less than three minutes to go.

* Marcus Kruger had an all around solid game.  Besides potting the only shot he took all night, he won 64% of his faceoffs.  The biggest win of the night game on the final shift of the game.  He won the draw and was able to keep the puck along the boards, with help from Brandon Bollig, which prevented the Oilers from be able to pull their goalie for an extra attacker.

* Eight shifts for Sheldon Brookbank. Why?

* It was a shame the Michal Rozsival's night had to end by taking a puck to the mouth while sitting on the bench.  He was having his best game of the season and looked to be finally getting over his slow start.  Not only did he have the primary assist on Bryan Bickell's goal but he also save a goal, in the 2nd period, when he cleared the puck from the crease after Corey Crawford lost sight of it.  Apparently Jeremy Morin was overhead asking if there are two r's in David Perron while writing a check in the pressbox.

* The Blackhawks won 50 of the 73 faceoffs last night.  That is an incredible stat. Johanthan Toews led the way winning 75% of his draws.  The worst Hawk at the dot was Brandon Pirri who still won 7 of his 12 faceoffs.

* The ice time is still a bit too top heavy for my liking.  Patrick Kane, Jonathan Toews, and Patrick Sharp all played over 21 minutes while Marian Hossa was just under 20.  Meanwhile, Bryan Bickell only played 10:32.  I think I guy you invested $16 million in can play more than Brandon Bollig. 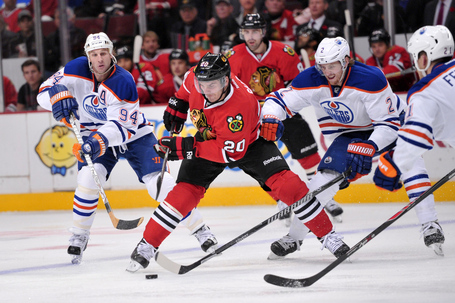 Brandon Saad is going to have to make a trip to Burlington Coat Factory to get himself a nice heavy parka for his trip to Russia in February.  This kid's playmaking abilities are incredible and his play without the puck makes me tingly.  It doesn't matter what line you put him on he succeeds.