Blackhawks Shoot Their Way To Their 4th Straight Win

The Blackhawks beat the Coyotes 5-4 in a shootout.

Share All sharing options for: Blackhawks Shoot Their Way To Their 4th Straight Win

It was very fitting that Thursday night's game ended in a shootout because the game was a shootout all night long.  The Blackhawks used Phoenix goaltender Mike Smith for target practice.  They attempted 79 shots and got a season high 52 on goal.  In the end, the Blackhawks earned two points and found away to get Dale Tallon to send back Kris Versteeg and pay half his salary.  A good night indeed!

The Blackhawks wasted little time getting the puck past Mike Smith, as they scored the game's first goal just 2:37 into the game.  Nick Leddy used his wheels to quickly gain the zone and passed the puck to Patrick Kane who quickly fired a shot from the right circle.  The puck was blocked but was pounced on by Brandon Saad who got his second chance effort up and over Smith for his fifth goal of the season.  Coyotes' coach Dave Tippett tried to say Smith was interfered with by Brandon Pirri but the officials would have nothing of it.  The 3rd line drew a penalty shortly after a dominating shift by the top line and the Hawks would double their lead at 6:22.  Patrick Sharp scored his fifth of the season with a blast from the point that was aided from a screen in front by Andrew Shaw.  Jonathan Toews and Patrick Kane picked up assists on the play.

The building was rocking but the Hawks momentum would quickly disappear.  Michael Stone was credited with his fourth goal of the year, at 7:03, when his wrist shot was redirected by Pirri past Corey Crawford.  The Coyotes would tie the game at 14:04 with a power play goal.  Keith Yandle's shot went wide of the net but the puck bounced off the end boards right to the stick of Shane Doan, who scored an uncontested goal, his sixth power play tally of the season. Ten seconds after the Doan goal Brandon Bollig was sent off for holding but couldn't keep his mouth shut and got an extra two minutes for unsportsmanlike conduct.  Thankfully the Hawks miserable penalty kill was able to kill off the four minutes and only gave up one shot on goal.  The important kill had more to do with the Coyotes power play stinking out the joint than the Hawks PK being good but I will gladly take it.

Marian Hossa kept the Blackhawks' tradition of scoring goals right after having a baby at 5:05 of the 2nd period.  Hoss took a shot from the left circle that looked like it hit Smith in the mask.  Hossa would follow his own shot and went right by Yandle to put back the rebound for his ninth goal.  The top defensive pairing of Brent Seabrook and Duncan Keith assisted on the goal.  Lauri Korpikoski would tie the game a 14:55 on a designed play following an offensive zone faceoff win by Martin Hanzel.  Korpikoski was allowed to sneak in between Johnny Oduya and Niklas Hjalmarsson and snuck a quick wrist shot past Crawford.  Sheldon Brookbank iced the puck about two minutes later that led to a sequence in which the puck ended up in the back of the Hawks net.  Michael Stone scored his second goal of the night by ripping a wrist shot from the slot past Crawford.

Brandon Pirri would tip notch a tip in goal for the second time in the game, this time in the correct net, exactly three minutes into the final period. Nick Leddy kept the puck in the zone as a Coyotes' penalty was expiring.  Leddy quickly got the puck over to Brent Seabrook who shot the puck and Pirri was in front to redirect it past Smith.  The Hawks would out shoot the Yotes 17 to 6 in the 3rd period but the game remained tied after 60 minutes.  The game would head to the shootout after a scoreless overtime period in which the Hawks out shot the Yotes 3-0. The shootout went into extra innings after Jonathan Toews and Radim Vrabata scored for their teams in the first three rounds.  Brandon Pirri was called upon to shoot fourth and took advantage of Smith's exposed five hole for the game clinching goal.  Mike Ribeiro beat Crawford with his shot but the puck rang off the post and stayed out.

* I was very happy to see Brandon Pirri bounce back from deflecting the puck past his own goalie in the 1st period.  He took it upon himself to score the game tying goal in the 3rd by getting to the front of the net for another redirect.  Q showed a lot of confidence in Pirri by giving him the call in the shootout and the kid came through. He was also pretty good at the dot too by winning 64% of his faceoffs. In fact, he won six of his eight draws against Antoine Vermette who came into the game with the most faceoff wins in the NHL.   Pirri said all the right things after game about having to improve on defense and playing a full 60 minutes.  It is obvious that Q likes what he sees from Pirri because he doesn't seem to have the short lease that most young players get.

* Speaking of players who don't have a short lease, what the hell is going with Brandon Bollig? I am done with him, not that I ever really started with him.  Yes he has improved. He has gone from completely useless to just terrible. If Jeremy Morin or Ben Smith would have picked up an extra penalty for mouthing to the refs they would have been shot out of cannon never to be heard from again.  But when Bollig does it he doesn't even miss a shift.  Bollig even got four shifts in the final nine minutes of a tied game. This is not a good idea.  I don't know why Q has a soft spot for Bollig but there are much better options on this team than throwing 52 out there every night.

* Nick Leddy is another guy that should get consideration for the US Olymic team.  Can you imagine what he could with even more skating room? Leddy used his speed and stick to pick up two more assists.  I tried to look up what Cam Barker did last night but I had no luck finding any numbers.

* Mike Smith and Andrew Shaw got reacquainted last night in just another example why Smith is a giant pud.  Smith took exception to some contact between the two players early in the 3rd period.  First off, Shaw was pushed into the goalie and Smith stuck his arms out to make sure there was contact.  Affer the play he grabbed Shaw and drew a penalty which wiped out a Coyotes power play.  I'd be pretty pissed off if my goaltender cancelled out a power play in the 3rd period of a tied game due to a selfish display of douchebaggery.

* Johnny Oduya had a rough night.  He had a major case of the yips and was very unsure with the puck.  He allowed Shane Doan to go right by him on the Coyotes first goal and was very late getting to Lauri Korpikoski on his goal.  He was also shaken up on a play during the 3rd period when he took a knee to the side of the head.  He stayed on the ice and was hit hard again by Doan.  A lot of people got upset over this but there was nothing wrong with Doan's hit as Oduya played the puck. 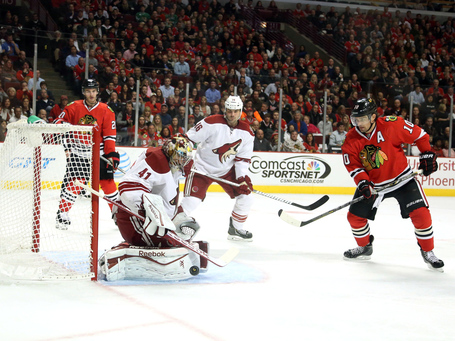 It pains me to give any credit to Mike Smith, but when you make 48 saves to steal on point on the road you are the best player on the ice.  The Coyotes had no business taking this game to overtime but Smith was their to bail out the crappy defense in front of him. Now excuse me while I take a shower. I feel so dirty.