The Hawks force their will during a 5-1 win over the Sharks.

The Hawks would get the scoring started with a late goal 16:34 into the 1st period.  Patrick Kane ripped a shot from the right circle that didn't get through but Brandon Pirri was in the right place at the right time to pound the puck past Antti Niemi.  Kris Versteeg got the secondary assist on Pirri's sixth goal of the year.

Versteeg's evil twin Joe Pavelski was given credit for his eight goal of the year on a very goofy play 8:16 into the 2nd period.  Pavlelski took a high shot from in between the circles that Corey Crawford was able to glove. Crow looked like he was going drop the puck to play it but bounced behind him and into the net.  The Hawks would regain the lead at 12:08 when Patrick Sharp was set up beautifully by Marcus Kruger for a one timer.  Brandon Saad would get the first of his two assists for the night on the play.

The Blackhawks would keep their collective foot on the pedal in the 3rd period and added three more goals to pull away. The first came from Jonathan Toews at 3:39 when he followed up his wrist shot from the right circle and was able to put the rebound back in.  Ben Smith and Patrick Sharp set up the captain.  Versteeg would score his first goal in his second go round with the Hawks at 15:10.  Brandon Saad created the play by driving hard to the net on a semi breakaway but was stopped by Niemi.  Saad corralled the puck back in and waited for Versteeg to get to the front of the net where he hit him with a great pass.  Brandon Pirri picked up the secondary assist on Versteeg's third goal of the year.  Sharp would convert on a penalty shot at 18:49 to score the Hawks' fifth and final goal of the night.

* The Blackhawks played a great defensive game on Sunday night.  The Sharks average over 36 shots a game, which it tops in the NHL, and the Hawks held them to just 24.  If it wasn't for that weird goal, the Hawks would have shut out the second highest scoring team in the league.  Their defense was also credited with 10 takeaways including three each by Niklas Hjalmarsson and Jonathan Toews.

* I am very pleased to see the confidence Coach Q has in Brandon Pirri.  He is starting to show is offensive skills more and more which is easy to do when you have Patrick Kane on your right wing.  Pirri has 11 points on the season and five in last four games.  We all know that Q does not like young players but that doesn't seem to be the case with Pirri, which is a good thing.

* It was nice to see Corey Crawford have a nice rebound game after giving up five goals on 22 shots Saturday night.  It still have no clue what happened on the Sharks lone goal but the important part is what happened afterwards.  There was a time in Crow's career where a play like that would have shattered his confidence and lead to more goals, but that wasn't the case last night.  In fact, it looked like the goofy goal didn't phase anyone in red.

* We are always hearing about the embarrassment of riches the Blackhawks have in their system and yet we have to keep watching Sheldon Brookbank take useless minutes at the 3rd line wing.  I have no clue why Jeremy Morin is hated by Q but there has to be a better option.  Bryan Bickell and Andrew Shaw are guys who can be difference makers but it is hard for them to really get going when the team's seventh defenseman is lugging up and down the ice with them.  The Hawks will need to call up another forward for the circus trip and with Marian Hossa ailing you might see them bring up two of the Hogs.

* Sunday was one of those nice games where the time on ice was well distributed.  The second pairing of Hjalmarsson and Johnny Oduya lead the team in minutes with just over 21 each.  No forward hit the 18 minute mark.

* I had forgotten how much I love that little idiot Kris Versteeg.  I am so thrilled to see him back in an Indian Sweater and you can tell how happy he is to be back.  VerBeauty has three points in his first two games back and is already showing his versatility in the lineup.  He is going to be an excellent fit for the rest of the season. 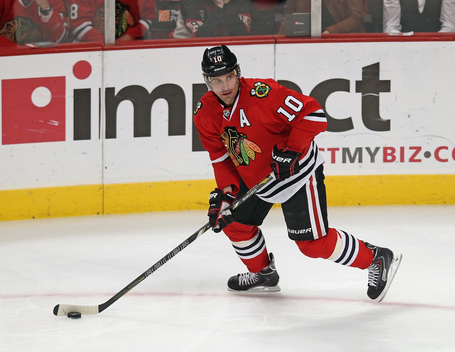 The Handsome Shooter was back at it again on Sunday night.  Two goals and an assist is what we call in the business a "good night."  We all know Patrick Sharp can get on some crazy hot streaks and with the circus trip coming now there is no time like the present for on of those scoring binges.