The Blackhawks roll four lines to blow past the Jets in their first meeting as division rivals.

The Blackhawks started their Saturday matinee in Winnipeg a little bit on the sluggish side.  They came out looking like a team who hadn't played in four days.  As the case with many afternoon games, after a few minutes the Hawks got their legs underneath them and put together a well rounded team victory.

The afternoon started with the Kenyan Boys Choir signing both national athems wearing pants that would have made Don Cherry blush.  Winnipeg would open the scoring when Tobias Enstrom got a slap shot through traffic and past Corey Crawford.  Crow immediately complained that the he was interfered with by Michael Frolik, but the replay showed minimal contact.  Frolik, the former Blackhawk, picked up and assist on the play as well.  The Hawks would tie the game shortly after a sequence that saw three penalties, two of which were on the Jets, called in 41 seconds. At 9:58, Niklas Hjalmarsson ripped a one timer, off a clean faceoff win by Marcus Kruger over the shoulder of Ondrej Pavelec for his first goal of the season. The Blackhawks recieved a major scare late in the period when Crawford was slow to get up after a collision with Blake Wheeler.  Winnipeg fans thought this was a good time to continue their "Craaaawwwwford" taunts, which was completely uncalled for.

The Blackhawks would wast no time taking control of the game in the 2nd period as they took the lead at the 54 second mark.  Brandon Bollig and Marcus Kruger entered the Winnipeg zone on a two on one rush.  Bollig kept the puck and put a well placed wrist shot up and over Pavelec.  The Hawks would double their lead less than two minutes later with Patrick Sharp's third goal of the season.  Nick Leddy poke checked the puck away from Bryan Little at his own blue line.  Marian Hossa took the puck and made a nice pass to Sharp who got in all alone and deked Pavalec out of his jock strap.  Leddy would add on to the score with a goal of his own at 5:49.  Andrew Shaw made a pass from behind the Winnipeg net to Jeremy Morin, who whiffed on the shot, but Leddy was there to slam it home.  Leddy's second goal of the year chased Pavelec from the game and Al Montoya took over for the rest of the afternoon.

Ben Smith scored the only goal of the 3rd period.  He made a great play by getting in front of the net and deflecting a Brandon Bollig shot past Montoya for a 5-1 Hawks lead.  Duncan Keith picked up the secondary assist on Smith's second goal of the season.  The Blackhawks return home tonight as they have a date with the Calgary Flames tomorrow night.

* I am not surprised that four of the five Hawks goals came with 3rd and 4th line players on the ice.  These are the types of matchups where the depth on the Chicago bench will just kill teams like the Jets.  Guys like Bryan Bickell, Jeremy Morin, Andrew Shaw, and Marcus Kruger could be much higher on the depth charts for a lot of teams around the league.  When they play teams who do not have a ton of talent on their bottom six the Hawks 3rd and 4th lines can do some damage. The Hawks will have another one of these favorable matchups tomorrow against the Flames.

* Nick Leddy has really been improving this year and had monster game.  Another two points, including his second goal, has his point total up to eight for the year.  The Hawks defensemen as a whole have been very involved in the offense.  They have combined for nearly a third of all the team's points, having accounted for 39 of the Hawks 128 points this year.

* Jeremy Morin looked like he was going to be forever banished to Coach Q's doghouse, with nothing to do but try on pairs of white shoes left behind by Viktor Stalberg.  He was defensively responsible for Tobias Enstrom on his goal but was caught play way too low.  Morin did not get another shift for the rest of the 1st period.  A message was sent and he responded by being very noticeable in the 2nd and 3rd periods.  It was nice to see a positive response and hopefully it was a lesson learned.

* Yesterday I started a write up full of "fancy stats" on why Brandon Bollig should not be immune to Q's lineup shuffle.  I can crumble that post up and throw it in the trash now because he is not going anywhere after his two point game today.  Bollig's first goal was created by him getting to the front of the net and putting back a rebound.  His second goal was an actual NHL goal; a really nice wrist shot placed in a spot where Pavelec had no chance to make a save.  In case you are wondering, he now has four more points than the aforementioned Viktor Stalberg. Go Perds!

* The Blackhawks have scored 16 goals in the three games since Michal Handzus' upper body injury.  I am not saying his absence has caused the recent offensive explosion, but I hope he is put on the bottom six upon his return.

* Marcus Kruger had one of his best games of the season. Not only did he pick up two assists but he finished a +3 and won 11 of his 15 faceoffs.  Keep it up Frogger!

* Patrick Kane beat both Winnipeg goalies to their glove sides but was stopped by the goal post on both plays, including a penalty shot in the 3rd period. 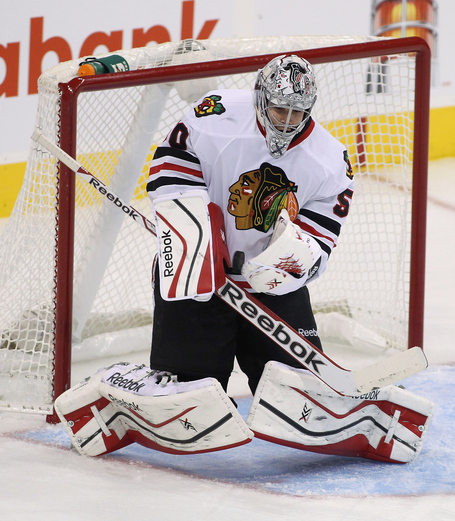 Corey Crawford was fantastic today.  Crow came up with 26 saves on the day, including a huge one on Andrew Ladd while the game was still tied at one goal apiece.  I am thinking he was very satisfied shutting up the Winnipeg fans who taunted him while he was slow getting up after being run into by Blake Wheeler.  He was also solid in the puck handling department today.  He came out of his crease a few times to help his defensemen out by confidently moving the puck.  It will be interesting to see if he gets the nod again tomorrow night.

An added bonus; here is some post game audio of Q, Jonathan Toews and Corey Crawford from our friends at Illegal Curve