Blackhawks Take One On The Chin

The annual circus trip gets off to less than desired start with a 5-1 loss in Colorado.

Share All sharing options for: Blackhawks Take One On The Chin

For the second straight road game the Blackhawks got blown away on the scoreboard despite leading in many other stats.  When you look at the Corsi numbers below, if you didn't know the score you'd think the Blackhawks won 5-1 instead of what really happened. Much like Saturday in Nashville, the Hawks could not overcome some early goals and a 1st period goaltending change and lost another road game within the division.

Colorado started an avalanche of goals at 6:37 of the 1st period. Brent Seabrook tried to pass the puck around the boards to his defensive partner but it bounced right out in front where Paul Statsny fired a wrist shot past Corey Crawford.  More sloppy play within their own zone led to Gabriel Landeskog deflecting an Andre Benoit shot past Crow at 12:21.  The Avs would tack on a 3rd goal less than a minute later when John Mitchell was given way too much space in the slot.  Crawford would be pulled after giving up three goals on seven shots and replaced by Annti Raanta, who would make his NHL debut.

The Blackhawks would dominate the play for the most the 2nd period but would have nothing to show for it.  Patrick Kane, Ben Smith and Jonathan Toews all had chances in close but could not cash in.  Blackhawks legend P.A. Parenteau would add a fourth goal on a 2 on 1 with just over a minute to go in the middle frame.  That goal hurt the most because it came seconds after Toews looked like hew as going to get the Blackhawks on the board. The Hawks held a 27-15 lead in shots after the 40 minutes but were getting skunked in the only stat that matters.

The 3rd period didn't get off to the greatest start as Cody McLeod put back a rebound, at the 1:44 mark, to increase the Avs' lead to 5-0.  Brandon Saad would do his Paul Bunyan impression at 12:10 to get the Hawks on the board. Saad took two big whacks at a rebound, while skating by the crease, to put the puck past Seymon Varlamov.  Patrick Kane and Duncan Keith assisted on the Manchild's 6th goal of the season.

* Bryan Bickell left the ice with about nine minutes to go in the 1st period, after going back first into the net, and did not return to the game.  It appeared that he banged his ankle hard off the post.  He was able to skate off on his own power but Q told reporters that his lower body injury "could be a bit or day-to-day."  This left the Hawks with just 10 forwards since they did not call anybody up from Rockford to start the trip.  Nothing like having Patrick Kane skate for over 21 minutes, in the thin air of Denver, during the first game of a seven game road trip. Sheldon Brookbank still played less than 10 minutes despite the game being well in hand during the 3rd period.

* Corey Crawford gave up three goals on just seven shots before getting pulled for Antti Raanta.  There wasn't much he could do about any of those goals because the play in front of him was awful.  Raanta looked ok in his first NHL action.  He made a big stop on a Colorado 3 on 1 during the 2nd period.  He looked confident with the puck the few times he played it.  It was a small sample size but he looked like he can handle his own.  I would like to see him get the start in Winnipeg Thursday because Crow could use the extended rest.

* The forward played a pretty good game except when the puck went anywhere near the boards.  It seemed that every single board battle went the Avalanche's way.

* The defensmen seemed uninteresting in playing last night.  There was sloppy play all over the ice but it was in the neutral that I noticed them the most and not for the right reasons.  So much of the Blackhawks play relies on the defensive corp using their speed through center ice to help generate offense.  That speed was missing last night.

* It was hard to listen to Edzo defend Brandon Bollig.  If he needs to be yelled at by his teammates to skate instead of using his own eyes, he has no business being on the ice.

* So the Avalanche have a man who beats his girlfriend (allegedly) in net and their goal song contains "Rock & Roll Part 2" which is performed by a convicted pedophile.  Does anyone in their PR department have a clue? What's next, a third jersey that's logo includes the Abominable Snowman clubbing baby seals with a hockey stick?

Player(s) of the Game 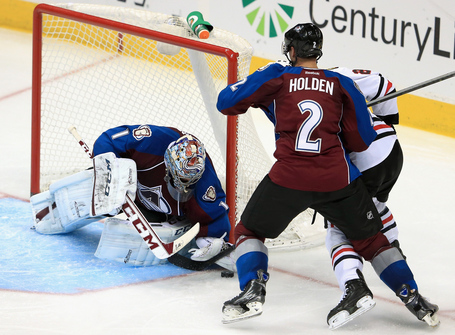 I could give this to Varlamov but I refuse to give any honor to this piece of human garbage (allegedly).  Besides, most of his really tough saves game with his team already up five goals.  I will say that the Avalanche defensemen, as a whole, played a real solid game.  The Blackhawks have gotten fat of late by putting rebounds back into the net but the Colorado blue liners where having none of that last night.  They combined for 17 hits, four takeaways and seven blocked shots.