Blackhawks Blow By The Jets

The Blackhawks score three times in the final period to take another two points from the Winnipeg Jets.

Share All sharing options for: Blackhawks Blow By The Jets

Can the Blackhawks play the Jets every week? The Hawks have now outscored the Jets 15 to 5 in their three wins against them this month.  The boys in white dominated the 1st and 3rd periods on their way to evening up their circus trip record to 1-1.  Now we get the listen to all the "biggest rivalry" crap until the puck drops in Vancouver Saturday night.

The first five minutes of the game looked like a practice for the Blackhawks as they were skating circles around the Jets. At one point the Hawks held a ten to one advantage in shots.  Evander Kane was called for tripping after sticking his leg out to get Brandon Saad on a very dangerous play.  The Blackhawks and Patrick Kane would need all of 28 seconds of the ensuing power play to net the first goal of the game.  For some reason the Jets decided to not challenge Kaner and give him 15 feet of space in the slot.  That is a very stupid strategy as 88 will kill you every time.  Kane lifted a wrist shot over Ondrej Pavelec who had no chance due to Andrew Shaw and Dustin Byfuglien battling in front of him.  Nick Leddy and Jonathan Toews assisted on Kane's 12th goal of the year.

The 2nd period got off to a crazy start in which we saw three goals scored in 48 seconds.  The first one was scored during 4 on 4 play by Brandon Saad at 3:03.  Marian Hossa took the puck away from two Jets to set up a wicked one timer from the Manchild. The Jets would respond with goals by Andrew Ladd, on the same 4 on 4 and Keaton Ellerby on the power play just 29 seconds later.   Ladd's goal was a wrist shot from the right circle after a neutral zone turnover.  Ellerby's was a slap shot from the blue line after a nice cross ice pass from Byfuglien. Jonathan Toews would give the Hawks the lead back, during another 4 on 4 session at 11:03, by powering his way around Ellerby to get to the front of the net where he stuffed the puck past Pavelec's short side.  Kane and Duncan Keith assisted on the captains 11th goal of the year. With Johnny Oduya and Michal Rozsival both in the box for lazy tripping penalties, Byfuglien would tie the game by using his long reach to put a loose puck back into the net.

The Jets would have a couple of extended shifts in the Hawks zone, to start the 3rd period, but could not come up with the tie breaking goal.  The Blackhawks would show their might as Marian Hossa would score his 10th goal of the season at 3:11.  Toews led Hoss to the net with a pretty back hand saucer pass.  Brent Seabrook had the secondary assist, his 12th of the season.  Ben Smith would drive hard to the net to pounce on a rebound giving the Hawks an insurance goal at 5:22.  Marcus Kruger and Kris Versteeg would assist on Smitty's third goal on the year.  Jonathan Toews would pick up his 4th point by assisting on a Patrick Sharp empty net goal to wrap up the game.

* Corey Crawford wasn't terrific last night but he wasn't terrible by any means either.  He was fighting off the puck most of the night and looks like a man that needs some time off.  I don't see how Q will sit him in Vancouver, even though the struggling Canucks could be a good spot to get Antti Raanta his first start.  We could see Raanta in Edmonton on Monday and again in Dallas on Friday.  Crawford gave up three goals on 25 shots which is not spectacular but he came up big when he had to.  He made nice play by poke checking the puck away from Bryan Little early in the 1st.  He also made some big stops when the Jets had two extended shifts in the offensive zone to start the 3rd period.  Crow didn't have his stick for most of the first rush from the Jets, but he kept the game tied and moments later the Hawks took the lead for good.
* Good to see Marian Hossa back on the ice being Marian Hossa.  Brandon Saad's goal was sexy from start to finish beginning with Hossa taking the puck away from Olli Jokinen twice before getting the puck to Saad. He is having his best season as a Blackhawk and if he needs to take a week off here and there to get this version of 81 in the post season, then so be it.
* Ben Smith has looked really good in the first two games of the road trip.  He had himself a well rounded game with a goal, three shots to go along with a takeaway and a blocked shot.  He started the play in which he scored on by getting the puck deep and then driving hard to the net.  I don't think it was a coincidence that the 4th line scored without Brandon Bollig on the ice.
* Kris Versteeg's love fest with Coach Q could have hit a bump in the road.  Steeger only got 10:20 of ice time last night which was the second lowest on the team after Jeremy Morin.  I don't see this being a trend and least it better not become one.  It was most likely Q sending Versteeg a message to remained focused. We shall see how he responds Saturday night.
* I get that part of Evander Kane's game is playing with an edge, which is fine, but last night he was just a pud.  First he fired the puck at Brent Seabrook after the play was whistled offside and then he had the dirty trip on Brandon Saad. The Hawks got their payback by scoring the game's first goal after Kane's dumb penalty and Seabrook was able to nail him with a good clean hit in the 2nd period.  If it wasn't for Kane acting like a clown you never would have known he was on the ice but the Hawks goal scorers knew when he was out there because he finished a -3.
* I want to buy into Andrew Shaw but I am always waiting for the dumb play.  I loved watching Shaw on the power play banging in front of the net with Dustin Byfuglien and later with Tobias Enstrom. The kid has stones, I will give him that, but it is the rocks in head that always worries me.
Player of the Game 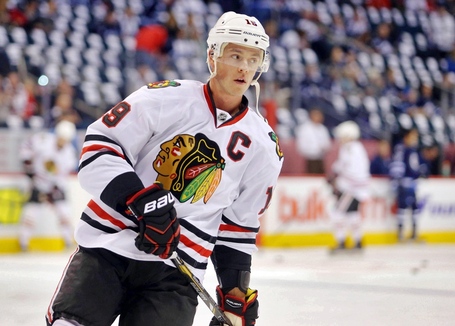 Winnipeg's greatest export had himself quite the game in front of his hometown fans.  His 2nd period goal was one of those moments where Toews puts the team on his back and leads them to the promised land.  He was not going to be denied on the play.  His pass to set up Marian Hossa's game winning goal was just magnificent.