Catching Up With Murray Bannerman

Former Blackhawks goalie Murray Bannerman stops by to talk about his days in Chicago, Corey Crawford and what he is up to these days.

Share All sharing options for: Catching Up With Murray Bannerman

Maybe you remember Murray Bannerman from his playing days in the 1980's.  Maybe you have met Murray at the United Center during an alumni autograph session or at the Blackhawks Convention.  Maybe you only know Murray from the famous call by Pat Foley that can be heard during the video montage before each home game.  Bannerman played his entire NHL career in Chicago, except for one game with Vancouver, from 1980 to 1987.  He had the very hard job of replacing the legendary Tony Esposito in goal but soon became a popular player with both Hawks fans and his teammates.

Last week I was approached by the fine folks over at Thuzio for an opportunity to talk hockey with Bannerman.  Of course I jumped all over the chance to talk to the man who was between the pipes when I started my love affair with the Chicago Blackhawks.

Tell us what it was like spend the first portion of your career in Chicago playing behind the great Tony Esposito.

Being in Chicago was a great experience, as was the opportunity to learn from someone who was a future Hall of Famer. On the negative side, it's always a little difficult not playing.

In my first year there, I only played in 15 games. It's not the easiest adjustment to make when you're used to playing all the time in juniors or the minors. It's a different mindset, not playing and having to prepare at the same time.

All in all though, I'd call it a positive experience.

What was it like to win your first two career playoff games in the hostile environment of the old Bloomington Met Center?

Obviously it was a great feeling. If you look at that playoff year, we went into that series as huge underdogs. I think Minnesota finished 44 points ahead of us in the standings. To be able to go into that building and win two games when nobody outside of our dressing room gave us a snowball's chance in hell was a good feeling.

It was my first playoff experience in the NHL, kind of a coming out if you will. You always want a chance to prove that you belong in the highest level and it was a very good opportunity to show that.

Who were your favorite teammates from your days with the Blackhawks? Who did you hate to play against the most?

Back when I played, we were a very close team. We all hung out together. Doug Wilson comes to mind because we hung out a lot and I knew him from juniors. Troy Murray was another guy, who happened to be my roommate for five or six years.

As far as people you hated to play against, the Edmonton Oilers come to mind. They were obviously very good, scored a lot of goals and as a goaltender, they were a tough challenge to play against, especially in Edmonton.

How is playing in the NHL today different from how the game was played back in the 80's?

There are quite a few differences, especially from a style perspective. When I played, goalies typically stood up and positioning was important, but so was reaction.

If you look at today's game, and a large part of it are the improvements in equipment, goalies will go down, with an emphasis on positioning and hope that the puck hits them. Goalies today also have tremendous ability to move side-to-side.

For instance, if you watch a game today and you see a goalie consistently getting hit in the chest or pads, he's spot on. He's moving around well and he doesn't have to make too many of those acrobatic saves. It's probably a better style than the way we played in the 70's and 80's.

The game itself is faster, everyone shoots the puck hard. It's probably more of a challenge from a talent level from top-to-bottom throughout the entire league. All of these guys are good. 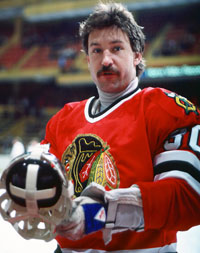 What part of Corey Crawford's game impresses you the most? Which part needs the most improvement?

One of the things Corey struggled with early on in his career was positioning. He played a little further out of the net and had a tendency to get caught out there. Last season, his positioning was very, very, very good. I watched a game a few weeks ago and there were shots he couldn't even see, but he stopped them because he was positioned well. It's a very strong part of his game now.

And to do the things he's done, like winning a Stanley Cup, his concentration has to be phenomenal. I don't see a lot of weaknesses in his game anymore. He's solid across the board.

I know there was a big deal on goals getting scored glove-side last year during the playoffs, but it wasn't a consistent thing. Some games it happened and others it didn't. But I don't see a lot of those weaknesses anymore to be honest with you.

How much joy do you get being a part of the Blackhawk Alumni Association and seeing all the rabid Hawks fans when you come back to the United Center?

For me, it's really enjoyable. There was a stretch and time where the team wasn't doing well, attendance was down and the caliber of the club wasn't where it should have been. You'd run into people on the street and they'd ask me ‘what's wrong the with Hawks?' or ‘why aren't you in net with the way things are going?'

Now the atmosphere has completely changed, the city has changed, the energy in the arena has changed. It's wonderful for me to be a small part of that, even if I know that I have nothing to do with the success on the ice anymore.

Thuzio is a wonderful opportunity for fans to connect with me (or other Chicago athletes) for experiences like golf, dinner, even attending a game with me at the United Center.

It's easy to book online, just like you would with a hotel room, or a plane ticket. I also can't think of a better gift for the Hawks fan in your life. After all, you can only buy so many jerseys.

Finally, does Pat Foley send you any royalties for making him famous because everyone loves a good "B-A-A-A-NNNERMANNN!!" every once in awhile?

(Chuckles) Nope, he doesn't, but that's an interesting thing. I think Pat would tell you that the call was good for his career, especially in Chicago. I have to look at it realistically as well, having played eight seasons, some good, some not so good, but because of that call, my name still resonates with people. It's been a good thing for me.

Be sure to check out Murray Bannerman's profile on Thuzio to see kind of unique experiences you can share with him or other Chicago athletes.  A big thank you to Murray for taking some time out to chat with us!