The Blackhawks use nine seconds to take a victory away from the Canucks.

It was nice to see the Blackhawks play a good road game without Marian Hossa because the last two without him were disasters.  The Hawks used their depth to earn a hard fought two points over the Canucks.

The 1st period was a well played, fast paced period for the majority of the 20 minutes.  Both Corey Crawford and Roberto Luongo were able to answer the bell.  Bobby Lu made a couple of nice poke checks to deny some scoring chances.  Midway through the period the Brandon Pirri and Patrick Kane broke off on a 2 on 1 but Kaner, like a few other Hawks in the 1st, shot the puck directly into the glove of Luongo.  WIth Brandon Saad already in the box for slashing, Andrew Shaw thought it would be a good idea to take an interference penalty while the Hawks had the puck. Shortly after Ryan Kesler would give the Canucks a 1-0 lead at 18:33 by putting back a rebound from a Jason Garrison shot past Crawford.

The game would remain 1-0 after the 2nd period but the Hawks were lucky to remain trailing by just the single tally.  Duncan Keith used his stick to deny Alexandere Burroughs chances at an open net not once, but twice.  Vancouver would out shoot the Hawks 13 to 9 in the sandwhich frame.

The Blackhawks would make 17 seconds look like an eternity by scoring twice in nine seconds. Andrew Shaw would make up for his dumb penalty be deflecting a Patrick Kane shot past Luongo to tie the game at 4:40.  Duncan Keith picked up the secondary assist when he started the play by flicking the puck towards the net.  Shortly after the Shaw goal Niklas Hjlamarsson made a nice pass through the neutral zone that found Marcus Kruger who put the puck between the legs of Luongo at 4:49. Johnny Oduya, who was guilty have a really dumb boarding penalty in the 1st period, picked up the secondary assist on Frogger's third goal of the year.  The Canucks would get a few chances in the final 15 minutes but Crawford stood tall to hold off the men in blue.

* The Canucks bring out the best in Ben Smith who played his finest game of the season.  I still don't know how he wasn't credited with the primary assist on Marcus Kruger's game winning goal but he was still very noticeable all night long.  It is evident that he has earned the trust of Q because not only has he dressed in ten straight games but he got a season high 17:26 in ice time.  He got some time on the PK unit where he nearly scored a shorthanded goal in the first period.  Smitty even won five out of the seven faceoffs he took on the night.

* Nobody should be worried about the Canucks from here on out. They are a very pedestrian team.  There is a reason the Sedins and Ryan Kesler has to play all the time.  If Dale Weise had an ounce of hockey talent he would have tied the game in the 3rd period.  Roberto Luongo is playing his ass off this year but he will be the scapegoat in another season where the Canucks fail to move out of the first round.

* Nights like tonight have to put Dunacn Keith in the Norris discussion.  He made two huge plays to prevent Alexander Burroughs, who still sucks, from scoring.  He picked up his 17th assist of the year which the last time I checked, helps you win the Norris at season's end.

* Duncan Keith can be that dynamic player when he doesn't have to cover for Brent Seabrook and tonight was one of the few nights this year when Seabs was on point.  He was very sure with the puck all night long, had great positioning and was the physical presence we are use to seeing out of him.

* I don't have the hatred for the Canucks like used for a few reasons.  Alain Vignault moving to the Big Apple helps ease my ire.  The fact that this team just isn't a threat to the Hawks, in my eyes, is another reason my blood doesn't get boiled like it used to.  But, when I see Alex Edler taking liberties with Jonathan Toews I quickly remember why I hate this organization.

* Why do the Blakhawks always make the wrong decisions on 2 on 1 plays? Whenever they should shoot they pass and when they should pass they shoot.  Brandon Pirri should have used the element of surprise by taking the shot on his 2 on 1, in the 1st period, instead of deferring to Patrick Kane like everyone knew he would.  Marcus Kruger had a chance to score a second goal in the 3rd period but elected to pass instead.  It is ok to use the star players as decoy every once in awhile.

* Ryan Stanton likes to pinch and for that, I am grateful. 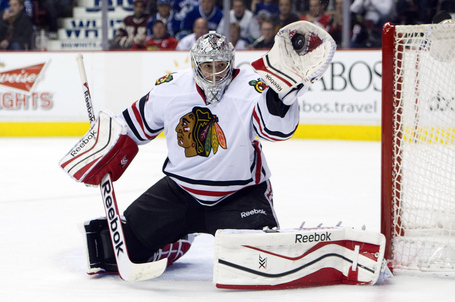 Corey Crawford showed no signs of playing in 14 straight games tonight.  He flat out stole two points which is what elite goaltenders will do from time to time.  With that being said I hope we don't see Crow again until Wednesday because this man has earned some time off.