Blackhawks Steam Roll The Oilers For Their Third Straight Win

The Blackhawks score early and often in their 5-1 blowout of the Edmonton Oilers.

Share All sharing options for: Blackhawks Steam Roll The Oilers For Their Third Straight Win

Monday night was another perfect example how the Hawks can dismantle lesser teams.  The bigs guns set the tone early and the role players followed their lead to complete game victory.

Any hockey coach in the world will tell you the key to winning on the road is getting off to a fast start which is exactly what the Blackhawks were able to do.  Ben Smith was called for a trip 4:24 into the game which should have given the Rexall Place a boost but instead the Hawks would take the air out of Edmonton's collective tires by scoring a shorthanded goal.  Brandon Saad's clearing attempt went a bit lame when his stick broke but Nail Yakupov whiffed at the blue line which send Jonathan Toews off to the races.  Tazer would drop his shoulders and fake Devan Dubnyk out of his jock at 5:14.  Duncan Keith picked up the secondary assist on Toews' 12th goal of the season.  The Hawks special teams would double the lead with a power play goal at 8:06.  Keith took a shot from the point and Andrew Shaw did the dirty work in front to get the puck loose where Patrick Kane put it up and over Dubnyk.  The goal would be Kane's 13th of  the season and his sixth on the power play.

Christmas would come early for the Blackhawks at 1:28 of the 2nd period as Corey Potter would deflect a puck into his own net.  There really wasn't much he could do as the rebound from a Johnny Oduya slap shot hit Potter in the face as he skated by and went into the net. Marcus Kruger and Brandon Bollig would be given assists on Oduya's second goal of the year.  The Hawks would add a fourth goal at 5:29 thanks to a great play by Jeremy Morin.  JMo would should some great patience skating around a sliding Andrew Ference and passing to a wide open Andrew Shaw, at the last possible second for an easy tip in goal.  Shaw's sixth goal of the year would chase Dubnyk from the game and Ilya Bryzgalov would come in to make his Oilers debut.  Justin Schultz would get  the Oilers on the board at 8:08 when he sniped a one timer past Crow after a need feed from behind the net by the Nuge.

Bryzgalov made some good saves after coming in cold but it would be Shaw that would finally get one past him at 18:08 of the 3rd period.  Nick Leddy was able to track down the rebound from a Brandon Saad shot and quickly shot it towards the net. Shaw, like always, was in front of the net and deflected the shot past Bryz for his second goal of the night.  The Blackhawks will remain in Alberta and take on the Flames Wednesday night with Marian Hossa and hopefully Annti Raanta between the pipes.

* I am hoping Monday night was the game that will get the penalty kill rolling.  Not only did they score a short handed goal but the limited a pretty potent power play to just two shots in six minutes.  I don't believe that the Hawks struggles on the power play are solely based on the loss of Michael Frolik.  I think a lot of special teams play begins between the ears.  Last season the power play struggled early and never took off.  This year it clicked from opening night and has carried over throughout the first 25 games of the year.  Hopefully the PK's performance last night can spark some confidence where we see a better effort with a man in the box.

* Corey Crawford was good last night on his way to his league leading 16th win.  He made a couple of big saves in the 1st period.  The first coming on a Alex Hemsky shot early where thankfully Sam Gagner missed the net on the put back.  Crow would then rob Ryan Smyth twice in front of the net with about five minutes to go in the opening frame.  He would later give us this gem:

At some point Crow will need to get some extended periods of rest.  The extra work load has not effected his game yet, but it will come April and May when the games are much more important.  In his post game presser, Q sounded like Raanta will start tomorrow in net but you never know when it comes to the all knowing mustache.

* I have been on the record for saying that Duncan Keith would never return to his Norris Trophy winning form of 2010.  I couldn't be more pleased to stick my foot in my mouth! He had a great bounce back year last year and was in the Conn Smythe discussion at the end of the playoffs.  He has carried his successful 2013 season into this year and is playing better than he has in a long time.  He now leads all defensemen with 19 assists, which is a big to Norris voters these days.  His skating and confidence handling the puck are at all time highs. It's funny to me that Duncs has been playing his best hockey over the last ten months when is partner Brent Seabrook has been terribly inconsistent during this same time period.

* Dallas Eakins was one of the bright young coaching prospects last summer but his career behind the bench is not off to the greatest of starts.  For some reason he decided to put five forwards out for his team's first power play which of course produced the Jonathan Toews shorthanded goal.  The Nail Yakupov whiff at the blue line is why I hate putting fowards at the point on the power play.  I can understand going with this strategy if you are down a goal late in the game, but to do it five minutes into a scoreless game makes no sense.  The Oilers have enough problems and trying to overcome coaching errors should not be one of them.

* I still don't know what I am missing in that Jeremy Morin continues to get the least amount of ice time every night.

* Once a Blue always a Blue. David Perron decided to use his final shift of the night to take runs, with his elbows out, at Johnny Oduya and whack Brandon Pirri with his stick on his way to the bench.  I'd wish ill will on this pud but he is already playing in Edmonton.

* Steve Konroyd pointed out during one of the intermissions that Edmonton has best ice surface in the league.  Could you imagine how disgustingly good the Hawks would be if the United Center has a surface like that? 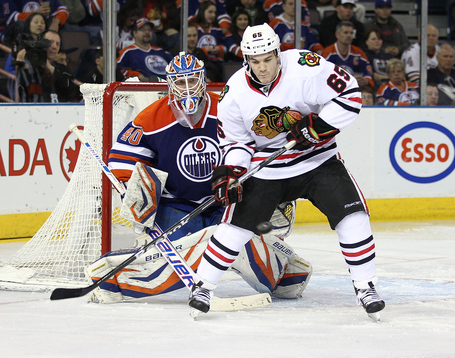 Andrew Shaw is doing his best to try and win me over.  We have seen the full spectrum of what he can do in the last two games.  He took the dumb penalty, while the Hawks were already down a man, against the Canucks that led to their only goal.  He followed that up by scoring two goals and adding assist in the following four periods.  What he lacks in size and talent he makes up with pure guts.  I can't help but love the guy for constantly getting into the dirty areas of the ice with no fear, but I want to strangle him when the meathead comes out.  To his credit, the meathead does not come out as often as it used to.