The Blackhawks use some late game heroics in Calgary to improve to 4-1 on the circus trip.

Don't fall asleep before the 3rd period when the Blackhawks are in Calgary because you will miss quite a bit.  The Hawks looked to be on cruise control for much of the night but turned it on during the final 11 minutes of the game to escape Alberta with two more points.

The 1st period was much of the same for the Blackhawks against Reto Berra; they had plenty of chances but could not come up with any goals.  The Hawks would spend four of the first seven minutes on the power play.  Patrick Sharp would miss the net high once on each man advantage.  Marian Hossa skated around three Flames, on the second power play, and tried to put a backhand shot between Berra's legs but he was denied.  Calgary would get some pressure in the final minute of the period and forced Annti Raanta to make a save on a redirect with his head.

The Flames would open the scoring 13:32 into the 2nd period.  Michal Rozsival got the puck up the boards but Jonathan Toews, in a rare lazy play, could not get it out of the defensive zone.  Jiri Hudler jumped on the puck and shot it across the ice for Matt Stajan who buried a one timer past the glove Raanta.  The Hawks only managed five shots on goal during the middle frame.

Calgary would double their lead 2:05 into the 3rd period. The Flames gained the zone after a Brandon Pirri and everyone drifted to the puck carrier and left Sean Monahan wide open who lifted and nice wrister past Raanta.  The Hawks had so many good scoring chances in five and a half periods versus Barra but they would quickly score twice on two less than attractive goals.  Patrick Kane would extend his point streak to 12 games by scoring from a very familiar spot on the ice.  He skated the puck down to the goal line where he flicked the puck towards the net.  The shot would deflect off of Kris Russell's stick and into the net. Brandon Saad and Duncan Keith assisted on Kane's 14th goal of the year  Patrick Sharp would finally get one past Barra just 56 seconds later. Niklas Hjalmarsson got the puck out of his zone with a good stretch pass to Marian Hossa, who was able to somehow get a centering pass off while in between three Calgary defenders.  Sharpie was in the right place at the right time to tip the puck into the net for his ninth goal of the year.  While I was in mid-Tweet about how I hate three point games against Western teams Patrick Kane would strike again with just 18 seconds to play.  Hjalmarsson took a shot from the point that got blocked on the way to the net.  The puck found Kane who took a blind backhand shot that found its way into the net.

* Annti Raanta was ok in earning his first career NHL win.  He was able to make some good saves throughout the game but he showed why he could still use some time in the AHL.  Raanta comes out of his crease to challenge shots a bit too much for my liking which is a characteristic of many young goalies including Reto Barra.  He is also a bit slow moving post to post.  He's faster than Ray Emery was but he still needs some work at it.  I would hide him against the teams with major offensive fire power until he can make this improvements but he was still light years better than Nikolai Khabibulin.

* It was good to see Patrick Sharp get the game tying goal after missing out on quite a few chances.  As stated earlier, he missed high and wide twice in the 1st period.  He whiffed on a shot into a wide open net in the 2nd period .  Even after his goal he wasn't able to hit the net while Barra was down and out.  Edzo tried to say that Sharp was just trying to settle down the puck when he scored but I am pretty sure he did exactly what he intended to do on that play.

* Why does everyone involved in a Blackhawks broadcast insist on trying to tell me that Brandon Bollig has value? I'm sorry but I would much rather have Jeremy Morin in his spot.  Pat and Eddie also spent some time in the 3rd period telling us how effective the 4th line was.  Sure Marcus Kruger had a couple of nice shifts early but the Corsi numbers tell you they were not as great as the broadcast team would want you to beleive.

* The Flames entered Wednesday's game as the worst faceoff team in the NHL, yet they were able to win 58% of the draws.

* It was very unfortunate that Pirri's defensive lapse came on his first shift back on the second line.  His bad play in the neutral zone earned him a trip back to Q's doghouse which means more of Michal Handzus literally anchoring Saad and Kane.  Pirri only got two more shifts after the Monahan goal.

* The Flames are not a very good hockey team but I would rather be a fan of theirs than the Oilers.  Edmonton has all the glamorous first round picks but they don't play very good hockey.  Calgary doesn't have much pure talent but I will give them credit for playing a solid team game.  They do not get caught out of position much and that do a good job clogging up the lanes.  They had 29 blocked shots which is a damn good stat. 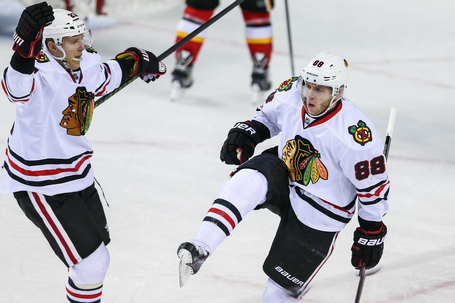 Patrick Kane has a Calder, an Olympic medal, a Conn Smythe and two Stanley Cup rings in his portfolio.  It looks like he is on a mission to add a Hart Trophy to his collection.  And don't be surprised if he has a major role in upgrading his silver medal to gold come February.