The Blackhawks escape from Dallas with two points after a crazy 11 round shootout.

Share All sharing options for: Blackhawks Dig Deep For A Shootout Win

The way Patrick Sharp has been playing in Texas this year makes me wonder if it's too soon to make sharp shooter jokes in Dallas. The Hawks were able to overcome a ton of sloppy play to grab a shootout win.  The circus trip ends in Glendale, AZ tomorrow and worst case scenario the Hawks go 5-2 which is pretty damn good.

The 1st period was a rather entertaining, fast paced period.  The Blackhawks would get a couple of chances early but couldn't get the puck past Kari Lethonen, who actually had help from Marian Hossa in keeping the puck out at one point.  As the period progressed the Hawks became more and more sloppy with the puck.  A neutral zone turnover led to a Jamie Benn breakaway but Niklas Hjalmarsson made a fantastic recovery to prevent a clean shot.  The Stars would cash in on some of the Hawks carelessness with the puck at 16:40 to score the game's first goal.  Nick Leddy failed to get the puck out of his zone and the wound up in behind Corey Crawford.  Crow tried to play the puck below the goal line but lost the puck to Shawn Horcroff who got it out in front to Rich Peverly who was able to score on the out of position Crawford.

The 2nd period did not produce any goals but it was not without it's fair share of drama. Alex Chiasson would be awarded a penalty shot thanks to a Brent Seabrook trip 2:39.  Chiasson would beat Crawford to the glove side but got all iron for his efforts.  Former Blackhawk Stephan Robibas would get carted off on a stretcher after suffering a leg fracture on a freakish play where his skate got caught on the ice.  Late in the period Patrick Kane was slow to get off the ice after at shot to the face from Antoine Roussel.

The Blackhawks would tie up the game up 7:21 into the 3rd period. Patrick Sharp got the puck deep then used the forecheck to force Alex Goligogski into turning the puck over.  Duncan Keith would quickly shot the puck towards the net where Sharp would be in front to deflect it past Lethonen for his 10th goal of the year and his fifth point inside the American Airlines Arena.

The game would go into overtime but each team was only able to generate one shot on goal apiece.  The shootout would jump right over Ridiculous speed and go straight to Ludicrous Speed as it would go 11 rounds before ending.  Patrick Sharp scored in the 2nd round and Rich Peverly scored in the 3rd round for Dallas to keep the game going.  Ben Smith would put the game on ice with a nice snipe over Lethonen to give the extra point to the good guys.

* Let's face it, the Blackhawks stole two points Friday night. They had no business winning this game with the sloppy play in their own zone.  Somehow the Hawks were only credited with 13 giveaways but that is a very kind number.  The defensive core was terrible with the puck.  Brent Seabrook, Duncan Keith, Niklas Hjalmarsson and Nick Leddy were all guilty of inexcusable turnovers.  This was one of Seabrook's worst games of the season.  He was forced to make some good defensive plays because of his craptacular decisions with the puck.

* Patrick Kane's 12 game points streak ended tonight but not because he didn't try.  Kaner finished the night with five shots on goal and three scoring chances.  Saturday night would be the perfect time for him to start a new scoring streak.

* Being a Blackhawks fan I have come to love teams who block a ton of shots. Hats off to the Stars for their efforts in this category on Friday.  They finished the night with 25 blocked shots nearly doubling the Hawks 13.  Teams do have to be ready to get in front of shots when the Hawks come to town because they are shooting every chance they get.  The Blackhawks attempted 51 shots tonight getting 26 of those to net.

* While we are on the subject of the Stars, they do have quite the collection of asshats on their roster.  Antoine Roussel took a couple of runs at Patrick Kane and also went after Jonathan Toews after the whistle.  Ryan Garbutt also loves skating without his elbows out.  While they are not on the douchebag level with the Blues and Avalanche, they have just enough guys to hate to get a nice rivalry started. Roussel and Garbutt are no Basil McRae and Dino Ciccarelli but it's a good start.

* Brandon Pirri didn't do much to show up on the score sheet but he did a lot of the "little things" that can contribute to a win.  He did a really good job on the forecheck, especially in the 3rd period, that led to some Dallas turnovers.

* At the risk of sounding like Pat Foley, I am fan of Stephan Robidas and was saddened to see him get carted off the ice on a stretcher.  I wish him a speedy recovery and hope he returns to the ice soon.

* Speaking of Foley, the Soviet Union fell in 1991, so unless Vladislav Tretiak is coming out of retirement it is never a good a idea to refer to anyone as a "highly skilled Soviet." 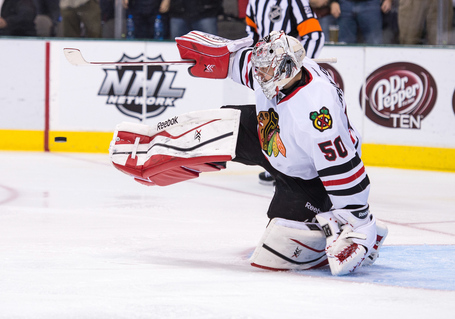 Corey Crawford had to work his nuts off for his 100th career win but he got the job done.  Yes, the Stars lone goal was on him but he had a solid night between the pipes and was fantastic in the shootout.  He looked refreshed after finally getting a night off.  With five games in the next eight days we better see Annti Raanta in goal Saturday night.