The Blackhawks drop a 3-2 decision to the Flames in overtime.

Walking into the United Center on Sunday night I felt that the recipe was just right for a let down game.  The Flames only had one win in their last five games, lost ten straight in Chicago and Reto Berra was in net for his first ever NHL start.  The Blackhawks came into Sunday's game having scored 16 in their last three games, winning all three of them.  Everything pointed towards an easy win for the Blackhawks, but as my father used to always tell me; "that's why they play the games."

The two teams were scoreless after the opening period though they combined for 29 shots on goal, 18 of those by the Blackhawks.  Patrick Kane got the scoring started at 6:25 of the 2nd period.  Kane was able to hold the puck for what seemed like a minute and was allowed to skate around the entire zone before snapping a wrist shot past Banna from the left circle.  Shedlon Brookbank and Andrew Shaw assisted on Kane's eigth goal of the season.  The lead wasn't meant to last long as Mike Cammalleri redirected a Dennis Wideman slap shot past Corey Crawford just 50 seconds after Kane's goal.

The Flames would take the lead 2:16 in the 3rd period when Curtis Glencross sniped a wrist shot over Crawford's glove from almost the exact same spot on the ice Kane scored from.  The Blackhawks were able to get an extended 5 on 3 power play, late in the 3rd period, after Matt Stajan was caught concealing the puck while Chris Butler was in the penalty box for holding.  Just as the first penalty was expiring, Kane set up Marian Hossa for a one timer that he blasted home from the right circle.  Duncan Keith picked up the secondary assist on the game tying goal.

Kris Russel would give the Flames the win with his second goal of the year 1:32 into overtime.  Everyone in the building was surprised that Russel took a shot from the blue line, but he got it over the shoulder of Crawford and just inside the goal post for a Calgary winner.

* This was one of those games where there really isn't anything to get too upset over.  It reminded me of the loss to Tampa Bay in early October.  Had the Blackhawks came out and laid an egg and lost 6-0, then you could be upset.  Not much you are going to do when an opposing goaltender plays out of his mind and makes 42 saves.  The Hawks did look a bit sluggish at times during the night, but they outplayed the Flames for the majority of the game.

* The Hawks obviously had a game plan to pepper the net with pucks.  They got 44 shots to the net, had 26 blocked and missed another 15.  A lot of those shots seemed to be shots just for the sake of shooting.  Berra was really good but a lot of the Hawks 44 shots came from a long distance with no traffic in front of him.

* It was good to see Nick Leddy get nearly 20 minutes of ice time.  He has earned more time and the trust of Joel Quenneville.  He has had a great start, both offensively and defensively, this year.

* Brandon Pirri was terrible at the dot, winning just two of his ten faceoffs.  On the flipside, Andrew Shaw was great by going 12 for 18.  That was probably one of the factors why Shaw and Pirri flip flopped between the 2nd and 3rd lines.

The Player of the Game 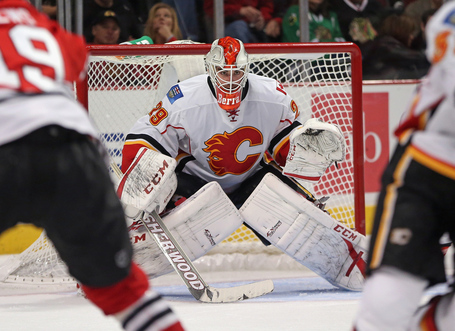 No dobut that Reto Berra was very impressive in his NHL debut.  He never showed any signs of being nervous about playing the defending Stanley Cup champs in their building.  I am not ready to put this kid in the Hall of Fame just yet, or even give him the #1 spot in Calgary, but he is off to a fine start.  Berra was very good with his pads.  When the Hawks tried to shoot high he flashed his glove to make even more saves.