The Blackhawks pick up their second win of the week over the Jets with a 4-1 beating at the United Center.

Share All sharing options for: The New Blue Jackets

Many people were upset that Columbus Blue Jackets moved to the Eastern Conference because of the Blackhawks recent dominance over them.  Well never fear the Winnipeg Jets are here!  After outscoring them 9-2 in their first two games of the year, it appears that the Jets could become the Blackhawks new punching bag.

Daydream Nation got the Blackhawks rolling late in the 1st period.  Jonathan Toews scored his eigth goal of the season at 17:29, just after coming out of the box.  He started the play with a great spin-o-rama pass to Patrick Kane who couldn't put the puck home.  Patrick Sharp and Ducan Kieth were able to keep possesion of the puck and found Toews all alone in front of the net for the tally.  Kane would double up the Hawks lead with just six seconds left in the opening perod.  Kaner, much like on his goal versus the Flames on Sunday, was given a ton of room and showed great patience before sniping the puck past Al Montoya.  Brent Seabrook and Duncan Keith assisted on 88's ninth goal of the season.

Brandon Pirri added to the Hawks lead with his 3rd goal of the year 18:02 into the 2nd period. Ben Smith caused a turnover just over the red line and found Pirri all alone at the blue line, who move in uncontested and fired a wrist shot over Montoya's glove hand.

Patrick Sharp didn't want to left out of the party, as he added an unassisted goal four minutes into the 3rd period. Sharpie pounced on a Blake Wheeler turnover on the left boards, walked the puck to the slot and snapped a quick shot, short side, over the right should of Montoya for his fourth goal of the year. Corey Crawford came within 11:20 of his first shutout  but Devin Setoguchi put back a rebound for his third goal of the campaign.

* Q will get the benefit of the doubt from me the majority of the time, but I don't get what he was doing with Jeremy Stalberg, I mean Viktor Morin,  Benching Jeremy Morin and replacing him with Sheldon Brookbank is mind boggling to say the least.  Morin has been fine since his call up.  He seemed to have responded well to his benching during the 1st period of last Saturday's game.  Q said he played Brookbank because he wanted to get both him and Michal Rozsival playing time.  I'm sorry, but I am not buying that.  Maybe there is something going on with Morin in practice that we aren't seeing.  If I was Stan Bowman I'd be having a little chat about that move with Q over our morning bagels.

* The 1st line of Patrick Sharp, Jonathan Toews and Marian Hossa has been rolling since being put together four games ago.  They have combined for ten goals during this time and were dominate last night.  The top line was a combined +43 Corsi, had 13 shots on goal and was credited with five takeaways.

* Nick Leddy had another good game and got nearly 18 minutes of ice time which is a good thing.  The more you can put Leddy out there, the less our top two pairings have to skate.  Leddy made two real nice plays in the 1st period.  Early in the game, I beleive it was Tobias Endstrom who got a breakaway chance but Leddy was quick to get back and interfere with the shot without picking up a penalty.  Late in the period he used his speed to force Al Montoya to play the puck and save an icing.  This allowed for the Hawks to make a line change and a few moments later Patrick Kane increased their lead to 2-0.

* It is no secret that I can not stand Dustin Byfuglien.  I hated him when he was with the Hawks and I was willing to drive him to the airport when he was shipped out of town.  All the evidence of why I think he sucks is in the first two Hawks goals of the night.  On both plays you see Byfuglien playing some very lazy defense.  That was my biggest problem with him when he was here.  Sure, every once in awhile he would go into beast mode and dominate a team, usually against teams with small defensemen.  Those games were great, but it was the 75% of the other games where had to watch this bum half ass it up and down the ice. You can keep your Big Buff.

* Finally, the talk of the morning is not about an impressive win but the drunken moron who put on Adam Pardy's helmet.  I hope this idiot, and his dopey girlfriend who dumped her beer on Pardy, got to dry out in a cell last night. I would have had zero problem if Pardy reached up and smacked this goof.  Good thing Rocky raised the prices to get more a "family atmosphere" in the building.  The whole incident could have been avoided had Anthony Peluso had not acted like a turd after a clean hit from Brandon Bollig.  You have a pane of glass and players hanging over the boards and in the crowd. so there was no need to make matters worse by causing a scrum in the front row. 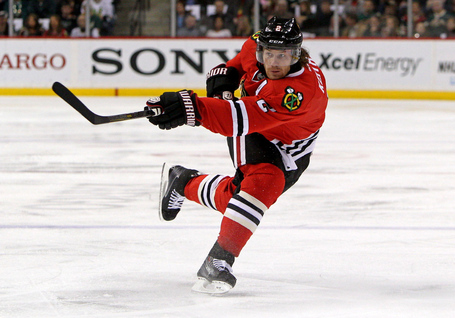 Duncan Keith added two more assists last night to raise his season total to 12.  He could have had a third assist because it was his pressure on Blake Wheeler that led to Patrick Sharp's goal.  He was a +3 on the night with 22:18 of ice time.  His 12 points has him tied with Marian Hossa for second on the team.  If he keeps racking up the points he could get nominated for another Norris Trophy because that's what wins the Norris these days, right?