The Blackhawks score four unanswered goals to earn two points in their first meeting with the Stars.

The Blackhawks overcame way too many penalties and some sloppy moments to force their will on the Stars for a 5-2 win in "Big D." The Hawks. once again, proved that even on off nights they can get brutalize teams who give them the chances to do so.

The Blackhawks started the night by taking two minor penalties within the first 4:08 of the game; a high stick by Brandon Saad and an trip from Niklas Hjalmarsson. The Stars would score just after the Hjalmarsson penalty ended. The play was aided by a nice play from Trevor Daley to kick the puck to his stick and Michal Rozsival getting caught too far away from his net. Cody Eakin was able to locate the puck during a goal mouth scum and stuff it past Corey Crawford for his fifth goal of the year. The Hawks only had four shots on goal through the first 15 minutes of the period but got six in the final five minutes including one that went into the net. Jonathan Toews found Marian Hossa, from the behind the Stars' net, for the easy tip in past Kari Lethonen. Patrick Sharp picked up the secondary assist on Hossa's seventh goal of the year. Anytime you can end a road period tied in which you took three minor penalties you have to be considered fortuate.

Tyler Seguin gave the Stars the lead back 6:54 into the 2nd period. Seguin was given a ton of space due to everyone being drawn to Jamie Benn and sniped a laser, top corner, over Crawford for his seventh goal in Dallas. I would much rather have him score goals against the Hawks for Dallas in November than for Boston last June. The Blackhawks would get some help from Eric Cole's skate to tie the game. Patrick Sharp beat two Stars to the puck and got it to Patrick Kane who made a backhand pass to Toews. The captain put the puck on the net and Cole would accidently direct the rebound back into the net with his skate while skating hard to the crease. There was no accident when the Hawks took the lead on a Kane power play goal at 18:15. Sharp made a cross ice pass that was settled down by Andrew Shaw and quickly moved along to Kaner who blasted a one timer for his 10 goal of the year. Shaw nearly assisted Kane for a second time in the closing seconds of the period. He made a great stretch pass to spring Kaner on a breakaway but Kari Lehtonen made a huge pad save to keep it a one goal game.

It looked like the Hawks 3-2 lead was going stand pat for final 20 minutes but the boys in white would add two more late goals to run and hide.  Sharp won yet another one on one battle that led to a goal for his team.  This time he won a stick battle along the boards with Stephane Robidas and chipped the puck ahead to Marian Hossa who beat Lehtonen stick side for his second tally of the night.  Johnny Oduya was credited with the secondary assist.  Niklas Hjalmarsson would score the Hawks first shorthanded goal by flicked the puck from behind his own goal line all the way down into the empty Dallas net.

The Blackhawks have a quick turn around with a home game against the terrible Edmonton Oilers Sunday night.  Let's hope we don't have a let down like we did last Sunday against Calgary.

* Corey Crawford had an adventurous night.  He tried really hard to give the game away with some questionable puck handling in the 3rd period.  He made up for his gaffes by robbing Tyler Seguin with just over seven minutes to go in the game.  Crow made 31 saves including eight while the Hawks were shorthanded.  I am hoping Nikolai Khabibulin gets the start on Sunday because the road is about to get a whole lot tougher.  If Khabby can't handle the Oilers than it might be time to look elsewhere.

* So the top line of Sharp-Toews-Hossa is quite the thing.  I have no idea how an opposing coach can even try and defend it.

* The Blackhawks no longer have the worst penalty kill  in the NHL after killing all six penalties Saturday night.  You should lose every game in which you take six minor penalties so they were very lucky they did against a team that now has no goals in 24 power play chances at home.  Please do not make a habit of this.

* Just in case you need another reason to hate the Boston Bruins you can throw in trading Tyler Seguin to our division.  Seguin and Jamie Benn are a fantastic combo.  Jim Nill has a solid foundation to build around.  If he can solidify his blue line and figure out a way to keep Kari Lehtonen on the ice, the Stars are going to be a pain in the ass within the Central Division for years to come.

* If Jeremy Morin is not the answer send him back to Rockford and bring someone else up for their shot. Playing Sheldon Brookbank less than six minutes at forward does absolutely nothing for this team. Just stop! I don't like watching Patrick Kane double shifting with the 3rd line during the first half of a set of back to back games in the second week of November. It is counter productive.  Morin has looked better than both Brandon Bollig and Ben Smith.  What exactly is the issue here?

* The Stars had 17 giveaways versus just four for the Blackhawks.  Teams that love to giveaway the puck in the neutral zone will get buried by the Blackhawks most of the nights. 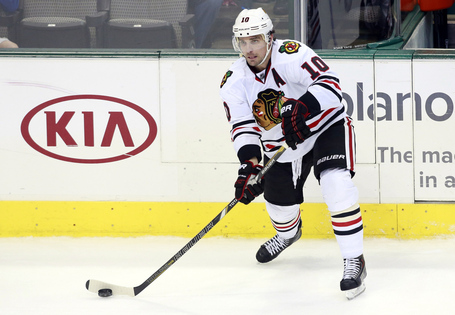 The Blackhawks do not win this game without Patrick Sharp. Period. End of sentence.