The Blackhawks steam roll the Stars for their sixth straight win in Dallas.

Share All sharing options for: Blackhawks Win Again In Dallas

Just like last week's game at the United Center, the road team would open up the scoring in the 1st period. At 2:03, Michael Kostka would score on his first shot, during his first shift in over seven weeks. Marcus Kruger brought the puck down to the bottom of the right circle and passed it back where Kostka got a one timer through traffic and just past Kari Lehtonen.  It was not ruled a goal on the ice but after a review in Toronto the puck was ruled to have completely crossed the goal line.  Ben Smith got the apple on Kostka's second goal of the season.  The Hawks would get a a couple of power plays, including a two man advantage for 1:55 but could not extend their lead.  Just over 10 minutes later Brent Seabrook would make a nice pass to spring Patrick Kane past everyone who went forehand/backhand to beat Lehtonen for his 17 goal of the season.

Jonathan Toews gave Hawks fans a scare by coming out late and missing his first shift of the 2nd period.  He returned to the bench just in time to see Brandon Saad's 10th goal at 2:46. The Manchild started the play by stripping Jamie Benn of the puck and getting it across to Jeremy Morin.  The Stars were caught standing around as Saad got to the front of the net to put the rebound from a Michael Kostka shot into the net.  Patrick Sharp would increase the lead, and chase Lehtonen from the game, with a power play goal at 8:20. Sharpie ripped a shot with the point with Andrew Shaw providing a screen (funny, I feel like I have typed that before!). Patrick Kane and Duncan Keith assisted on Sharp's 13th goal of the year.  Shooter would add number 14 just three and a half minutes later as he got in all alone and beat new goaltender Dan Ellis with his backhand.  Antoine Roussel took time away from elbowing people in the skull to score a rather soft goal to get the Stars on the board.  Saad would get credited for his second goal of the period with just 45 seconds left.  Ellis made the initial save on Saad but then appeared to throw the puck into his own net just because.

The 3rd period nearly went scoreless until Roussel would score another goal with just 19 seconds left to make it a 6-2.  The Hawks would spend six minutes shorthanded in the period but were able to keep the puck out of the net.

* Antti Raanta had his best professional game Tuesday night.  He wasn't challenged much in the first half of the game but came up with a few big saves in the second half.  The Blackhawks' defense did a great job keeping Raanta free of rubber but eased up a bit after opening a five goal lead.  You can't kill off five penalties without the goalie coming up big.  Raanta did a great job seeing the puck through traffic.  He is improving with every outing which is good because he is going to be a busy man in the next three weeks.  Corey Crawford's groin injury is the best thing to happen to Raanta's career developement.

* Don't look now but the Hawks' PK unit is 11 for 11 in the last two games.  They have been aided by skating against two absolute dreadful power plays but the confidence has to be growing and that's all that matters.

* Antoine Roussel; what a fake tough guy! He has proven that he will turtle when someone challenges him face to face. He would much rather do his dirty work when people aren't looking.  And of course he can't take a taste of his own medicne, just like any other school yard bully. His act will get old and somebody is going to smash him into the next week.  My problem with guys like Roussel is thatthe NHL waiting for him to injure someone before punishing him.  There is a ton of video evidence of him targeting the heads of his opponents, and a lot of them are not even being called for penalties on the ice.  The refs need to be more aware and need to start calling every single elbow to a skull as a penalty.  Make targeting the head a five minute major penalty, and after a player gets three he is suspended for two games.  After five, five games and so on.  Why wait unit someone is carted off on a stretcher before dishing out some justice? I never want to see anyone get injured on the ice, but I will have no sympathy for Roussel when he gets his.

* Marcus Kruger has 10 assists and has played the entire season with Brandon Bollig as his left winger.

* The Blackhawks need to practice the 5 on 3.  They need to get the penalty killers moving east to west to create shooting lanes. Everyone is expecting the backdoor play to Sharpie; time to go back to the drawing board.

* Something is wrong with Jonathan Toews.  He came out late for the 2nd period and only took 11 faceoffs.  This leads me to believe to there is something wrong with his wrist and/or hand.

* Jeremy Morin is not doing himself any favors by taking two penalties in the 3rd period.  We all know he will be going back to Rockford when Bryan Bickell returns but at least make it a hard decision.  He earned himself some brownie points by going after Roussel at the end of the game.

* Brandon Saad is going to be the next Marian Hossa and all you have to do is watch his first goal for all the evidence that supports this.

* During the second intermission it was decided between myself, Jen and Schatzi Page on Twitter that Andrew Shaw will be known as the Hockey Monkey.  My hockey brain tells me not to like him but he has won over my Blackhawks heart. Feel free to send in your photoshop submissions for the official Hockey Monkey avitar. 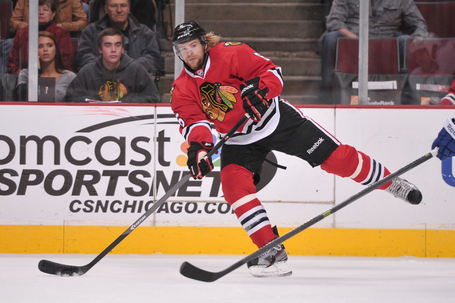 I know Saad and Sharp had two goals each but Michael Kostka set the tone early.  Hell, the way he played you might see him as a 3rd line winger tomorrow night.  There is no doubt he deserves ice time and it will be interesting to see how Q handles this situation.