The Hawks explode for five 2nd period goals and turn Wednesday's game into a laugher.

The Blackhawks rolled four lines and steamrolled over the Flyers on Wednesday night.  Their 7-2 beating could have been even uglier had they showed up for the 1st period.  The Hawks hit the on switch during the first intermission and pulled away with another easy win.

It was no secret that the Flyers were out to set a physical tone early in Wednesday's game.  Wayne Simmonds and Sheldon Brookbank dropped the gloves just 1:47 into the game after Simmonds delivered a big hit on Duncan Keith.  I will never understand the need to fight after a perfectly clean hit but I will trade Brookbank for Simmonds every time. The Flyers would take advantage of a lazy holding the stick penalty on Marcus Kruger.  Shortly after the call, Jakub Voracek put a wrist shot through the traffic in front and past Antti Raanta for his 5th goal of the year. The Flyers would get another power play after Claude Giroux sold a stick to the chest to draw a high sticking penalty on Brandon Bollig, but the Hawks were able to kill it off.  The Blackhawks were very sluggish in the opening period and only got six shots on goal.

After giving the Flyers a 20 minute head start they came out in the 2nd period and waived their collective wang at Philadelphia.  The Hockey Monkey would announce his presence with authority in the first two minutes of the middle frame.  The Hawks started the period on the power play and used their successful recipe of a shot from the point with Andrew Shaw providing a screen in front.  This time it was Duncan Keith with the shot, his second goal of the year, with Patrick Sharp and Patrick Kane assisting.  Shaw would give the Hawks a lead just 39 seconds later as he put the puck past Ray Emery with a nice wrap around shot from behind the net.  Brandon Bollig and Johnny Oduya assisted on the Hockey Monkey's 10th goal of the year.

The Hawks would add a shorthanded goal at 5:27 when Michal Handzus would convert on the slowest 2 on 1 in the history of the world.  Handzus kicked the puck but the replayed showed he nicked it with his stick just before going in the net.  Marcus Kruger picked up the only assist on the play.  The Flyers would answer, on the same power play, as Steve Downie tipped the puck into the during a scrum in front of the net.  Kris Versteeg would increase the lead to 4-2 after he was left all alone in front of the net while everyone wearing white was watching the puck behind the net.  Brandon Saad and Marian Hossa were given credit for the assists on Steeger's fifth tally of the season.  Jonathan Toews would cap off the five goal period by having a Patrick Sharp shot hit off of him and go into the net at 14:15.  Hossa would get another assist on the captain's 13th of the year.

The 3rd period was more of the same as Brent Seabrook joined the party with his 3rd goal of the year just 65 seconds in. Kris Versteeg played catch with Michal Handzus who fed Seabrook for a one timer missile from the point.  The Hawk's sixth goal chased Emery from the net.  Patrick Sharp finished of the scoring with his 15th goal of the year off the famous 5 on 3 back door play. Kane and Hossa assisted on the Hawks' seventh goal of the night.

* As long as the Hawks are going to keep scoring at least six goals a night, Antti Raanta has the easiest job in the world.  Raanta is getting better with every passing game.  He made a few big saves in the 1st period to keep the game close.  He also came up with two huge saves on breakaways while the Hawks coasted through a 3rd period power play.

* It's been quite obvious that Jonathan Toews hasn't been 100%.  It looks like it is a finger injury that has been hampering him.  Mark Lazerus Tweeted that he had his pinky and ring fingers on his left hand taped/splinted together.  This will explain why Toews has not been taking all of his faceoffs.  That is much better news than a shoulder or wrist issue.

* Ray Emery is proof that the team in front of a goalie could make or break him in any given year.  Razor was terrific in Chicago the last two years with a great defense in front of him.  With the out of control tire fire that is the Flyers in front of him this year, his numbers are way down.  Nobody should be surprised by this.

* The entire Rockford IceHogs team was at the game Wednesday night, which means Brandon Pirri made his final visit to the United Center this season.

* The penalty kill was back to sucking after going a perfect a 11 for 11 in the last two games.  You can get away with a bad PK when you score seven goals but this is a real concern.  If this continues into the spring it can cost us another special summer in Chicago.

* The Flyers are another team, much like the Blues, that are always full of pudwhacks and this year's sqaud is no different.  But Schenn brothers hit Blackhawks up high, including a cross check to the back of the head of Versteeg.  Scott Hartnell is a turd with his antics.  Jay Rosehill is another waste of a pair of hockey skates.  Everyday that Paul Holmgrem is still employed is another day in the stone age for Philadelphia hockey.

* This week is the first time the Blackhawks have scored at least six goals in three straight games since did scored six in consecutive games against the Capitals, Whalers and Canucks in January of 1993.  That team scored at least five goals 22 times in 92-93, this year's team has done it 14 times in 34 games already.
Players of the Game 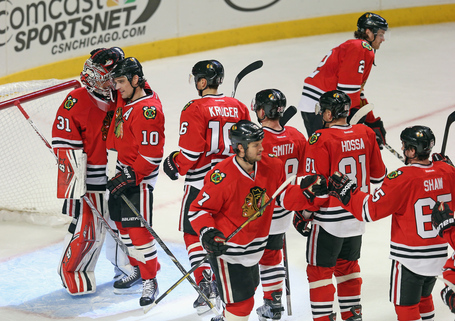 Going to split this up between the trifecta of former Flyers who each stuck in their former team's moon.  Patrick Sharp had a goal and two assists and Kris Versteeg and Michal Handzus each had a goal and an assist.  Versteeg will play all three of his former teams this week after the Hawks stop in Toronto on Saturday.
Blackhawks Corsi Numbers
Flyers Corsi Numbers