Blackhawks Rebound With A Win Over The Kings.

The Blackhawks score three times in the first period to beat the Kings 3-1.

Share All sharing options for: Blackhawks Rebound With A Win Over The Kings.

So just in case you forgot after Saturday night's debacle in Toronto, the Blackhawks are scary good.  The Kings have been beating everybody on their six game road trip, but the Blackhawks didn't care and showed them and the rest of the NHL that they are still the class of the league.

The Kings had gone 18 games without giving up a first period goal but the Blackhawks had three answers for that, with the first coming at 5:45.  The Hawks would open the scoring with Johnny Oduya in the box for tripping.  Jonathan Toews beat Jake Muzzin to the puck behind the LA net and got it out front to Marian Hossa, who beat Anze Kopitar to the point of attack and scored on Ben Scrivens. Niklas Hjalmarsson was given credit for the secondary assist on Hossa's 14th goal of the year.  The "comfortable" Kris Versteeg doubled the Hawks lead when he scored on a 2 on 1 at the 9:59 by using a nice toe drag move and Michal Handzus as a decoy.  Patrick Kane and Brent Seabrook assisted on Versteeg's sixth goal of the year and fourth with the Blackhawks.  The Hawks would get a late power play thanks to a Jarret Stoll cross check and would use it to pour salt in the Kings' wounds.  Patrick Sharp would continue his great success agaisnt the Kings with his 16th goal at 19:31.  Jonathan Toews made a great pass from the top of the left circle to Sharp at the top the right circle, who unleashed a wicked wrist shot into the net.  Duncan Keith picked up his 28th assist of the year on the play.

The 2nd period did not see any goals but both teams had their chances.  The Kings seemed to gain control of the game during the first have of the period, but the Hawks and Antti Raanta had all the answers.  The Blackhawks were able to regain some of the momentum after a great shift by the 4th line about half way throught the period.

Alex Martinez got the Kings on the board 16:06 into the 3rd period by getting a wrist shot through a ton of traffic and past as screened Raanta.  The best thing for the Hawks, after the horrible outing on Saturday, was to get right back on the ice.  They did exactly what great teams do and bounce back from a bad night with a solid all around performance. 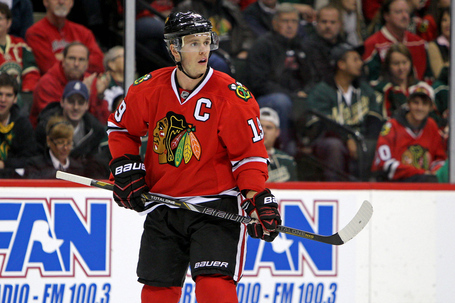 Jonathan Toews set up two of the three Blackhawks' goals with great passes. He lifted Jake Muzzin's stick and quickly got to puck to Marian Hossa.  Later, he made a sick cross ice pass for Sharpie's power play goal.  He was a beast all over the ice tonight.  He finished the night with five shots on goal, five takeaways and he won 10 of his 13 faceoffs.  This makes me think that his hand injury has healed which to quote the late, great Road Warrior Hawk; "good for us, bad for you."

* Can't say enough about the way Annti Raanta bounced back tonight.  It isn't a coincidence that Raanta had his best game of the year when the team in front of him played great defense.  The Hawks played horrible team defense on Saturday and Raanta could not bail them out.

* The penalty kill was pretty good tonight limited the Kings to just four shots in their three attempts and scored a short handed goal.  There best job was late in the 3rd period right after the Kings scored their first goal, but the Hawks did not allow the Kings to even get a shot on goal.

* Speaking of that last Kings' power play, they had the man advantage due to an Andrew Shaw unsportsmanlike conduct penalty.  The replay didn't show anything physical occurring so he must of gotten the penalty for saying something unpleasant.  Earlier in the 3rd period, Shaw was hit in the head by a deliberate elbow from Matt Greene, but no call was made.  So, elbowing guys in the head is ok but calling him a bad word gets you in the box. Player safety begins on the ice and the men in strips need to make the obvious calls.  If the players don't want to respect each other, the officials need to take control of the game.  There is no way that elbow from Greene should have went uncalled.  If the NHL wants to get serious about protecting their players perhaps they should start handing out fines to the refs who miss obvious calls.