Blackhawks Cough One Up To The Canucks

The better late than never recap of the Blackhawks 3-2 shootout loss to the Canucks.

Share All sharing options for: Blackhawks Cough One Up To The Canucks

First off, I want to thank you all for your patience with the network wide technical difficulties we have been experiencing the last couple of days.  The SB Nation tech team worked around the clock to get everything back to normal and ensure us these problems will not happen again. Now, on to hockey.....

Friday night started off just fine for the Blackhawks as they took on their bitter rivals from the Great Northwest. For the first 15 minutes of the game the Hawks looked like the far superior team and the Canucks looked like a team who was in the second half of back to back games. Once the Canucks gained their legs, the two teams swapped positions with Vancouver looking fresh and the Blackhawks looking slow and sluggish.

The Blackhawks spent much of the first five minutes of play in the Vancouver zone. They had quite a few extended shifts in the offensive end with the help of some great puck movement. The Hawks would open the scoring at 7:49 of the opening period with a Kris Versteeg goal off of a deflection. Versteeg started the play by firing a backhand shot off the shoulder of Canucks' goaltender Eddie Lack. Michal Handzus got the puck from behind the net and got it over to Patrick Kane who fired a shot from the slot. Both Handzus and Versteeg were in front of the net to provide a screen. The puck hit off of Versteeg and just trickled past Lack, who had no idea where the puck was. The Hawks held a 1-0 lead and a 10-3 advantage in shots after the 1st period, but things were about to change.

The Canucks came out firing in the 2nd period, in fact they had five shots in the first minute of the period after only three in the entire opening frame. Antti Raanta and Hawks were able to withstand the Canucks initial push and actually doubled their lead at the 4:57 mark. Patrick Kane skated around the Vancouver zone and found Michal Rozsival on a nice cross ice feed. Lack made the save on Rozsival's shot but no one on the Canucks bothered to put a body on Kane, who was wide open and easily put the rebound back into the net. Johnny Oduya got the secondary assist on Kaner's 21st goal of the season. Vancouver meathead Zack Kassian got the Nucks on the board at 8:19. The Blackhawks were starting to get sloppy in the defensive and neutral zones and it came back to haunt him. Kassian gained the offensive zone off a center ice turnover and used Brent Seabrook as a screen to fire a wrist shot past Raanta for his seventh goal of the year.

Daniel Sedin tied the game up at 10:48 of the 3rd period with a goal not many players could have pulled off.  Kevin Bieska's shot from the point didn't make it to the net but the puck found Sedin at the bottom of the right circle.  He was able to kick the puck to his stick and then get a shot up and over a sprawling Raanta, all while falling forward.  For as much crap as I give the Sedins, that was a world class play made by a great hockey player.  The game would go into overtime and eventually a shootout after each team was only able to fire off one shot in the extra five minutes of four on four hockey.  Raanta gave up a goal to the first Vancouver shooter, Mike Santorelli, but then made six straight saves before giving up the game winning goal to Ryan Kesler.  Patrick Sharp was the only Blackhawk shooter to get one past Eddie Lack.

* The Blackhawks had their holiday party Thursday night and it looked like quite a few players had a bit too much egg nog.  Marian Hossa looked a step slow most of the night.  Jonathan Toews wasn't quite right either.  Not saying they were bad, but they were just a tad off their usually pace.  The top defensive pairing of Duncan Keith and Brent Seabrook were bad.  A lot of us are worried about the amount of Hawks heading to Sochi in Febuary, but Seabrook has played himself into a nice two week winter break.

* The penalty kill had themselves a nice night, which is slowly but surely starting to become a trend.  They gave up seven shots during the four Canucks power plays, but they did not give up too many second chances.  Any time there was a rebound or a loose puck in front of the net, there were multiple Hawks' sticks there to clean up the mess.

* On the flipside, the power play let the team down on Friday night.  They were do for a clunker after scoring in ten straight games but last night was the worst time for it.  The Canucks have the best penalty kill in the NHL right now and they showed why, limiting the high powered Hawks attack to just two shots on goal in their four chances.

* The Daniel Sedin game tying goal was a complete mess.  First off, the fourth line was out against the Sedin line which is just plain stupid.  Then Johnny Oduya decided to go to the other end of the ice leaving Donk all alone at the side of the net. Again, a very stupid idea.  You've got to know your defensive responsibilities in the third period of one goal games.  The fact Raanta almost made the save was stunning.

* This is not a "Michal Handzus sucks" rant because I don't think he is a bad player, in fact he has a role on this team; it just isn't on the 2nd line.  You don't get the full effect of what a bad fit he is with Kirs Versteeg and Patrick Kane until you sit up high at the United Center and watch it in person.  I think it is time for Marcus Kruger to get the call for his shot at the 2nd line center.  He has the speed to keep up with 23 & 88.  He has the defensive responsibility Q is always looking for.  The biggest improvement in Frogger's game this year is at the dot.  He is now at 56.8% at the year, just 0.1% behind Toews for the team lead.  Swap Frogger and Zus for a few games and I bet you don't regret it. 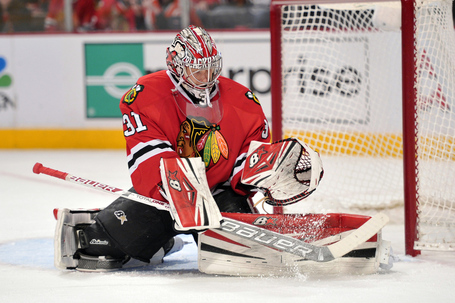 Raanta Claus was very good again on Friday night.  He didn't get tested too much early, but did come up with a big save on a Chris Higgins breakaway in the 1st period.  I originally Tweeted that it was a soft goal because it looked pretty weak in person. After seeing the replay and the change of direction and screen provide by a lumbering Brent Seabrook I retract my original statement.  He looked much better in the shootout than his first time out against the Ducks.  That is the most important thing with a young goaltender is seeing improvement on a nightly basis and that has what we have been shown. It's too bad his team couldn't bail him out with one more goal since he did everything in his power to bail them out.