Blackhawks Roll Over The Devils

The Blackhawks head into their Christmas break with a dominating 5-2 win over New Jersey.

Share All sharing options for: Blackhawks Roll Over The Devils

When you looked at this matchup on paper today you figured Monday night would be an easy win for the Hawks. Well, every once in awhile what you see on paper is exactly what you get on the ice.  The Hawks dominated the play for most of the night and rolled to a 5-2 win.  The Blackhawks will know enjoy their Christmas break with some well needed rest as the Avalanche, Blues and Kings await them after the holiday.

There are some nights when teams from opposite conferences play each other that it is tough for the players to get up for the game.  Monday was one of those nights.  The game between the Blackhawks and Devils got off to a very slow and uninteresting start.  The teams combined for just four shots on goal in the first 10 minutes of the game, which included a power play for the Hawks.  The Blackhawks started to pick up some steam as the period progressed and they opened the scoring at 12:59.  Jonathan Toews stripped Patrick Elias of the puck at center ice and got the puck to Marian Hossa.  Once he drew in two defenders to the slot, Hossa passed back to Patrick Sharp who flipped an easy little wrist shot towards the net.  Mark Fayne pulled a Johnny Oduya and tried to glove the puck but instead he deflected it past Cory Schneider for Sharp's 17th goal of the season.

The Devils would tie up the game with just their fourth shot on goal at 5:37 of the 2nd period. Jonathon Merrill's shot from the point hit off of Cam Janssen's stick, then Michael Kostka's skate and finally Stephen Gionta's stick before getting past Antti Raanta.  Marek Zidlicky had a nightmare shift about two minutes later.  First he was knocked off the puck by Kris Versteeg in the corner.  Then he was beaten to the rebound off a Nick Leddy shot by Patrick Kane who scored his 22nd goal of the year.  Bryan Bickell added on to the Hawks lead at 12:27 with a sick wrist shot snipe over the glove hand of Schneider.  Brandon Saad and Duncan Keith assisted on Bickell's sixth goal of the year.

Michael Ryder cut the Hawks' lead in half with his 11th goal of the year just 59 seconds into the 3rd period.  Ryder was able to jump on a loose puck and get a quick backhand shot through the traffic in front and past Raanta.  Patrick Sharp would give the Hawks their two goal cushion back about five minutes later by converting on a breakaway set up by a great pass from Marian Hossa.  Brent Seabrook picked up his 22nd assist of the year on the play as well.  The Hawks would increase their lead to 5-2 with a power play goal at 12:59.  Nick Leddy was able to walk in from the point all the way to the left faceoff dot before slamming home a slapshot.  Seabrook and Brandon Saad assisted on Leddy's fifth goal of the year.  Sharp had a shot at a hat trick as but he missed a wide open net after Schneider misplayed the puck about 20 feet away from his crease.

* The top line showed their dominance on the ice all night long.  Marian Hossa had two great assists to set up both of Patrick Sharp's goals.  Jonathan Toews had an assist and won 17 of his 22 faceoffs. I think it is safe to say the captain's hand is fully healed.  The three combined for five points, ten shots on goal and were a collective +7.

* Brandon Saad is just unreal.  He had two assists on the night but what this kid does away from the net should be illegal for a 21 year old.  The Nick Leddy power play goal is a prime example of his work.  He helped dig out the puck after the faceoff and quickly get it to Seabrook.  He then used his big frame to create the space needed for Leddy to walk in before skating hard to the net just in case there was a rebound.  Did I mention that he is only 21?

* All I know is that if Corey Crawford gave up two goals on the first nine shots Twitter would have gone stupid.  I know Antti Raanta could not have done much with either one of those goals but the Crow haters would have been out in full force.  A pretty easy night for Raanta Claus as he only had to face 12 shots.  The Devils had two less shots than what's in Nikolai Khabibulin's water bottle!
* Another solid game for Kris Versteeg as well.  He created the play that led to Patrick Kane's goal by winning a board battle with Marek Zidlicky.  His one and only faceoff win led directly to Nick Leddy's goal.  He also had three of the 11 blocked shots for the Blackhawks.  This means we will get four more "Kris Versteeg is comfortable" stories from the beats over the break.
* I am going to keep saying this until it happens which means forever, but please swap Marcus Kruger and Michal Handzus. You won't regret it Q, I promise you.
* Not breaking news; David Backes is a scumbag.
Player of the Game 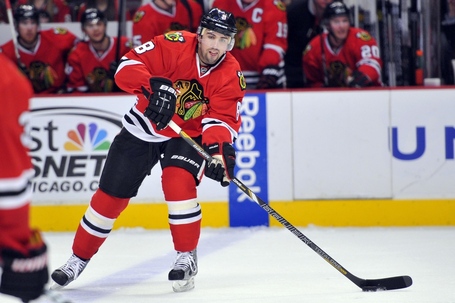 Going to give the honors to everyone's favorite mouth breather, Nick Leddy.  Yes, he had a goal and assist but he made two defensive plays that stuck out as well.  Shortly after Kaner put the Hawks up 2-1, the Hawks got caught in a bad line change but Leddy was able to recover and lift the stick of a Devils attacker to prevent a 2 on 1 chance.  Bryan Bickell would extend the Hawks lead just a few moments after this play.  He also made a nice play late in the game by batting the puck out of mid air with Zidlicky closing in fast on his goaltender.