One of the newest holiday crazes is hosting an ugly sweater party. I have been to these before and they can be a lot of fun, so I decided to host one for the Second City Hockey staff and all of our readers. So I got some party favors, sent out the invitations and pulled two of the ugliest sweaters out of my closet. 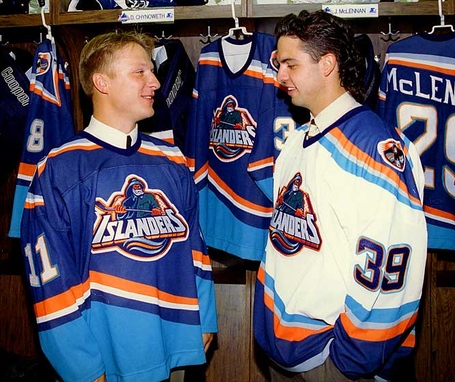 You can't have an ugly sweater party without these gems that the New York Islanders wore from 1995 to 1997. I am not sure what is worse; these jerseys or having Mike Milbury as your general manager? There are so many things wrong with these sweaters. The colors are terrible and everything is at an acute (or is it obtuse?) angle. I am not sure who thought it would be a good idea to remove a logo that represented four straight Stanley Cup wins and replace it with the spokesman for some shitty frozen seafood. Every time I see these jerseys I have flashbacks to a Chicago Public School cafeteria wondering what kind of fish smelling product was breaded, deep fried and served up with lima beans out of a can. If this jersey doesn't make you think of fish sticks, then it brings up images of Jennifer Love Hewitt running around in the rain wearing a low cut tank top. Wait, maybe these are so bad after all! 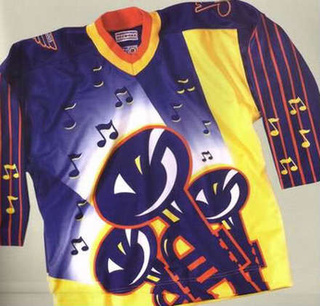 Peering through the deepest and darkest corner of my closest I unearthed this gem. There are two things that represent the failure that is the St Louis Blues; Bobby Orr flying through the air and these. This jersey would be great if the team was named the Jazz, but how does three trumpets represent the blues? I have loved listening to the blues since my dad taught me all about the greats like Muddy Waters, Howlin' Wolf and Elmore James. I can't remember a single song where John Lee Hooker blew us away will a killer trumpet solo. The biggest shame about these jerseys is that they were never worn on the ice. The greatest coaching decision made in Mike Keenan's career was when he took one look at these, in 1995, and told the Blues upper management to shove these crimes against humanity up their collective poop chutes.

As I am firing up the record player with some Bing Crosby to set the mood, the doorbell rings. Alas, my first guest has arrived and it's Stonecutter walking in with some craft beer and a couple of horrible sweaters. 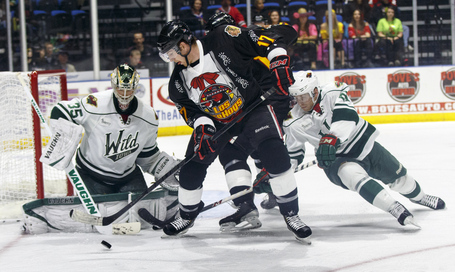 You don't have to look much farther than right down I-90 for some ugly sweaters. The second edition of "Los Ice Hogs" are as ugly as Sloth without the charm. I'm not even sure where to begin with these. Truth is they nailed the mariachi charro tuxedo, right down to the ridiculous belt buckle featuring a second logo. Still think they should of gone all out and created some custom sombrero helmets for the occasion. Possibly nacho helmets? Think of the concession stand tie in! As for the logo, why does the hog have a mustache? If hogs have mustaches, I'm not sure we should be eating them. You wouldn't eat Tom Selleck, would you? Really its the whole Los IceHogs thing that rankles me. After the first event was planned, you would think it would be time for a makeover. I get that the minors do it to get some pub, but there is a way to do things with a bit of tact, and this is not it. I honestly expect more from the entire organization. Hell, the best thing about these is the lack of number sombreros. 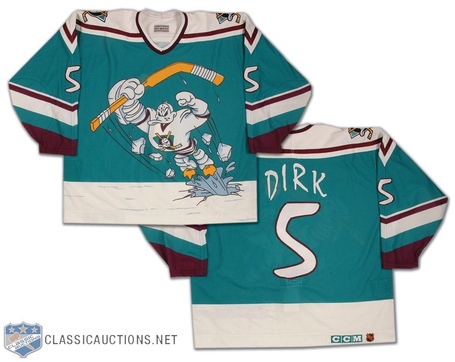 One of the worst promotional tie ins, aside from you know naming an entire franchise after a kid's movie, were these thirds. Using the mascot and character from the Disney Afternoon cartoon series unabashedly screams BUY ME! Imagine the marketing/jersey meeting that went down. Just 15 white guys in suits yelling buzz words as they tried to increase brand awareness among the youth market, gotta really get the family unit invested (totally a phrase someone said). First things first, this cartoon SUCKED. You went from Aladdin right into Darkwing Duck and then you had no choice but to watch this piece of crap before Duck Tales started. Like this jersey, the show only lasted one putrid season. Now look at that jersey, look at it. There is not one redeemable quality to it. It has some sort of Inception inspired crest where the logo is actually wearing a sweater featuring a different logo. Wildwing is breaking through the ice, which means that isn't a white stripe at the bottom, it's the horizon line. THIS JERSEY IS A LANDSCAPE. That's some Bob Ross shit right there. You flip to the back and you can see they straight up copied the font from when I try to sign my bar tab at 4 a.m. This sweater is the complete opposite of everything that was "all that and a bag of chips" in the 90s.

As Stonecutter and I are enjoying a good brew the doorbell rings and my second guest JenLC has arrived. Apparently she misunderstood my request for a tastey pie for dessert but she has brought with her some pie charts showing the qualtiy of opponent and defensive zone starts, but that is why we love her! She didn't fail in the ugly sweater department, that is for sure. 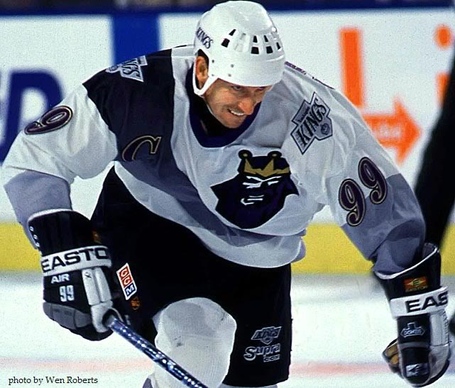 Wayne Gretzky could make pretty much anything in hockey look good but even he could not help the third jerseys worn by the LA Kings for one horrifyingly fashion depressed season. While we can all applaud the designer's good intentions in using the purple and gold, the result was more "oh hey, I found this material and thread at my grandma's garage sale."

The details of italicized font, gold threading and complete mismatching aside, this sweater is particularly gruesome due to the crazy swooping black to silver accents that make it look more like something a performer in Cirque du Soleil would wear. Even without the final piece of this disaster, this sweater is someone's totally hip 90s fashion dream gone horribly wrong. Assaulting the eyes of hockey fans everywhere wasn't enough for the Kings though. Nothing short of haunting our dreams would do for this organization.

In order to be the best of the best in the "Dear Lord that's awful!" jersey competition, the Kings logo was shelved and an ode to fatty cheeseburgers and subpar French fries was put in its place. The King featured over the wearer's heart on this sweater looks shockingly like the "Burger King" that the fast food franchise used. Seeing that thing more than once has been scientifically proven to give the viewer night terrors. Don't look upon it for too long friends. 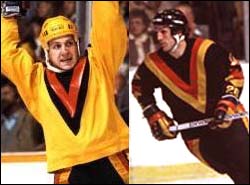 I was born in the 70s. As a result, I was dressed in ridiculous clothing for most of my childhood. While my parents cruelly allowed me to get a Flock of Seagulls style hair cut in the 80s, they took some pity on me and didn't make me wear anything nearly as classically vomit worthy as the sweaters the Canucks wore in the 70s and 80s.

Seeing these now is a major shock to the senses. Those born in the late 80s and after simply don't understand how these were ever a good idea. Those of us who lived through this era of fashion become afflicted with something akin to PTSD upon seeing these.

These horrid pieces of fabric are the epitome of every blanket your mother or grandmother crocheted in the 70s. Think I'm exaggerating? Here's a picture of a blanket my mother crocheted (yes, I still have it). 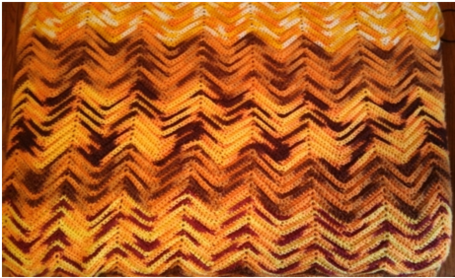 As the three of are trying to find the elf on the shelf, the doorbell rings again and in comes Mike Shoro, all the way from Nebraska, with a 30 pack of Natural Light and some ramen noodles because what else would a college kid have? What Mike lacked in quality of beer, he more than made up for with the ugliness of his sweaters. 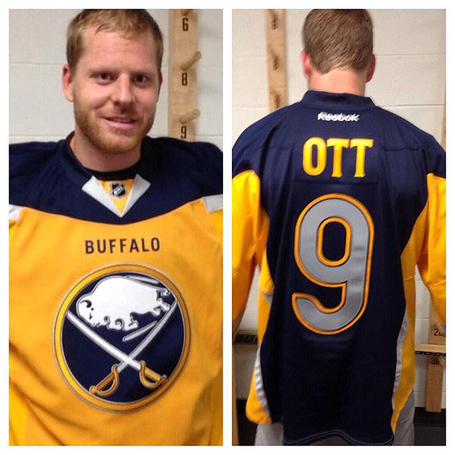 I was hoping to spend a lot of time making fun of these, but looking at these masterpieces has taken several years off my life so I'll make this quick. The word "Buffalo" in really small font above the crest and below the lapel is dumb and bad. Rarely does writing on the front of a hockey jersey work and it certainly doesn't work when there's a logo right underneath it. The word "Buffalo" over the buffalo logo is a great lesson in semiotics for the younger fans, who will eventually learn to associate the word and the logo with pain and suffering. The silver arm racing stripe was probably put there to stylistically separate the blue from the piss yellow but all it does is make me want to run far, far way. There are like eight different hues of yellow. That really isn't going to work too often in any design but when you sandwich piss yellow on the arms and sides with Dijon mustard on the front of the torso, you're practically asking to be made fun of. Granted, if there's one thing the Sabres are good at, it's making it easy to make fun of them. YOU HAVE STEVE OTT AS YOUR CAPTAIN AND THAT'S ONLY BECAUSE YOU TRADED YOUR OTHER CAPTAIN AWAY. Moving on to the back. The silver font on the numbers is atrocious, not to mention the number font itself. When viewing the navy blue shoulder/arm thing, it doesn't look all that great. But at least it's only on the shoulder and that should at least make it consistent all the way around. Nope. The blue continues all the way down the back to the end of the jersey. I am speechless. I am without speech. One more thing fun factoid about the jersey, it has the word "EXCELLENCE" written on the inside of the collar. I mean, that's just too perfect to be true but it really is there. 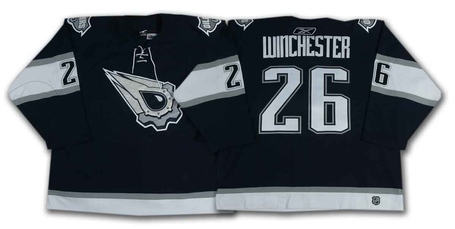 If there's one thing I can say about these jerseys is that they sure did exist. First of all, black isn't in Edmonton's color scheme. This feels like it's just black for black's sake (BFBS, a big no-no IMO). The solid black with the silver arm stripes sandwiching the white arm bands aren't , but jersey as a whole looks like the old Los Angeles Kings jerseys from the 1990s. The number and letter font itself isn't too bad in the contexts of the design, but the shoulder patches look pretty dumb. The word "Oilers" with a reprise of the hideous gear logo in nothing but grey and deep blue is just terrible. Speaking of the logo, it is easily the worst thing about the jerseys. Straight-up ripping-off the 90s Kings color scheme and striping aside, no jersey would look good with this logo. It's like an upside-down ice cream cone or an asteroid. That's either delicious or terrifying. I can't both enjoy a frozen treat and flee from certain death. It's just not feasible, especially not in today's economy.

The sweater party is just getting started and will be open all night. Feel free grab a beverage, your favorite ugly sweater and join us!