The Blackhawks steamroll the Avs right out of the United Center with a 7-2 beat down.

Share All sharing options for: Blackhawks Remind Avs Of The Central Pecking Order

***Shout out to our friends at Hockee Night for coming up with the Red Wedding nickname.

The worst thing that has happened to the Colorado Avalanche this year was November 1st; the day they came crashing back to real life.  Watching Friday night's game only solidified the fact that Colorado should have drafted Seth Jones last summer.  The Avs had a nice start to the year, but the the Hawks reminded them that they still have a long way to go.

Friday was a strange night in the NHL that started with John Scott scoring a goal in Toronto.  The weirdness carried over to the start of the Hawks game that saw Jonathan Toews miss a wide open net and Niklas Hjalmarsson showing some offensive moves that would make Bobby Orr proud.  Just over 12 minutes into the game, Duncan Keith made a great pass to Patrick Sharp at the blue line while both teams were changing lines.  Sharp used his wheels to beat Jan Hejda and fire a wrist shot past J.S. Giguere. Brent Seabrook got credit for the apple on Sharp's 19th goal of the season.  Marian Hossa happened at 18:03 to give the Hawks a 2-0 lead. Hoss checked P.A. Parenteau off the puck in the corner, grabbed the puck and drove hard to the net. Jonathan Toews followed his path to the net and cleaned up Hossa's mess to score his 14th goal of the season.  Sharpie would add his second goal of the period with a power play at 19:18 with help from a #HockeyMonkey screen in front.

The 2nd period started with a bang and a Hat Trick Sharp just 27 seconds into the action.  Sharp was in front of the net and was allowed to put back the rebound off of a Hjalmarsson shot by Erik Johnson (drafted ahead of Jonathan Toews by the Blues) for his 21st goal of the season.  Shooter wasn't done as he would strip Matt Duchene of the puck from behind, on a breakaway, and make a stretch pass to Toews who would beat Giguere stick side for his second goal of the game at 8:21.  Paul Stastny got the Avs on the board with a backhand goal just 46 seconds after the Toews tally to make it a 5-1 game.  Patrick Kane set a new career high by getting at least one point in 13 straight games at 13:30.  Kris Versteeg got the puck off the boards to Kaner who made a great pass across his body to find a wide open Michal Handzus at the doorstep of the Avs crease for his fourth goal of the season.  VerJesus would get his eighth goal of the year at 17:48 to give the Hawks a 7-1 lead.  Duncan Keith tried to pass to Versteeg but missed him. The puck hit off of Andre Benoit's stick and bounced right back to Steeger who quickly fired a wrist shot past Giguere.

Mr. "I Will Never Play For This Franchise Again" finally gave J.S. Giguere the hook at the start of the 3rd period and replaced him with an alleged scumbag.  Gabriel Landeskog kept his elbows in the vehicle long enough to score the only goal of the period at 7:37.

The Blackhawks will travel to St. Louis for a chance to take a nine point lead over the Blues tomorrow night. Hopefully the Hawks saved a few lamp lighters for Saturday night.

* Jonathan Toews' night got off to a rough start.  First he missed a wide open net, in the first shift of the game, after a great feed from Duncan Keith.  About six minutes later he had a terrible turnover in his own zone that led to a scoring chance for the Avs.  He would finally get off the scheid (one of my favorite words in the English language after shrubbery) by racking up two goals and tow assists.  If the captain starts doing his thing this team might not lose again until mid March.

* The east coast biased main stream media will fawn over the moves the the Bruins and the Penguins will make at the deadline but the best in season move to made this year is the Kris Versteeg trade.  Not only did Stan Bowman give up two guys that will never have a spot in Chicago but he suckered Dale Tallon into paying over half his salary for the duration of his contract.  I don't care what washed up has-been Ray Shero gives up two draft picks for it will not be a better move than what Bowman did to get VerJesus back, who is a perfect fit for this team.

* If Bradon Bollig was a mediocre hockey player he would have had two goals Friday night.  I am glad he didn't pot one because if he would have scored on the same night John Scott did, it would have started to rain frogs and we all would be in big, big trouble!

* One of the dumbest rules that was added over the summer was the "jersey tuck" rule that was actually called against Michal Rozsival with 81 seconds left in a 7-2 hockey game. Are you kidding me??? Players are getting hit in the head with no penalties called on a nightly basis but the league is going send a message to those cocky Europeans who dare tuck their jerseys in their breezers.  "Player safety" my left nut.....

* Would have been against some sort of weird hockey code to have played Jason Labarbera in the 3rd period? Everyone knows Antti Raanta will play on Saturday night so would have a litter of puppies died because he got benched in the 3rd period of a game when the Hawks had a big lead? 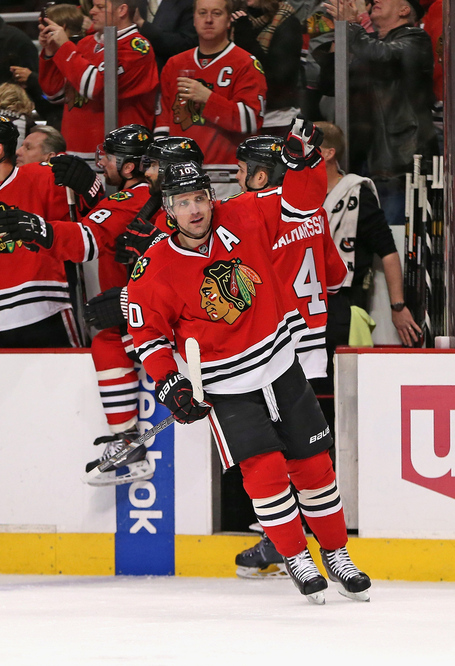 Not much you can say about Patrick Sharp tonight except can he have more than one birthday a year? I can't wait to see which overrated Easter Conference player Mike Babcock will take to Sochi over Sharpie in February.