Annti Raanta bounces back with his first career NHL shutout over the Los Angeles Kings.

Playoff hockey came a few months early this year as the last two Stanley Cup winners played one heck of a game at the United Center Monday night.  This game a little bit of everything; intensity, physical play, great defense and two young goaltenders putting on a show.  I love watching these two contrasting styles go at it on the ice, it makes for very entertaining hockey.

The Blackhawks didn't seem to have their legs for the first five plus minutes of the game but they were able to strike first at the 7:05 mark.  Andrew Shaw checked Jake Muzzin off the puck at the Hawks' blue line and Duncan Keith quickly got it into the neutral zone. Bryan Bickell jumped on it, gained the zone and tried to pass across to Brandon Saad.  The pass was slowed down by Matt Greene but then whiffed at by Mike Richards.  Saad made a great play by slowing down and dropping to one knee to gain possession then he quickly roofed the puck over Martin Jones for his 14th goal of the season.  The Kings spent most of the 1st period being the aggressors but the Blackhawks withstood the onslaught.  The Hawks PK unit came up with a big kill late in the period thanks to some great defensive plays from Jonathan Toews and Ben Smith.

Even though the 2nd period was scoreless it definitely had it's excitement.  The Blackhawks got an extended power play of 3:46 but couldn't do much, especially after the 14 second 5 on 3.  Shortly after the kill, the Kings got a power play of their own but the only excitement was generated by Jonathan Toews who missed on a shorthanded breakaway attempt.  Dustin Brown was awarded a penalty shot after he was slashed by Brent Seabrook.  The rule says a penalty shot will be awarded when the defensive player impedes the offensive player of a scoring chance.  Seabrook did slash Brown but he still got off a shot and had a scoring chance so try and figure that one out.  The ruling was a moot point because Antti Raanta came up with the stop on Brown's attempt.  The Kings got some momentum late by outshooting the Hawks 4-0 in the final two minutes of the middle frame.

The Kings seemed to have the Blackhawks on their heels after 40 minutes but the boys red played their game in the 3rd period.  Martin Jones made two nice back to back saves on Andrew Shaw, who followed up his own rebound, about five and a half minutes into the 3rd to keep it a one goal game.  If you thought the Brown penalty shot was a shaky call the refs flat out blew a call almost half way through the period.  Jonathan Toews beat the Kings defense into the zone and Jeff Carter put him in a sleeper hold that would have made "Adorable" Adrian Adonis jealous. Instead of awarding Tazer a penalty shot, Carter was given a two minute minor for holding instead.  It looked like the Hockey Monkey doubled the Hawks lead a few moments later, but the replay clearly showed him deflecting Patrick Sharp's shot with a very high stick.  The Hawks would hold the Kings to just five shots on goal in the 3rd period, preserving Annti Raanta's first career shuout and the first doughnut for the team in the 2013-14 season.  The Blackhawks will start off 2014 out east against two bad hockey teams in the Islanders and Devils and mostly likely the return of Corey Crawford.  It's not January in Chicago without a goalie controversy!

* The penalty kill was very good again tonight.  It might be safe to say that they have righted the ship with a man in the box.  It is very easy to keep an opponent's power play off the board when you only give up one shot on goal while being shorthanded for four minutes.

* On the flip side, the power play was not very good. This just proves that we are not allowed to have both sides of the special teams play working at the same time.  I really felt not scoring on the extended power play in the first period would end up costing them.  Thankfully I was proven wrong.  The zone entry after the 14 second 5 on 3 was just laughable. Not to mention they spent a few seconds with only four skaters on the ice.

* The 3rd line was great Monday night.  The combination of Saad, Shaw and Bickell is a matchup nightmare.  Saad scored the only goal of the game on a great athletic play.  Shaw was a pest all night long.  He was credited with nine hits and got three shots on goal.  He even won half of his 10 faceoffs which is a good night at the dot for 65.  This is the type of line that can be the difference between winning and losing a playoff series or two come April.

* The top defensive pairing earned their paychecks tonight.  Duncan Keith picked up his 36th assist of the season on the game's lone goal.  His biggest play of the night was when he came in from behind to disrupt a Kyle Clifford breakaway with just over five minutes to go.  Brent Seabrook had one of his better games of the year.  Both Mike Richards and Dustin Brown took runs at him only to end up on their asses.  I am getting really tired of Edzo pushing for Seabrook to make Team Canada.  He is doing more on air campaigning for Seabrook to go to Sochi than Ron Santo did to go to Cooperstown.

* Someone want to tell me why Brandon Bollig got two shifts in the final two minutes of the 3rd period of a one goal game??? He was very lucky he didn't get a boarding penalty for his hit on Drew Doughty and then he was rewarded with another shift! Stop sniffing the crazy glue, Joel.

* Brandon Faber of the Hawks media department Tweeted out that the Blackhawks played 113 games, including the playoffs, in the 2013 calendar year and only lost 21 in regulation. Wow! 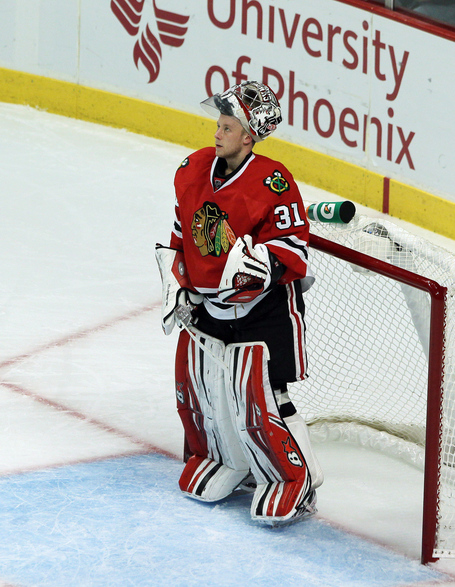 It was great to see Antti Raanta rebound from giving up five goals and blowing a late lead against the Blues on Saturday.  We shouldn't have been too surprised that he would bounce back with a strong game.  The previous time he gave up five goals to Toronto he came back to make 25 saves in a 3-1 victory over these same Kings.