Because The Internet: Top Ten Blackhawks' Internet Culture Trends of 2013

A look back at the things Blackhawks fans shared on facebook, retweeted, read, wrote, or produced online in 2013.

Share All sharing options for: Because The Internet: Top Ten Blackhawks' Internet Culture Trends of 2013

Blackhawks fans are my favorite people. I love talking to them about the team, I love seeing the Indian Head everywhere I go, and I love the all the stuff we come up with. Thanks to Al Gore we can now share and produce things that would have never been possible in the past. I thought it would be fun to take a look back at 2013 and revisit some of the top Internet memes/gifs/pictures/whatever related to our favorite team. (Forewarning: thar be a lot of links here)

YOU SEE WHAT HAPPENS, LARRY? YOU SEE WHAT HAPPENS WHEN YOU GIVE US AN OFF DAY? The #BolligLebowski hashtag spawned earlier this season during a Blackhawks travel day. With nothing else to do, it kinda mini took off. The movement was started by anti-Rex Banner, The Beverly Brewmaster when he decided it was high time for a Big Lebowski/Hockey mash up. How can you not love it when a great movie meets the greatest sport and team in the world. Some of my faves:

Smokey, this is not 'Nam. This is hockey. There are rules. #BolligLebowski

"Fuck me. I mean, say what you want about the tenets of the shootout, Dude, at least it's an ethos." #BolligLebowski

"That Indianhead really tied the room together, did it not?" "Fuckin' A" "And Beiber stood on it." "Donny, please." #BolligLebowski 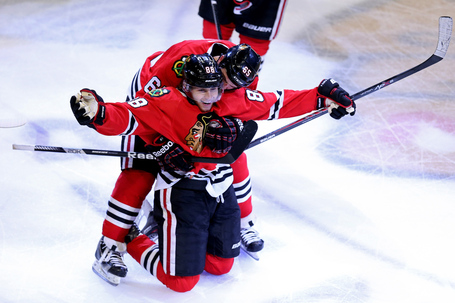 So many iconic pics from the glory of last summer. But the Kane/Shaw Titanic pic is one that will alwaaaaaays goooooo onnnnnnn. What started as two guys celebrating the WCF game 5 OT victory become something so much more. First came the Sun Times cover, then the photoshops and comics, and culminated in the drunken reenactment. Beauties. 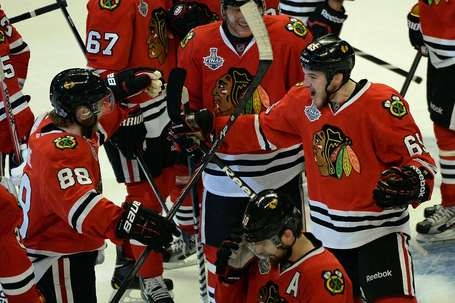 Are there three words you said after Game 1 more than I LOVE SHINPADS? I'm positive I mass texted that at least 3 times the next day. Such elation, such joy in Shaw's voice. Easily one of the best audio bits and phrases from 2013. Makes for a pretty snazzy shirt too. 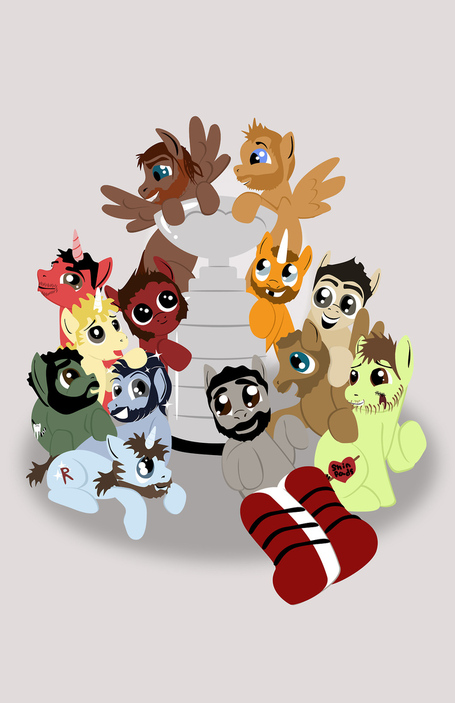 Via Ali from My Little Blackhawk

As Ali puts it, what started out as a picture of Kane in a unicorn mask became a series of drawings. My Little Blackhawk is a full fledged internet sensation. Nearly all your favorite players (as well as the scoundrels from HockeeNight) can be found in pony form. The tumblr has some of the most entertaining pics on the internet, so much so that Ali fields requests from fans of other teams that want their players ponified. Why? Because Ali is extremely talented and ponies are fly as all hell.

6. The Greatest Conference In The Land

Realignment brought about a lot of changes to the hockey world. We said goodbye to Detroit (in a wonderful fashion) and welcomed in some new foes. Then we were christened with a name fit for a king, Conference III. The awe inspiring moniker fueled one of mankind's greatest endeavors, III Communication, your go to source for everything about the III. The blog covers all teams in the Central division. It is avant garde, funny, brilliant, and as American as the Central time zone. I have a sneaky suspicion that J.R. Lind might be the smartest human on the internet.

2013 brought about the reemergence of animated GIFs, and the Blackhawks contributed some fantabulous work to the medium. Whether it was causing opponents to smash their sticks, soaring majestically, joshing with the Blues, or trolling, the Blackhawks made for some endless looping fun. Hell, there were so many good ones we had to have a no holds barred tournament to crown a Blackhawks GIF Winner. 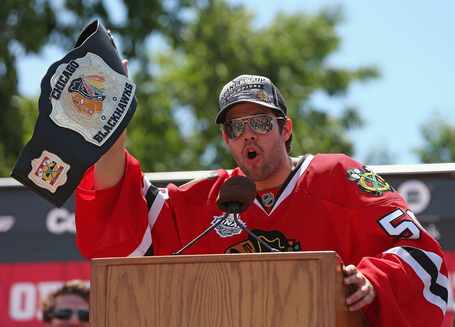 I don't think anything encapsulated the spirit of the parade more than a lubed up netminder giving his fucking teammates credit for working their fucking nuts off. Absolute beauty of a rally cry. The speech inspired GIFs, shirts (note: this shirt from The Heckler Store doesn't seem to be available anymore), a holiday themed hashtag, and was everywhere online. Hearing the Mouseketeer let loose like a sailor was the best speech of the summer, even if it hurt the young ones freaking ears.

3. Silky Mitts And A Drooling Dip 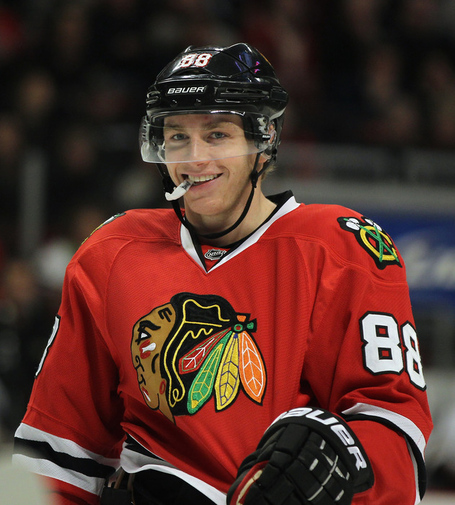 Possibly the best video pairing since Godfather I and II. We all got our minds blown apart by Kane and his borderline Satanic puck handling skills. I swear I almost threw up from motion sickness about 45 seconds in. The razzle dazzle from the best hands in hockey made for a hilarious spoof by noted fist user, Brandon Bollig. While I'm far from the man's biggest supporter, the self deprecating humor had me in stitches.

"...And there stood the world locked in a hopeless struggle. Men and women skated with no purpose, sticks were burned, pucks were melted down, the loss cutting deep lines into their souls. But then arose a savior, a beacon, a mighty Blackhawk."

Pretty cool that the Blackhawks saved the world with their insane point streak to start the year. The run sent such a buzz through the hockey world that the mainstream media had to take notice. Was it a bit dramatic by Sports Illustrated? Yes. Did we all make fun of it in appropriate fashion? Hell yes. The truth is the streak was a damn fun novelty, and one hockey team making an SI cover twice in a year is kind of a big deal. I'm happy it was the actual Blackhawks saving the universe, and not this fucking guy.

Nothing in 2013 can compare to the REVOLUTION that was Holiday Road. Not much I can say that Shoro hasn't already documented. A single tweet that bled right into the fabric of a fanbase. Absolutely incredible.

So that was the internet according to Blackhawks fans. I'm sure there was stuff I missed because of the breadth of content produced, but these are some of my faves. I love having the opportunity to cobble together sentences for you, and I love reading/watching/sharing all the awesome stuff other people do. Keep it up, Hawks fans.

Here's wishing you good health, good luck, and another parade in 2014.