The Blackhawks dig themselves out a three goal hole but drop their homecoming to the Stars 4-3.

There are two things you worry about when a team returns home after a long road trip;  being flat and trying to put on a show for the home fans.  There were flashes of both of these during Tuesday night's game but for the most part the Hawks played a decent game.  You can complain about the end result but you can't complain about the effort that produced 50 shots on goal. The Blackhawks were the better team but the Stars were the more opportunistic team and on some nights that is good enough to win.

The highly skilled Soviet Valeri Nichushkin got the scoring started with a wrist shot from the top of the right circle at 13:47.  A few moments later Andrew Shaw got the crowd into the game with a spirited fight against Antoine Roussel but the buzz wouldn't last long.  Alex Chiasson was allowed to set up shop in front of Corey Crawford and tip in a power play goal at 18:07.  Even though the Hawks held a 16-5 advantage in shots they trailed 2-0 on scoreboard after the 1st period.

The 2nd period didn't get off to the best starts either as Eric Cole would add to the Stars lead just over three minutes into the frame.  The Hawks would take advantage of a power play at 9:39 to get on the board .  Patrick Sharp fired a bomb from the point with plenty of traffic in front of the net, which helped the puck past Kari Lehtonen.  Duncan Keith and Andrew Shaw assisted on Sharp's 11th goal of the season.  Nick Leddy would score his third goal of the year at 16:09 in his first shift in over 13 minutes (more on that later).  Leddy found himself all alone below the right faceoff dot where he one timed a pass from Sheldon Brookbank into the net.  Patrick Kane picked up the secondary assist on the play.  Kane would add another assist just 67 seconds later as he carried the puck into zone between two Dallas defenders and then made a drop pass to the blue line.  Johnny Oduya was there to blast a shot through traffic and past Lehtonen for the game tying goal, his third of the year.

It would be Roussel that would score the eventual game winning goal via a penalty shot 3:01 into the 3rd period.  He was awarded the chance after Niklas Hjalmarsson hacked and slashed Roussel once he got behind him.  Patrick Sharp was taken down on an almost identical play earlier in the game but wasn't given a penalty shot.  The Hawks would have plenty of chances to tie up the game including a two man advantage for 1:14.  The execution on the 5 on 3 left much to be desired as all they seem to want do was try the backdoor play to Patrick Sharp over and over again.  Crawford was pulled with over two minutes left but again the Hawks kept trying to make the perfect pass instead of getting the puck to the net.

* Even though they scored two goals, the Hawks defensemen played like garbage for most of the night.  Brent Seabrook took his sweet ass time getting off for a change that directly lead to Stars first goal.  Niklas Hjalmarsson got caught flat footed twice in the neutral zone leading to a penalty in which the Stars scored their second goal and the penalty shot that gave them the win.  Nick Leddy chased the puck carrier behind the net which left Eric Cole wide open in front.  This led to Q stapling Leddy to the bench and putting Sheldon Brookbank back to the blue line.  With the Hawks already down to 11 forwards this gave them just 10 for much of the 2nd period when they are playing three games in four nights. Ugh.

* Speaking of Leddy's benching, it seemed to work as he was fantastic when he allowed to return to the ice.  He started a couple of good rushes with his legs in the 3rd period and seemed to be a man on a mission. I knwo the Hawks want to run their offense through the defensemen, but if Q is going to insist on dressing seven blue liners why not play Leddy at forward instead of Brookbank? He can skate with anyone and proved he scored from below the dots.  This point will be moot once Bryan Bickell returns.

* When Bickell does return and if Handzus isn't broken again it is becoming pretty clear that Brandon Pirri will be sent back to Rockford.  The most disappointing thing about this is that it doesn't seem to have an effect on Pirri's play.  One would think he'd be trying to give the Hawks every reason in the world not to send him down but instead he is helping their case.  He had his chance last night to impress by being put back on the second line but really wasn't noticable at all except when losing 11 of his 14 faceoffs.  Have fun slaying the bums in the AHL, it's been a slice.

* Andrew Shaw is our version of Steve Ott.  His teammates and fans love him but pretty much everybody else can't stand him and that's ok.  He had an impressive scrap with Roussel which was a perfect example of when fighting is good in hockey.  This guy had been taking runs at the Hawks' stars and enough was enough.  He also got smashed hard into the boards, behind the net, during the final shift of the game.  After taking a moment to gather himself up, he went right back to the front of the net to take more abuse.  Kudos to you, you wonderful meathead!

* Patrick Kane is a beast.  He is just toying with teams these days.  The most impressive play he made all night came in the 1st period.  He beat Alex Goligoski to the puck along the boards, skated through a check and drove hard to the net only to be stopped by Lehtonen.  This is the type of play the Patrick Kane of two years ago has no interest in making.
* There have been many villains in the long history between the Blackhawks and the (North)Stars.  Names like McCrae, Ciccarelli, Churla, Hatcher and Ott will forever be a part of Chicago's folklore of hate.  Antoine Roussel is doing a good job adding his name to this list of knuckle draggers.  Sheldon Brookbank was asked about his antics during WGN's post game show and said the league will catch up to him for his disrespect of the game.  I have to agree with him on that one.  If Roussel is going to keep taking runs at star players like Kane and Toews it is going to bite him in the ass sooner rather than later.  I would be shocked if a veteran like Ray Whitney hasn't had a chat with him already about this subject.  As far as the celebration goes I really don't have too much of the problem with it.  The world needs hated villains and it makes for great theater.  Should be a fun one next Tuesday when the Hawks travel to Dallas yet again. 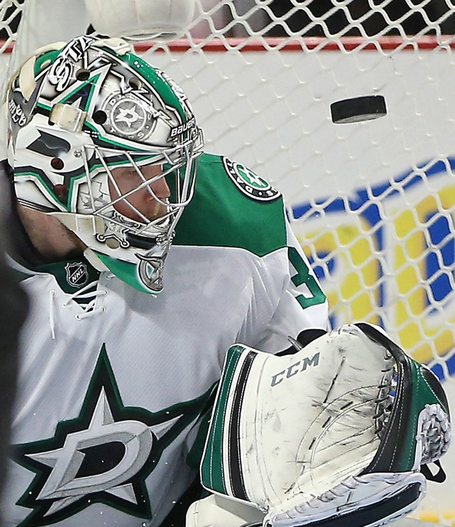 47 saves, that's all you need to know.  When Kari Lehtonen is one piece he is a damn good goalie.  I tweeted during the game that the game changed after Roussel's elbowing penalty but that isn't really true.  The game changed when the Hawks started getting traffic in front of Lehtonen because for the first half of the game he saw every puck shot at him.  A great performance, but the legitimate media though Shaw's fight was a better effort. But that's why those guys and gals get the press passes and us know nothing bloggers don't; they know what's up!