A back and forth Twin City affair ends with the Wild tasting victory.

Share All sharing options for: Blackhawks lose late lead, game to the Wild

What started out as a pedestrian affair gained steam as the game progressed. Credit where credit is due, the Wild protected their house very well tonight. They took an early lead, rolled through the Blackhawks counterpunch, and then snatch back two points late in the 3rd.

The Wild opened the scoring with a Matt Cooke goal 4:23 into the first period. Erik Haula chipped one in at the blue line, and then beat a flat-footed Seabrook to the puck in the corner. Torrey Mitchell would slide it to the late man Cooke who roped one passed Crawford on the glove side. On the next shift, Patrick Sharp wrangled in a stretch pass that had him one on one with Josh Harding. Sharpie made a nifty deke to send Harding sprawling, but failed to elevate the puck over his pad. Probably one the Shooter would like to have another crack at, as he was ferocious in the opening frame. The Wild did an effective job of forcing the Blackhawks to skate through the neutral zone as they did their best to muck it up. After the Sharpie breakaway, the made an effort to take away that stretch pass and it worked. A real ass period from the Blackhawks as the new lines tried to iron themselves out.

The hopes for a 2nd period counterpunch didn't gain any steam when Duncan Keith took a high sticking penalty just 11 seconds into the frame. But the Blackhawks would stymie the Wild on the opportunity while giving up only 2 shots. The Hawks would settle into their game a bit here, but couldn't get the puck to the net. With two consecutive long shifts in the Wild zone they failed to produce a shot. It wouldn't be until 8:25 into the period that they would register a puck on net. A Ryan Suter hooking call seemed like a great opportunity for the Blackhawks to tie the game at 1 all, but they failed to convert on the chance. Sharp would get tagged for a hooking call at 16:18 to put the Hawks back on the kill. Truth be told, I thought it was a weak call, but the refs missed a pretty blatant trip by Hossa early in the period so I'm not going to bitch. The Wild would score on the power play to go up 2-0. The credit is being given to Parise, but the puck was stepped on and slid in by Johnny Oduya. The Blackhawks would get a huge late period goal after Leddy shimmied a Wilding and fired a shot that Patrick Kane would retrieve from the half boards. After a little touch and go with Rozsival, Kane would wire one on net that got tipped by Nordstrom and finally potted by Jeremy Morin. Felt damn fine to see Morin get a goal considering the hell he's gone through this season.

The momentum would roll into the 3rd when Brandon Saad would forecheck the bejesus out of Ryan Suter causing a turnover in the Wild zone. Saad would need no help as he sniped it over Harding's shoulder to tie the game at 2. The Blackhawks would keep on rolling as Hossa would also go all Tom Berenger on Harding. The marker would put the Hawks up 3-2 and it felt like the team had finally arrived in the Twin Cities. But Minny would take the punch and keep on fighting. With under 6 minutes to play, the Wild would net their second power play goal courtesy of Jonas Brodin. I don't want to pick on the guy, but Oduya tried to block the shot and it careened off him and past Crawford. Crawford was none too happy, but it seemed like heat of the moment type stuff. He knows Oduya is trying to make a hockey play that and it went awry. With under two minutes to go, Marco Scandella would snap one from the blue line that found its way to the back of the net. Not a good sequence from a lot of Hawks on this one. Bollig got caught out of position, Seabrook set a partial screen on Crawford who whiffed with the glove. Not one that you want to give up that late in the game. After a "kind of but not really" frenzy at the end, the horn would sound and the Blackhawks have lost two straight.

- The Blackhawks are now 6-6-1 against Conference III opponents. That's not good. With the playoff emphasis now placed on division, I think we can all agree we want that to improve.

- Jen LC and I had a long twitter conversation last night about the penalty kill and it's evolution over the course of the season thus far. It's been ugly no doubt, but I contend that the bones are still there for a quality unit. Boy, is my face red tonight. Right now, I'm really at a loss to pinpoint the problem and I'm sure the coaching staff is too.

- The top line was absolutely hellacious tonight for the Blackhawks. Toews, Hossa, and Sharp were the top three Corsi For % on the team.

- The Wild played an excellent game tonight. They played THEIR game, and it was good enough to beat a depleted Blackhawks unit. I absolutely love Coyle and Brodin, and Nino Niederreiter is a top five name of all time.

- Can't say enough how happy I am that Morin got on the board tonight. A guy that could probably be on 20 other NHL squads, but can barely crack the Blackhawks lineup. He may have gotten decimated in possession stats tonight, but I want to see him flourish here.

- Coach Q line blender on full tilt puree to start the game tonight. Bollig opened up with Kane and Steeger, and then got double shifted right away. Keith/Hjammer as the opening pair only to IMMEDIATELY get switched out for Keith/Seabrook. Seriously, Hjammer's first shift was 15 seconds. I know we are down manpower, but holy hell was that insane.

- I thought VERSTEEG had a pretty strong game, but faded a little down the stretch. Some real nice plays in the first, specifically behind the net. He also picked up an assist with a nice little play for Hossa's snipe. Center is not the spot for him. I would love to see him get injected into the PK rotation, as it's one of the strong suits of his game.

- I'm starting a GoFundMe account to get Nordstrom enough Olive Garden gift cards that he can never not be eating a never ending pasta bowl. I liked his game in preseason, but he is overmatched in the corners a lot.

- Always good to do a TOI check on the first night of a back to back. Not as bad as you think, only Brookbank (4:59 ugh) and Nordstrom under 10 minutes. Gotta feel for Brookbank, he was good on D when he was in the rotation with Rozsival. Now he's just doing what the coach wants him too, and he is completely ineffective. And of course, 13 minutes of Bollig is bad.

Attach The Stone Of Triumph To... 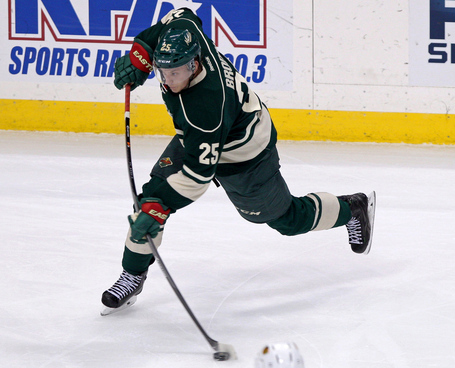 Jonas Brodin, you fickle headed boyman. I like your style.

Once again, I failed embedding the Corsi stats. Here is link to Extra Skater, where you can get Corsi and Fenwick and other information as well (learn about this stuff here). If anyone is a Excel '11 for Mac guru/wizard/werewolf, give me a shout because I could use some help.

The Blackhawks will look to end the mini losing streak tomorrow against the Quack Attack.

"A fundamental concern for others in our individual and community lives would go a long way in making the world the better place we so passionately dreamt of." - Nelson Mandela, 1918-2013