Antti Raanta could not come up with a stop in the shootout, as the Blackhawk lose 3-2.

You couldn't help but tip your cap towards the Anaheim Ducks while walking out of the United Center on Friday night.  They forced the Blackhawks to play their game and were able to grab the extra point in the shootout.  The Ducks used a constant forecheck to prevent the Hawks from getting any fast breaks out of their own zone.  They took away the Hawks' speed which is one of their deadlier weapons.  When the Blackhawks did have the zone the Ducks did a really good job a limiting their chances.  They held the Hawks to just 25 shots a goal, a far cry from the nearly 34 they have been averaging this year.

For the third straight game the Blackhawks gave up the first goal of the night.  Just over three minutes into the game, Corey Perry played dead in front of the net after getting whacked in the face.  He miraculously recovered to grab his stick, set up camp in front of the net, and tipped a Ryan Getzlaf shot past Antti Raanta for his 17th goal of the year. There was no excuse for both Niklas Hjalmarsson and Johnny Oduya to allow Perry to stand unmolested in the crease. It took all of 45 seconds for Ben Smith to tie the game with a wrist shot from the right circle that went in between the legs of Jonas Hiller.  Patrick Kane and Kris Versteeg assisted on Smith's fourth tally of the season.

Oduya would be called for closing his hand on the puck about eight minutes into the 2nd period.  When you have a lousy penalty kill, bad penalties usually end up in the back of your own net and that is exactly what happened with just one second left on the penalty.  It would be Perry again standing all alone in front of net preventing Raanta from seeing a wrist shot from Getzlaf.  The Hawks would get the equalizer (can you tell I've been watching the Premiere League this season?) with a power play goal of their own at 17:48.  Marian Hossa threw the puck towards the middle of the ice and found Versteeg all alone in the slot. Hiller made the save of Steeger's first shot but couldn't stop his put back of the rebound.  Brent Seabrook got the secondary assist on Versteeg's fouth goal of the year and second since his return to the Hawks.

Both teams were held off the board in the 3rd period and the overtime session but they weren't without their fair share of drama.  Dustin Penner was given a game misconduct in the final minute of regulation for shooting the puck after disagreeing with an offside call.  Jonathan Toews had a golden chance to end the game early in the OT but was stopped at the doorstep by the pad of Hiller.  A few moments later Marc Fistric had a goal waived off due to a goalie interference call on Saku Koivu.  There was no doubt Koivu ran over Raanta but the replay showed he was clearly pushed by Brent Seabrook.  Just after that Brandon Saad broke into the Ducks zone but was taken down by Ryan Getzlaf.  Although the fans in the UC wanted a penalty shot, Getzlaf played great defense and the refs made the correct call by not awarding Saad with a penalty shot.  Toews started off the shootout with a goal but it was all downhill from there.  Both Ducks shooters, Nick Bonino and Kyle Palmieri, were able to beat Raanta and the Patricks, Sharp and then Kane, were denied by Hiller.

* Antti Raanta is a decent backup goalie, not great but not horrible either.  His biggest problem right now is he is a tad bit slow to react.  It is clear to me that he has yet to adjust to the speed of the NHL game.  Teams that can get Raanta moving in the crease will have success against him until he can make the proper adjustments. Speaking of the crease, please stay in it until further notice. Thanks!

* The Hawks top line has been dubbed the "Red Wedding Line" by the Hockee Night guys because of way they have been slaughtering their opponents.  While they are dominating in possession and advanced stats every night they are not producing goals.  Friday night was the fourth game in a row where they failed to score a 5 on 5 goal.  This was the team's third straight one goal loss.  Any time the top line wants to find the back of the net would be nice. They have had their fair share of dominating shifts but they are not finishing off their chances.

* Poor Marcus Kruger.  I wonder what he could be if he got an extended run playing between some wingers that can play offense at the NHL level. Tonight he was stuck between Brandon Bollig and Joakim Nordstrom.  We know what Bollig is and Nordstrom is not NHL ready right now.  He needs to start super sizing every meal because he will not win any board battle for the puck he gets into.  He has the will but doesn't have the size.  I would love to see Kruger get a game with Patrick Kane and Kris Versteeg just to see what happens.  At the very least he would be able to keep up with them which is something Michal Handzus just can not do.  Stick Zus on the 4th line because he isn't even winning faceoffs either. He was just 6 of 17 at the dot tonight.  Kruger has shown improvements in the circle, in fact he lead the team by winning 78% (7 of 9) of his draws.

* Jeremy Morin is playing like someone who is tired of the riding the buses in the AHL.  He scored a big goal on Thursday night and was on the ice for both Hawks' goals on Friday.  I was happy to see him get some time with the 2nd power play unit.  He still had the least amour of shifts and ice time with just 14 shifts and 7:09 of TOI.  Despite the minimal ice time he still was able to finished tied for the team lead in shots with three.  I hope he does whatever it takes to earn more playing time but I have a feeling he will be back in Rockford once both Andrew Shaw and Bryan Bickell return to the lineup.

* If the Ducks ever want to part ways with Andrew Cogliano please send him this way.  I love what he brings to the game.  He is never going to threaten for a scoring title or be a finalist for any post season awards but he is a very valuable player.  He is great on the penalty kill and plays balls out defense.  He reminds me of Dave Bolland minus the troll factor. The Ducks will need him to contribute offensively come playoff time because you won't be able to pla the Getzlaf, Perry and Penner line every other shift in April and May.

* I can't remember the last time I watched a game with so many broken and dropped sticks.  It seemed that the ice was littered with at least one stick on every shift. 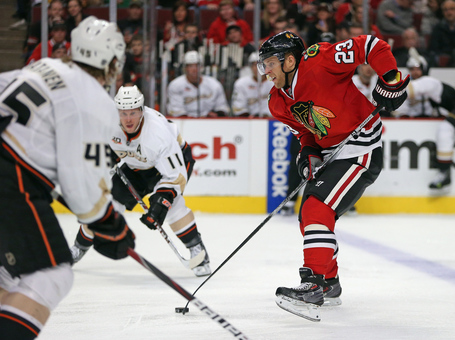 It's no secret I have a soft spot for Kris Versteeg but he is starting to get comfortable in Chicago again.  He had four points in his first four games back but faded down the stretch of the circus trip.  He was noticeable on the ice Tuesday versus Dallas, had an assist in Minnesota and had a goal and an assist on Friday.  I like Versteeg playing with Patrick Kane.  Those two can out skate anyone and create a lot of chances with their stick handling.  Please let Frogger get a shot with these two. I know Getzlaf had a goal and an assist too but Steeger gets the nod by playing for the home team and actually having some hair.