Blackhawks end their three game losing streak with a 6-2 win over the Panthers, but lose Corey Crawford to an apparent leg injury.

Share All sharing options for: Blackhawks Roll But Lose Crawford.

The opening period would begin with a bang but end with a buzzkill.  Tomas Kopecky took a run at Niklas Hjalmarsson, for some odd reason, as was called for interference just 57 seconds into the game.  The Blackhawks gained possession after the ensuing the faceoff, cycled the puck and Patrick ripped a one timer from the blue line with Andrew Shaw screening Scott Clemmensen.  Jonathan Toews and Patrick Kane assisted Sharp's 12th goal of the season.  The Blackhawks would score on the first half of a double minor penalty about eight minutes later to increase their lead to 2-0. Brent Seabrook noticed everyone in white was on the left side of the ice so he came down to the right circle where Brandon Saad hit him with a nice cross ice pass.  Seabrook boomed a heavy shot from the dot that blew past Clemmensen's glove hand.  Marian Hossa got the secondary assist on Seabrook's second goal of the season.  The buzz of a two goal lead was shortly killed after Corey Crawford came up lame after making a save.  Crow had to be helped off the ice and would not return to the game.  Antti Raanta would get tested right away as the Panthers would get 3:53 in a row of power play time but the Hawks would kill off both penalties.

The 2nd period got off to an even faster start than the opening frame as Marian Hossa increased the Hawks lead to 3-0 just 37 seconds in.  Jonathan Toews made a nice outlet pass to spring Patrick Sharp and Hossa on a 2 on 1.  Sharp took the shot and was stopped but Hossa skated right to the net to tip in the rebound for his 13th goal of the season.  The Panthers would get back into the game with two goals of their own.  Dylan Olsen scored after some sloppy play by Niklas Hjalmarsson and Johnny Oduya, who ended up screening his own goalie.  Five and half minutes later Raanta would try and pass the puck up the boards but it was intercepted and blasted past him by Marcel Goc.  The Hawks would get one of those goals back with just 2:34 left in the period.  Michal Handzus was in front of the net to clean up the mess from a Seabrook blast from the blue line.  Patrick Kane picked up the secondary assist on Handzus' second goal of the year.

The Hawks would regain their three goal lead with their third power play goal of the night 2:44 into the final period.  The play was nearly a replay from their first goal except this time Andrew Shaw deflected  Sharp's shot past Clemmensen.  Patrick Kane also picked up his 3rd assist of the night on Shaw's 9th goal of the year.  Brandon Saad would add his 9th goal of the season with breakaway tally in the final minute of the game.  Jeremy Morin and Kris Versteeg, who started the play with a great pass while taking a big hit, assisted on the play.

* So all of you Corey Crawford haters who say Crow is no good may get to see how valuable he really is and how terribly wrong and stupid you are.  Q said the injury is "not too serious" but why I am worried that his leg has been sawed off by a Civil War surgeon? Let's all hope he will not miss an extended period of time because the goaltending duo of Annti Raanta and Kent Simpson scares the ever living crap out of me!  Wasn't Dominik Hasek talking about a comeback in the summer? Asking for a friend.....
* Jen writes an article about the progression of Brandon Pirri who promptly gets demoted.  Then she writes one about how crappy the PK unit is and they go 5 for 5 on Sunday night.  Jen, please write an article about how poor I am so I can win the Powerball on Wednesday.  I think the PK success had more to do with how God awful the Panthers' power play is but, it was nice to see the forwards being much more aggressive on the kill than they have been for most of the year.  Confidence is a huge factor in special teams play so let's help tonight is something to build off of.
* Jeremy Morin had an assist and four shots on goal in just 11 shifts.  What's this kid got to do to get more ice time?
* Krys Barch is another untalented turd who has no business being on the ice with the highly skilled players of the NHL.  In a weekend marred with dirty plays, this guy decides to take two runs at Marcus Kruger.  I am not a fan of most Brandon Bollig fights but I did enjoy watching him pound Barch's face.
* You think Patrick Kane is on a mission this year?
* Good to "Red Wedding" line score a 5 on 5 goal.
* Brandon Saad had a season low 11:17 of ice time, which is over five minutes less than his season average.  Not sure what this was about but I sure hope this isn't a trend.
* Andrew Shaw now has nine goals which is more than Patrice Bergeon, Henrik Sedin, Tomas Vanek, Joffroy Lupol, Claude Giroux, Anze Kopitar and Evgeni Malkin. Not too shabby. 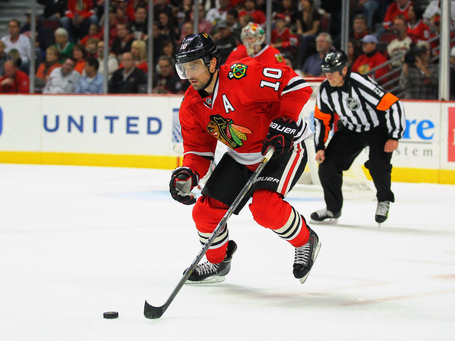 Patrick Sharp put up a goal and two assists tonight.  For some reason the Panthers' penalty killers thought it would be a good idea to give Sharp a ton of room at the point, not once, but twice and he killed them both times.  Sharp likes to score in bunches and with a possible messy goalie situation on our hands, scoring is very good right now.