Observations From Section 321: Third Time Is Not The Charm

Blackhawks drop Game 3 to the Wild 3-2 in overtime, but still lead the best of seven series 2-1.

Share All sharing options for: Observations From Section 321: Third Time Is Not The Charm

Before this series started I predicted that the Blackhawks would win it in 5 games, fully expecting the Wild to win one of the two games in St. Paul. It was apparent from the get go that Mike Yeo wanted his team to be more physical, especially with the Hawks defensemen. This strategy worked and caused the Blackhawks to play their worst defensive game of the post season. The Wild performed well in a must win game on their home ice. Hopefully this game will be a wake up the Hawks need to put this series to bed over the next two games.

The Blackhawks struck first with help from one of the best passers in the league, Patrick Kane. Johnny Oduya scored his first career playoff goal, a minute after the team killed off a penalty, at 13:26 of the 1st period. Marian Hossa brought the puck down near the goal line but was pushed off of it by Justin Falk. Kane jumped on the loose puck and found Oduya wide open on the backside for a 1-0 Hawks lead. After the opening goal the Hawks didn't seem like the same team. The Wild started to dictate the pace of the game and eventually tied the game at 18:30 of the 1st period. Corey Crawford could not control the rebound from a Cal Clutterbuck shot and Clutterbuck made a great diving pass to a wide open Pierre-Marc Bouchard, who converted on a great backhand, top shelf shot. Marian Hossa stopped playing defense on the play and was standing around watching as the goal was scored, which would become a theme for the day.

The game would remained tied at one until 3:09 of the 3rd period when Zach Parise scored his 1st goal of the series. Charlie Coyle took the puck away from Michal Rozsival behind the Hawks net and got the puck out to Parise, who scored on another great backhand, top shelf shot. Jonathan Toews got caught in no mans land which left Parise open for the goal. Duncan Keith would tie the game with just 2:46 left in regulation. Patrick Sharp got the puck into the zone dropped the puck off for Patrick Kane. Keith received the cross ice pass from Kane and buried a slap shot, with traffic in front, from the right side faceoff circle.

Jason Zucker would send the Minnesota Wild faithful home happy with the game winning goal 2:15 into the overtime. Matt Cullen was able to get the puck away from Johnny Oduya to Zucker, while sprawled out on the ice, and Zucker cashed in upstairs. Viktor Stalberg had a chance to put a body on Zucker but had no interest in doing so. So the Wild get on the board and have a chance to even the series up on Tuesday night. The Blackhawks need to play a much crisper defensive game in order to win Game 4. The forwards needs to remember to stay responsible in their own end and and not get caught to cheat going the other way.

* Corey Crawford was damn good today, and has been solid all series long. The only reason the game got to overtime was because of Crow's performance. Some people wanted to say that the OT goal was soft, just stop. The team around him did not do much to bail him out with forwards giving up on the plays that lead to all of Minnesota's goals. He is going to have to make an adjustment for Game 4 because the Wild scored all three goals by going upstairs. It looked like it took them two games to figure out they are not going to beat Crow by shooting low.

* Cal Clutterbuck continues to show both some actual hockey skill and that he can be a complete moron. He lead the team with 8 hits and was in Jonathan Toews ass all game long. But going after Toews nearly cost his team the game. Clutterbuck decided to mug Tazer in front of the benches instead of going off for a line change. This brilliant move left Duncan Keith wide open to bury the goal that sent the game into overtime.

* Speaking of Jonathan Toews, the Hawks will need him to show up some time soon. He has been pretty much invisible in this series so far.

* The Hawks seemed to lose nearly every important draw in Game 3. The Hawks got the Wild for icing just over a minute into the OT, but Andrew Shaw lost the draw to Mikko Koivou and they never gained possession. The game ended just over a minute later. Koivu was a beast on Sunday which was needed considering he was not very good in the opening games at the United Center.

* The Blackhawks defensemen are going to have to learn how to adapt to the pressure behind their own net. There were too many turnovers from below their own goal line on Sunday.

* If you are nervous about Corey Crawford, which you shouldn't be, be thankful the Hawks don't have Carey Price or Cory Schneider in the net.
*One would think all the time spent on the ice by Ryan Suter and Jonas Brodin will eventually catch up to the Wild's top defensive pairing.
* I spent the weekend in the Twin Cities and was able to take this gem before heading back to Chicago. 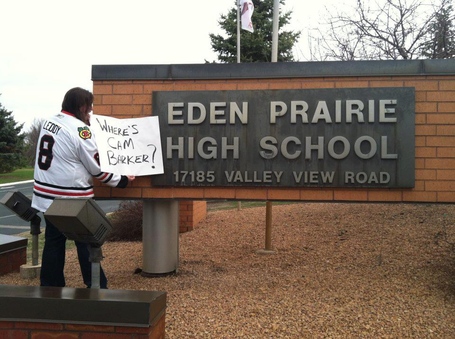