Just in case you needed any help working up a lather against the city of Boston and its inhabitants, here are some last minute "little balls of hate."

It seems that the trend this year is for opposing bloggers to take shots at Chicago and its lovely citizens as a precursor to the Blackhawks ending their team's season. I have yet to do one of these types of articles this year. It really isn't my style and plus there is fellow member of the Boysen family who handles hate better than I do at Runs On Duncan. But today Sarah Connors at Stanley Cup of Chowder decided run over the same old recycled jokes for a cheap laugh. I have decided to retort for two reasons; its the Stanley Cup Final and I will not stand for an admitted St Louis Blues fan to get away with such atrocities.

Our Boston counterparts decided to attack the easy targets like our accents and our food. Accents, really? Have you ever actually sat through an entire screening of Good Will Hunting without wanting to beat yourself over the head with a hammer? I would rather listen to alley cats in heat all night than two hours of Ben Affeck and Matt Damon's Boston accents. And if Boston's pizza is damn good please explain why people are so willing to hurl it at each other?

I will not attack such easy routes, instead I will mention some bigger crimes against humanity that Boston needs to pay for unleashing onto the universe.

Let's start off with Aerosmith shall we? Just another sad case of a once great band who ruined their careers by sobering up. The last 20 plus years of their career has been an abomination of terrible love songs used to feed their newest addictions of botox, face lifts, spray on tans and hair dye. Did we really need the "Amazing," "Crazy," and "Cryin" trilogy to extend the career of Alicia Silverstone longer than it needed to be? Steven Tyler is now a judge on Americal Idol for Christ's sake! Toxic indeed.

The next Klondike bar commercial should reward one brave soul with a delicious ice cream treat for sitting through 5 seconds of Southie Rules. The CIA should use this steaming pile of crap instead water boarding to gain useful information from terrorist suspects. And the family from the Dish Network Hopper commercials can go scratch too!

Whiny Boston sports fans should be proud of themselves and how they ruined the life of Bill Buckner, one of my favorite baseball players off all time. Everybody wanted to blame him for the Red Sox not winning the 1986 World Series. This is just as bad as idiotic Cubs fans who still think Steve Bartman is the reason the Cubs did not win the NL pennant in 2003. Let's ignore the fact Calvin Schrialdi couldn't retire the awesome Ray Knight after getting him down 0-2. Let's pretend the wild pitch Mike Stanley threw that allowed the tying run to score and the winning run to get into scoring position wasn't thrown. So the Game 7, 8-5 loss two nights later never occurred either? This is same group of fans who were proud of one of their heroes, Pedro Martinez, for beating up a 72 year old Don Zimmer. 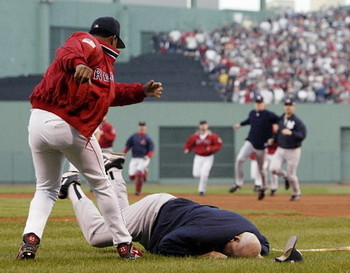 We can also thank the city of Boston for the Dropkick Murphys. I guess there is nothing wrong with them if you are into crappy poser punk rock. But their song "Shipping Up To Boston" is responsible for this joker to be a thing in Chicago:

Are you fucking kidding me? This guy makes Ronnie Woo Woo look like a Shakespearean thespian. I am embarrassed to be from the same city as this clown. So thank you Dropkick Murphys for making this possible.

Maybe the worst thing Boston has ever worst done to this world, even worse than the acting styles of the Wahlberg brothers, is Dane Cook. This guy is the biggest piece of untalented crap to ever hit the big time. Sure Chicago has Jim Belushi, but this unoriginal turd makes Jim Belushi look like John Belushi!

And just when you think Boston couldn't possibly inflict any more harm, the New England Patriots got one more shot in just before I finished writing this piece. Today they announced they have signed Tim Tebow, to play quarterbackof all things. You just couldn't let this hack ride off into sunset and start his career as a late night televangelist, could you? Just great! Now we have to listen to the national media "booyas" talk about how the great Bill Belichick is going to turn this clown into a superstar. Piss off already! Just for that I will leave you with one the greatest songs ever penned. A reminder of a 46-10 ass whooping handed out to Boston courtesy of Chicago!