Players, Parents Make The Most Of Prospect Camp

Share All sharing options for: Players, Parents Make The Most Of Prospect Camp

As always, the Friday of prospect camp was the busiest day. Johnny's West was packed with people watching the last scrimmage of the week.

Last year at this time, Brandon Saad was just a year off his Draft; and this season, he helped the Blackhawks win the Stanley Cup. Who knows where any of these players could be in a year from a now?

There were thirty prospects who are already drafted or signed by the Blackhawks, plus twenty players who attended as free agent invitees. Some players were first-time attendees; others already had a couple camps under their belts. Scattered through the crowds were members of players' families, watching their sons on the ice.

Valerie Broadhurst was one of those parents, standing along the glass at ice level. She had been there all week, eyes intently following her son Alex's play on the ice, occasionally giving a slap of encouragement on the glass. Her husband Terry was nearby, and their older son, also named Terry, came to see his brother play.

Terry, 24, already plays within the Blackhawks organization, having logged 75 games as a left winger between the Rockford IceHogs and Toledo Walleye in the past two seasons. Terry was never drafted; he attended the Blackhawks prospect camp for three years, from 2010 through 2012. He played three seasons for the University of Nebraska at Omaha before being signed by the Blackhawks in 2012 on a two-year contract.

The two brothers were able to share the 2011 and 2012 prospect camp experiences. Their first summer at camp together, they said they dreamed of playing together professionally one day, although they have previously played together in youth hockey. They're local boys, from nearby Orland Park, and grew up cheering for the Blackhawks.

However, the Broadhurst brothers are not the only Chicago-raised players at prospect camp. The Blackhawks' 2013 first-round Draft pick, Ryan Hartman, from West Dundee, was there, although he could not skate; he is still recovering from a prior injury. Anthony Lewis, also drafted in 2013, grew up in Winfield; Vincent Hinostroza, drafted in 2012, is from Bartlett. 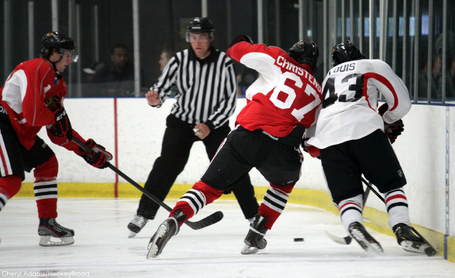 Christensen wasn't even originally supposed to be at prospect camp, but he has been on the radar for some of the Blackhawks staff. When a camp position opened up, he got a call.

His proud dad, Patrick, was at camp, camera in hand. Like the Broadhursts, the Christensens are hometown Blackhawks fans.

"I went to one of the Stanley Cup Final games, and this--" he nodded towards his son on the ice, "is WAY better for me." He grinned, and shook his head, looking as if he still couldn't believe that Dan was out there, skating with the prospects.

Like Terry Broadhurst, Dan Christensen wasn't drafted, either; but Dan knows Alex Broadhurst from playing in men's leagues together. Christensen, one of five kids, grew up playing elite-level youth hockey in the Chicago suburbs and skating on their backyard pond. Financial issues coupled with the cost of playing hockey in Chicago, and because his high school didn't offer a hockey program, shifted his sports focus to football instead. He went to Bemidji State University in Minnesota on a football scholarship as an outside linebacker; he graduated this spring with a degree in science education.

Dan plans to be a teacher, but obviously this was not an opportunity to be passed up. Even if it doesn't lead to anything further for him, he has had an experience that few non-drafted players ever get. And to do so for the team he's grown up watching, fresh off their Stanley Cup win -- do hockey dreams come much bigger?

At 6'2" and 225 pounds, Christensen has a football player's build and size, but looked totally at home on the ice among the prospects and other invitees. He had a regular presence in front of the net, and a willingness to show physicality, whether it was checking another player into the boards or fighting for the puck.

During warmups, Dan sailed past the corner of the rink where his father stood, and banged his stick along the glass, a huge grin lighting his face. His father's face lit up in return.

It was tough to decide which of the Christensen men was having a more enjoyable time at prospect camp.