Blackhawks President John McDonough will be bringing the Cup back to where it all began for him this Saturday.

Share All sharing options for: John McDonough Is Bringing The Stanley Cup Home

When the Chicago Blackhawks won their first Stanley Cup in 49 years, back in 2010, John McDonough used his day with the legendary trophy to spend it where he grew; the Northwest Side neighborhood of Edison Park. The rally at Brooks Park (7100 N. Harlem Ave) gave Edison Park residents a chance to congratulate one of their own for winning hockey's ultimate prize. The park was packed with Blackhawks fans of all ages, shapes and sizes to catch a glimpse of the greatest trophy in all of sports. 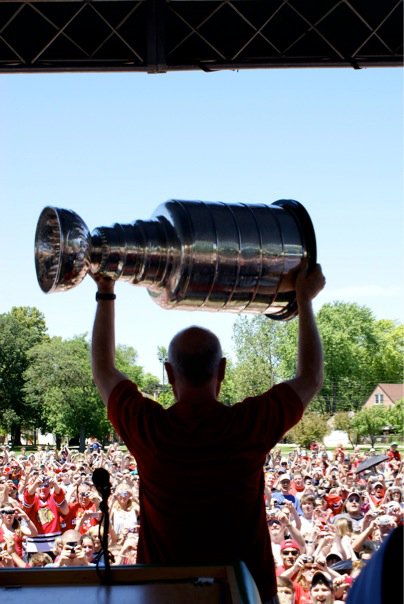 Ever since that fateful June night in Boston, Northwest Side fans have been wondering if John McD will be celebrating again in the park where he played Little League baseball. The answer to that question is yes and it will be happening this Saturday! The rally will begin at 11:30 am and will feature everybody's favorite opera singer Jim Cornelison kicking off the festivities with the National Anthem. It is advised to show up early as a big crowd is expected. Parking in the general area is very limited so if walking to the park is an option, please do. I am looking forward to attending the event and hope to see a lot of you guys out there!