On opening day of the 2013 season, Dan Carcillo was slotted on Toews' left wing. Why, there is no rational explanation other than because Joel Quenneville. Anyway, he hurt himself and didn't play for a month. When he got back, he had been replaced on the top line by the Man Child. He played sporadically throughout the regular season and four(!) games in the playoffs. He wasn't much of a factor, as you'd expect, totaling 4 points combined. However, he did earn himself a spot on the cover of Sports Illustrated and he cemented his place in Blackhawks lore after scoring the game-winning goal to extend The Streak to 24 games and the winning streak to 10 games. 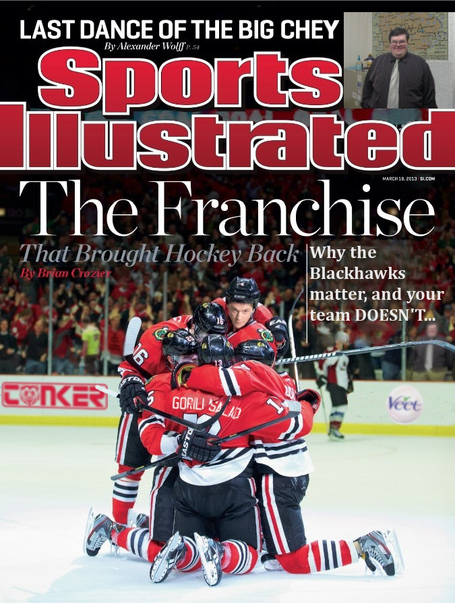 (stick tap to Fork, Morph, and all of the other goofballs over at Hockee Night for this photoshop)

Essentially, Carcillo's entire contribution to the 2013 season boils down to this highlight (via YouTube user "hockey4highlights").

There really isn't much else to say about his season, as he really didn't do anything else other than troll Vancouver in a meaningless game with his only other goal of the year. He has one more year left on his deal but I don't anticipate him being used much at all next year, as his role with the team has clearly and rightfully diminished.