The semifinal continues with our Quick Division competitors.

I willingly admit that Jonathan Quick scared me more than any other goalie going into the playoffs this year, but now he's just a bracket title, while the Blackhawks travel the world, spending their days with the Cup, wearing their Championship rings. Life is good, Hawks fans. Life is very good.

Your full bracket, for reference: 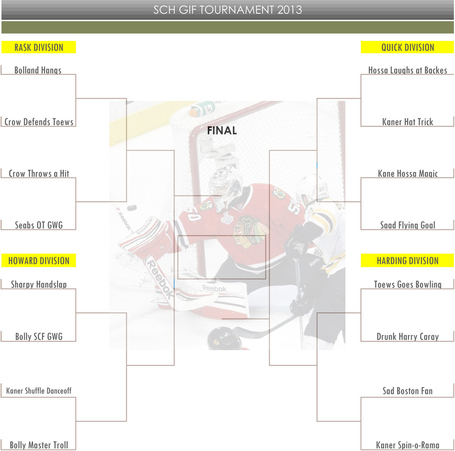 Another brutally competitive division, here, with a lot of HE IS MARIAN HOSSA AND YOU ARE NOT, and Kaner being Kaner like only Kaner can.

Hossa Laughs at Backes (as we all should) (submitted by girlphoenix):

So get out and rock the vote. Pick who moves on. You have 24 hours until the Howard Division semifinal, so be sure to get your vote in soon!