"Keep The Red Out" Terrible Idea Or Brilliant Marketing?

The Nashville Predators are trying to keep Blackhawks fans out of their arena this season.

Share All sharing options for: "Keep The Red Out" Terrible Idea Or Brilliant Marketing?

I am sure most of have seen this by now, but yesterday Jeremy Gover, at Section 303, reported on the Predators new "Keep The Red Out" campaign. In order to buy a ticket to one of the 3 Blackhawks game in the Bridgestone Arena, you will have to buy a ticket to one more Nashville home game during the season. This is an effort to stop making these trips three additional home games for the Hawks. The campaign is either a brilliant marketing scheme or just a really dumb idea. Considering this the same franchise who painted their ice yellow and has this really confusing sign in their arena, I am going with the latter. 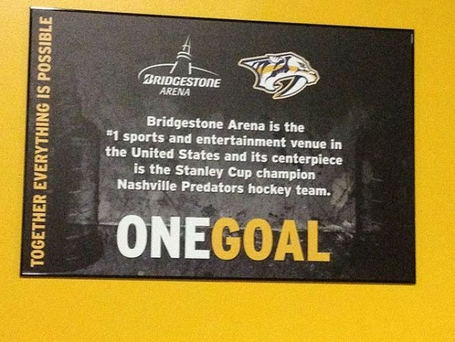 Did anyone with the Preds check with the Nashville Chamber of Commerce before launching this? I am sure all the bar, restaurant and hotel owners surrounding the Bridgestone Arena are thrilled with the idea of keeping Chicago fans, and their fistfuls of cash, out of their businesses. I went to Nashville for a Hawks game back in January of 2012 and had a blast. Every bartender and server we talked to said they love Blackhawk fans because we come out in droves and tip really well. Why would anyone in their right mind forfeit all of that because of some silly little pride thing? When the Hawks were brutal in the early 2000s, I am pretty sure upper management looked forward to when the Red Wings came to town and filled the seats and the cash registers of the United Center.

If the Predators brass don't want their stadium filled with red jerseys how come they are still selling group tickets to the games? I am part of a group, from Chicago, going down for the 4/12 game that was able to purchase over 50 tickets for the game. Why do they care who is in their stadium? A full stadium is a successful stadium regardless of the color of jerseys in the seats. Do the Predators have such a large inferiority complex that they can't have opposing fans at their games?

Having fans buy an addition ticket will not stop Hawks fans because tickets for two Predators games are still cheaper than a ticket for one game at the United Center. This will make the secondary market for the 3 games in Nashville explode. Quick, somebody check if David Poile just bought 10,000 shares of StubHub stock! Again, this will not stop Hawks fans from scooping up the tickets. If you tried to buy playoff tickets off the secondary market, you will know that Chicago is not scared off by high ticket prices.

Maybe, just maybe this was a brilliant scheme put together to have even more people come down and leave their money on Broadway Street. The reaction I have seen so far is that now even more Blackhawks fans want to come down for the games. The second you tell a passionate fan base they are not wanted, it just makes them more likely to come down in bigger numbers. Maybe this was the plan all along, but I doubt it.

The best way to keep opposing fans out of your arena is to put a better product on the ice. If the Predators were a better team, one that gets the local fans rabid, seats would not be available for the visitors. I am looking forward to my trip in April. Nashville is a great town, regardless if their hockey team welcomes me into their arena or not.