The first of the two battles to determine who goes to the Big Game!

When I volunteered to host the 2013 Gif Tournament here on SCH, it didn't truly register at the time that it'd be my first series as a contributor to this site. Insert jumping into the deep end, sinking or swimming, leaping before looking, and all other such related cliches right here. It's been awesome, and fun, and the best, but there are a few things I might have done differently, looking back.

Like, just for example, maybe possibly picking names for the two conferences before getting to the Conference Final Round.

As I'm a big believer in keeping things simple, stupid, we're just going to go with "Left Conference" and "Right Conference," for now. Thankfully there are no Alexander Ovechkin gifs here to confuse the issue. What a shitshow THAT would be (though I believe the commenters here have a much greater ability to determine left from right, and also I think SBN prohibits voting for the same gif twice).

Here are your Conference Final brackets: 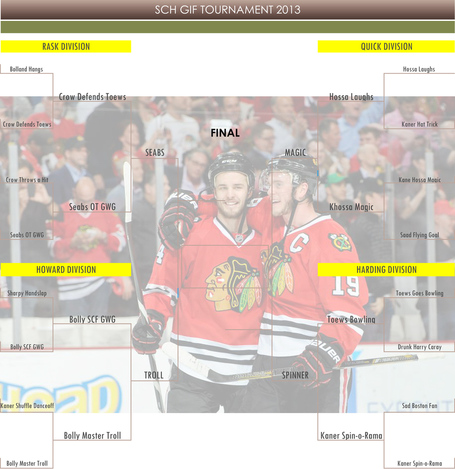 And here are your Conference Finalists!

First, our own Brent Seabrook fires in a game winning goal in OT in the playoffs against Detroit. He shouldn't have had to, Hjalmarsson's goal should have counted, and everyone should've gone home to sleep after regulation time. But when the refs shit the bed, Seabs stepped up (after an admittedly mediocre year), fired that cannon of a shot that he has, and then skated off triumphantly on one foot into an epic Blackhawks team celebration of their OT win.

And in the opposing corner, there's the outstanding trolling of Master Dave Bolland, Professor of Trollology, in a game against the St. Louis Blues. We hate the Blues. Dave Bolland apparently hates the Blues. This feint-and-flinch is so perfectly executed I almost expect to see the Hawks waiting in the parking lot, to give the entire St. Louis team 'two for flinching.'

We miss you already, Dave Trolland.

Get out the vote! And vote wisely, because the winner of this matchup will go on to the Incredible Final Round of what has become a truly epic gif tournament!